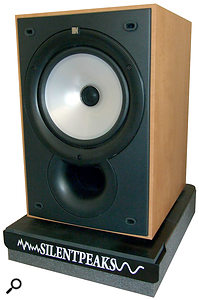 The SilentPeaks SPK Isolator, which uses dense rubber and foam to isolate your monitor speakers from a desk or shelf.

Silent Peaks are a relatively new Welsh company who specialise in affordable acoustic treatment, aimed mainly at the project studio. They offer a number of products, including fabric‑covered, mineral‑wool wall‑panels set into metal frames, which some people prefer to an equivalent thickness of acoustic foam. Corner bass traps are also available, as well as the speaker stands and acoustic microphone shields reviewed here.

Of course, when one acoustics company gets a good idea, the others tend to develop their own version of it, and the original Auralex MoPad foam speaker platforms are a case in point. Primacoustic built on the idea by adding a weighty steel plate, around 8mm thick, to the top of their foam speaker platform to provide extra mechanical decoupling — albeit at a much higher price point than straight foam. In my view, Primacoustic's Recoil Stabilizer is the best speaker platform of its type currently available, but you couldn't really call them cheap. While I wouldn't recommend buying such platforms if you already have some really good speaker stands, you'll find that they do make a significant difference where the speakers are mounted on a desk or shelf, even on 'professional' furniture designed with the studio in mind: the bass end invariably sounds tighter and desk or shelf resonances are greatly reduced.

Silent Peaks are aiming to occupy the middle ground with their SPK Isolators, by bonding a thinner steel plate (I'd estimate around 2mm thick) to the top of their speaker mounts where this curves down over the front edge, to improve the cosmetics. A thick, Neoprene‑like sheet is then bonded to the top of the steel plate to provide a secure mounting platform for the speakers and also to further improve the decoupling. The current design uses a flat piece of foam around 50mm thick by 240mm wide and 30mm deep as the base so there's no inbuilt provision for angling the monitors up or down, though you could add your own wedges to achieve this if required. They cost less than half of what you might expect to pay for the market leader, and if you want to improve the decoupling further, you could always stack two or three ceramic floor tiles on top, separated by non‑slip mat. Their performance is, as you'd expect, somewhere between that of plain foam platforms and those with a very heavy metal top-plate. They're definitely a good idea if you don't use speaker stands, as the difference in sound is quite noticeable. 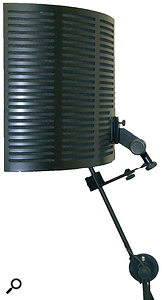 The Peakulizer: a lightweight, flexible acoustic shield for vocal recording.

Another innovative product that inspired a clutch of variations was SE Electronics' Reflexion Filter, the idea of which was to enable people to record vocals in a room that has little or no acoustic treatment, by treating only the area around the microphone. While SE's multi-layer curved screen remains probably the most sophisticated and elegant device of its type, we've seen several variations on the theme, with hinged flat‑panel screens, plain contoured foam, foam fixed to the inside of perforated metal and numerous other approaches. The theory behind the original Reflexion Filter is that the sides and rear of the mic are placed in an acoustic shadow to reduce the amount of reflected sound reaching the microphone, and they also slightly attenuate the level of the singer's voice reaching the room surfaces to reflect in the first place. However, in our experience, for optimal results you also need an absorber behind the singer to kill those over‑the‑shoulder reflections that would otherwise bounce right back into the live side of the mic.

Once again, Silent Peaks have come up with an original design that borrows elements from their competitors but without actually copying any of them. Around 30 percent wider than the Reflexion Filter, the Peakulizer Pro is based on a simpler construction, in which a layer of acoustic foam is bonded to a thinner layer of high‑density foam, which is in turn bonded to a slotted metal backing. It has the familiar curved shape but is also hinged in the centre to help with storage when not in use. Perhaps the most ingenious part of the whole design is the clamp system, which is based on those used on some heavy‑duty music stands, where a tapered fitting slots into a mating tapered receptacle on the stand. In this design, half of the fitting is attached to the inner edge of each of the two hinged panels in such a way that slotting them into the stand fitting also locks them together. The stand fitting then clamps onto a regular mic stand, keeping the weight of the screen reasonably centred. 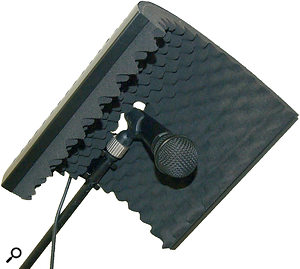 The Peakulizer Mini, intended for use with smaller instrument mics.Sonically, the screen produces a suitably dead zone around the mic, and doesn't significantly colour the sound as long as you ensure the mic isn't set too far back into the screen (this is true of all similar devices, and you should also avoid recording vocals either very close to a wall or very close to the centre of the room). Having the mic set level with the open mouth of the screen seems to work best. The Peakulizer Pro's large  surface works in its favour, but you still need that duvet or foam panel behind the singer's head and shoulders for the best results. Like SE, Silent Peaks also offer a smaller version, the Peakulizer Mini, which differs from the Peakulizer Pro in only a couple of ways: it is obviously much smaller; it includes a simplified stand‑mounting clasp, designed to fit around standard boom poles; and it has a hole in the middle so that you can use it with pencil condenser mics. I happened to be testing this out with a thinner than standard mic stand when miking a guitar cab, and found that the clasp didn't fasten sufficiently tightly. However, it's easy enough to slip a rubber washer in there, and Silent Peaks say that they're happy to provide one, and may even be able to offer an alternative clasp. It does fit most boom widths as standard, though, and is easy to use, offering similarly good results to those of the Peakulizer Pro.

I'm a great fan of all these devices, because in my experience they tend to give far better‑sounding vocal recordings than working in an improvised vocal booth, many of which produce a boxy tonality due to inadequate acoustic treatment. The only problem I've encountered when using screens of this type is that singers sometimes complain they can't see their lyric sheets, and eye contact with other performers can be compromised!

The Peakulizer Pro works perfectly well in a typical room and is around two thirds of the cost of the market leader. It seems, then, that Silent Peaks have got the balance of cost, build quality and effectiveness about right. They are by no means the only company manufacturing such devices, but it's good to see a quality British product in this marketplace at a competitive price.