If you listen to almost any major action film release or adrenalin-filled TV drama, somewhere along the line you are going to be pinned into your seat by a mega drum cue. Whether this is orchestral drums, electronic/industrial sounds or a hybrid approach, the bottom line — and it is usually a pretty big bottom line — is that the sounds are big and bold and pack a hefty punch. Assuming, of course, that the budget doesn’t stretch to putting an actual drum troupe into a recording studio for a day or two, a recent addition to your options is Sonuscore’s Trinity Drums, and this does bring an interesting — and very user-friendly — approach to creating these kinds of cues. 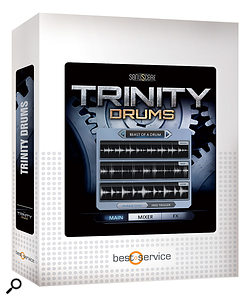 In technical terms, Trinity Drums is a download-only (around 5GB) sample library for Kontakt 5 (the full version; not the free Player version) supplied with a dedicated Kontakt front-end. The library is built around 100 rhythmic ‘themes’ where each theme is, essentially, a set of audio loops that form something akin to a ‘cinematic drum cue construction kit’. The themes are divided into two broad groups, Cinematic and Modern, with the former perhaps featuring more traditional drum sounds and the latter having a greater emphasis on electronic sounds, but this distinction isn’t universal.

However, the interesting — and rather clever — bit is how these loops are presented and accessed. In each case, every complete drum performance has been split into three layers — low, mid and high — and you can trigger each layer independently. So, if you want to drop out the ‘high’ (think more percussive and cymbal elements) while keeping the low (the really big drums!) and mid (still pretty big but including snares, toms and various electronic sounds also), you can do just that... or, of course, some other combination, and the software ensures that everything stays perfectly in sync.

On top of this, within each of the 100 themes, you also get five performance variations for each of the three layers plus some suitable single hits. These are all mapped across the Kontakt keyboard in a consistent fashion and, with just a little practice, it becomes almost embarrassingly easy to generate a complete drum-based cue with plenty of variations. You can tweak the sound further as the front-end also includes a basic mixer, a range of effects that can be applied to each layer individually and include EQ, distortion, compression, transient shaping, a filter and lo-fi options, plus send-based delay and reverb. You can also mix and match layers between different themes to expand the possibilities further.

Straight out of the box, Trinity Drums is easy to use and the sounds are as big and bold as you might ever require, but do watch those speaker cones! In use, my only (minor) criticism was that I would have loved to have heard more themes built just on acoustic drums sounds. Maybe this is something that Sonuscore might offer as an update or expansion pack for Trinity Drums? If so, I’d be happy to join the queue. As it is, the approach is a clever one, the front-end design easy to use and the supplied sounds/loops will undoubtedly appeal to a lot of media composers.