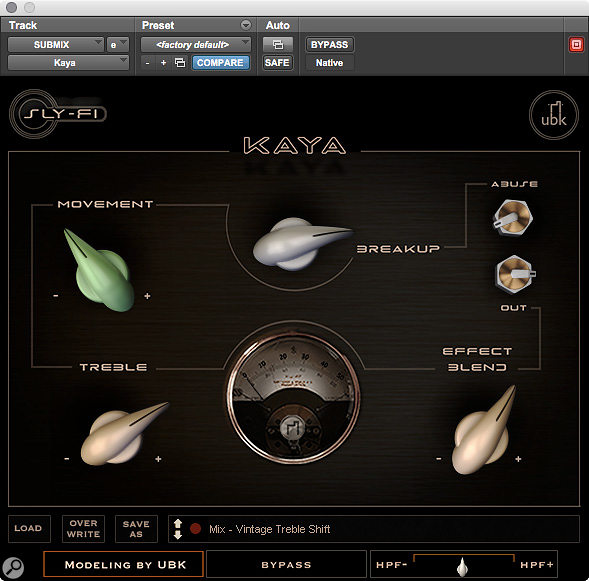 Back in SOS March 2016, engineer and producer S Husky Höskulds talked about his work on what would become the last album by jazz legend Ornette Coleman. Central to that work, and to many of his mixes over the years, was an Ampex reel-to-reel tape recorder modified to act as a distortion processor; indeed, for many years, this was the only piece of outboard Höskulds used, in a mixing process that was otherwise entirely ‘in the box’. Prior to mixing the Coleman project, however, he lent the unit to DSP whizz Gregory Scott, who has created a faithful model in plug-in form.

Named Kaya, the software version is refreshingly simply to operate, with just six rotary controls and a slider-operated high-pass filter — in Scott’s own words: “A one-trick pony, but what a trick it is.” Nevertheless, it does take a little bit of getting used to, as there seems to be quite a bit of interaction between the various parameters, and no documentation as to what some of them actually do. Two, at least, are self-explanatory: Effect Blend is a wet/dry mix control for parallel processing, while Out is an output gain setting (which affects any dry signal as well as the effected sound).

Out is paired with a second small control labelled Abuse which, as far as I can tell, sets the signal level going into the distortion process. The character of the saturation itself is controlled by three parameters labelled Movement, Breakup and Treble. Of these, it’s often only the last one that makes a radical difference to the sound. At its leftmost extreme, it makes everything sound sludgy and dark: not the sort of saturation that will make a lead sound stand out in front of the mix, but possibly ideal for sinister backgrounds, dirty bass tones and for warming up brittle recordings. As you move it further clockwise, the sound becomes crisper and brighter, but the focus remains firmly on the bottom end. If Kaya is really a one-trick pony, its trick lies in what it does below 300Hz or so. At mild settings, it introduces a rich, thick quality to the low mids, a little like a tape emulator with a very pronounced ‘head bump’. Used more aggressively, it generates a blown-out, broken-speaker-type distortion in the bass and low mids that is nevertheless usable, without loads of unwanted sub-bass or noise. The action of the Movement and Breakup controls on the sound is often subtle but, in general, they make the effect more pronounced as they are turned clockwise.

In practice, I got the most use from Kaya as a ‘warming up’ processor, used in the same contexts where one might otherwise employ a tape emulator or a console simulator. With its tendency to inflate the low mids and rein in other parts of the mid-range, it’s not as tonally neutral as those devices typically are, so it’s not always right — but at the same time, the coloration it introduces is what makes it special. At the top end, it’s never fizzy or spitty, but its real magic lies in creating the impression of a huge low end, without the negative consequences that usually attend bass boost. A very neat trick indeed, and one well worth the modest asking price.