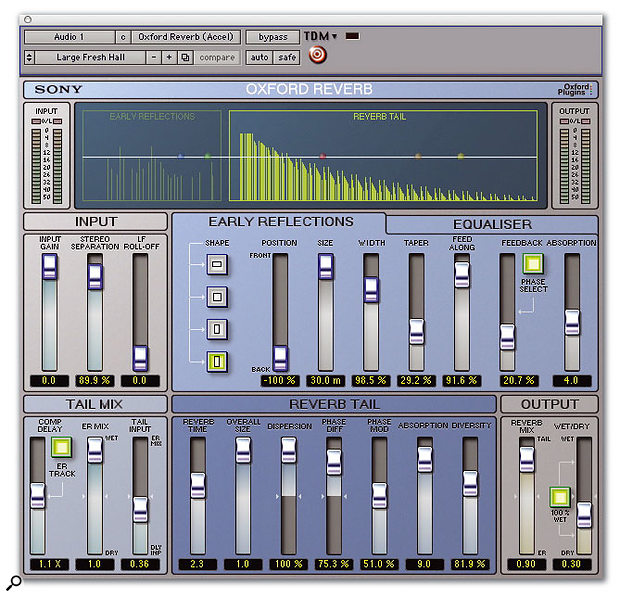 If you're looking for a high-quality reverb with plenty of user control, Sony's Oxford Reverb might be just what you're after.

With the current fashion for convolution-style reverbs such as Waves' IR1 and Trillium Lane's TL Space, it might seem odd that Sony have produced a conventional reverb simulation plug-in. However, Oxford Reverb shows that there's still plenty of mileage in the concept, not least through the amount of control it provides. Sony have chosen to avoid the fixed algorithm models that have come to be the norm in artificial reverb generators, and instead they provide the user with a significant number of variables to adjust, quite a few of which are not usually available on reverb plug-ins. This enables the user to build virtual spaces based on their artistic needs, rather than being restricted to a set range of algorithms with some user adjustments.

Oxford Reverb is available in TDM and RTAS versions. The former requires an HD or Accel system, and on installing you'll find two TDM versions available in your plug-in menu. The HD version takes one chip on a HD card, while the Accel version takes just under half an Accel chip. Bearing in mind that the presets take up minuscule hard drive space, it's clear that this plug-in imposes a much smaller load on your system than typical convolution reverbs.

The controls are arranged into six sections, the first of which is Input. Input Gain speaks for itself, while Stereo Separation allows you to reduce the stereo width of the input signal, with a minimum setting producing a mono input. A high-pass filter can also be switched into the path feeding the reverb processing — it doesn't affect the 'dry' path. 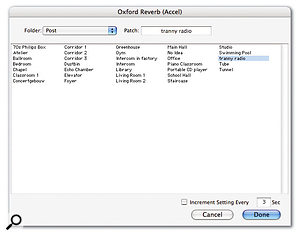 Oxford Reverb supports the new Patch Manager in Pro Tools 6.Next comes the Early Reflections section, beginning with a Shape control which allows you to choose one of four basic shapes for the 'virtual space'. Position determines the placement of the virtual sound source within the space, and Size sets the length of the space from front to back. The Width control adjusts the stereo separation of the room reflections, with the minimum setting being the normal placement. Taper controls the relative loudness of the reflections that have travelled a long distance compared to those that have only come a short way: increasing the Taper value brings up the level of the longest reflections, and at maximum, all the reflections will be the same level. Feed Along and Feedback control the density and recirculation of the early reflections. Turning on the Feedback Phase Selector switch results in softer reflections which can be more reminiscent of natural rooms, while Absorption controls the amount of high-frequency roll-off: higher settings will simulate spaces with soft furnishings and wall covering, while lower settings will result in empty spaces with hard reflective surfaces.

After this, the wet signal passes through an equaliser section consisting of five bands of sweepable parametric EQ, of which the top and bottom sections can be switched to shelving or 12dB-per-octave filter modes.

The Tail Mix section determines where the signal for the reverb tail processor will be fed from. With ER Track enabled, the range of the Comp Delay control follows the nominal size set in the early-reflection processing, giving a range of zero to two times the early-reflection Size setting. With ER Track disabled, Comp Delay provides an independent delay equivalent to up to 30 metres. The ER Mix provides a crossfade of the input signal and the output of the early reflections processor. Another slider sets up a crossfade of the output from the Comp Delay and ER Mix controls, which is then used as the input to the Reverb Tail section.

Here, Reverb Time sets the overall decay time, while Overall Size sets the size of the delays within the reverb tail. Larger sizes will give a greater impression of space, whilst small size settings build the density of the reverb up more quickly. Dispersion controls the rate and character of the dispersion complexity and texture, with a Phase Diff control to adjust the phase difference between left and right signals. Positive settings produce a wider and deeper stereo field, while negative settings will produce sounds that appear to come from outside the stereo field. Phase Mod adds a slight change to the reverb character that can often improve the realism, Absorption controls the HF absorption, and finally, Diversity controls the stereo spread of the reverb tail.

The output stage allows you to control the wet/dry mix, and also the relative contributions of the early reflections and tail to the Reverb Mix.

Sony have thoughtfully provided a good range of presets to get you going, and a study of them also helps to understand the functions of the different sets of controls at your disposal. To get a real feel of how Oxford Reverb would perform, I first opened up a track that I had recently mixed with a solo female vocal, acoustic guitar and a (real!) strings backing. I set up a parallel aux return track and inserted the Accel version of Oxford Reverb, then compared its Large Fresh Hall preset with the Long Concert Hall in Digidesign's own Reverb One plug-in, which was what I had used for the track. Once I had dropped the input gain on Oxford Reverb by 6dB to get a matching amount of reverb, the differences became clear: Oxford Reverb had the sense of more space and width, and added something extra to the mix. I then soloed each of the mix elements and found that vocal, guitar and strings were all enhanced. It's not that there was anything particularly wrong with Reverb One, but Oxford Reverb had that extra sparkle. 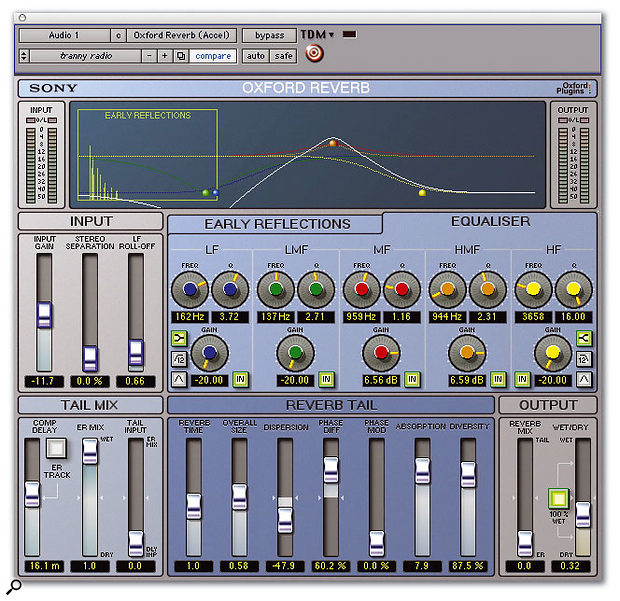 A five-band equaliser gives you considerable freedom to shape the sound.

I then moved on to another track to see how Oxford Reverb would handle drums. On this track I had used Waves' Renaissance Reverb on a Drum Plate setting. With the Oxford I first tried the Drum Room preset, but it wasn't quite what I wanted for this track. Then I discovered the Emulation presets, where there was an emulation of a 2.4-second EMT 140 plate, and that was the sound I was looking for, with a gorgeous smooth-decaying tail to boot. Flushed with this success I tried it on the vocal line of the same track where I had used a Reverb One Long Bright Plate setting, and again, the EMT 140 emulation on the Oxford provided that sound I hadn't quite managed to find with Reverb One.

Finally, I wanted to try the Effects and Post presets. I work a lot in drama post-production, and to have accessible good environment simulations would be very useful. For example, we often need to simulate a hi-fi or ghetto-blaster playing, and so need to treat music to sound like it is being played through speakers in a room. In the Post folder were several likely-looking candidates for this. I tried simulating a transistor radio and a hi-fi system, and processed the same piece of music my normal way using Waves' Q10 for the speaker simulation, then Trueverb to add the room effect. This is a two-stage process and always a bit hit-or-miss, although experience obviously helps. Then I tried the Oxford Reverb presets: unlike my music tests, I found that some of the post presets needed a lot of editing, but the convenience advantage of having EQ and room effects in the same plug-in is obvious — and now, of course, I have my own settings saved and ready for the next time. Some of the other post-related presets are useful, not least the Tunnel one, which would have come in very useful when I was editing a play where some children went into a disused railway tunnel!

All in all, this is an extremely useful reverb plug-in for both music and post applications. Sony have resisted the temptation to produce either a convolution reverb or a plug-in based on a restrictive set of algorithms: instead, they have provided a different set of controls in a different-sounding plug-in, which will complement any reverb plug-ins you already own. The icing on the cake is the promise of a surround-compatible version, which will be available as a free upgrade to existing users.

If you think that there's no room in your life for another reverb plug-in, Sony's Oxford Reverb might just change your mind.