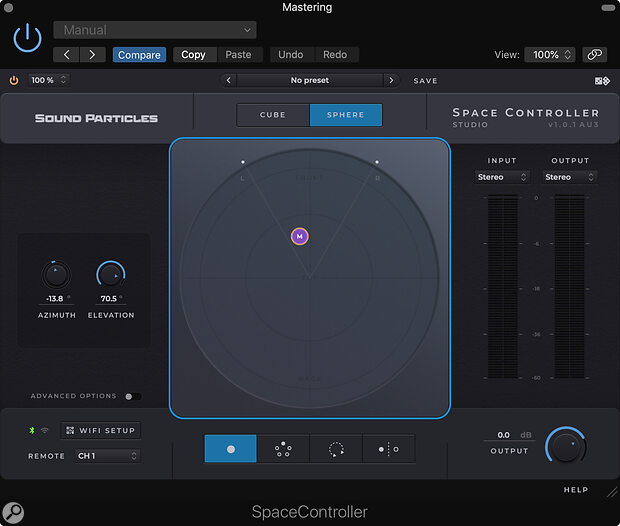 Wouldn’t it be nice if there were a simple, intuitive way to place sources in your immersive, surround or binaural soundstage? Well, now there is!

From our previous reviews of Energy Panner and Brightness Panner, you’ll know that Sound Particles have got multichannel panning down to a fine art, and their new plug‑in Space Controller builds on that in a way that’s both simple in concept and ingenious. It uses your mobile device as a pointer, so that you can steer the sound source in all directions just by pointing it as you would a laser pointer.

Immersive multichannel outputs or binaural processing also make use of the height dimensions, and this mode of control is much easier to manage than struggling with two joysticks. Thus, it could clearly be attractive to anyone involved in film soundtrack work and game design — it makes placing things like sound effects very intuitive — but there’s no reason at all not to use the system in music production, especially now that the streaming platforms are starting to pick up on more immersive formats.

Supporting plug‑in formats AAX, AU and VST, and with app control via an iOS or Android phone (or an iPod touch), there are two versions of the DAW plug‑in available. The standard version connects to the phone app over Bluetooth control and supports surround formats up to 5.1 as well as Binaural. The Studio version can operate via either Bluetooth or Wi‑Fi (beneficial where greater distances are involved between the phone and computer) and supports four stereo output formats and surround formats up to 7.1.2, including Dolby Atmos. With the version 1.1 update that came along as I was writing this review, there’s now the option to copy and paste automation to Dolby Atmos Objects and to pan in more audio formats: Quad, 4.0, LCR, LCRS, 5.0.2, 5.1.2, 5.0.4, 5.1.4, 7.0.4, 7.0.6, 7.1.6, 9.0.8, 9.1.8, 11.1.8. There’s also control over the LFE channel, while the number of communication links between phones and outputs has been increased to 128.

Multiple phones can be used to control multiple plug‑ins or, for example, to control the left and right channels of a stereo signal.

The Space Controller smartphone app is a free download. Once you have it talking to the computer, there’s an area of screen to tap to establish which way is ‘forward’: just aim the phone between your speakers or at your centre speaker if you have one, press the button and you’re all set. After that, touching the screen activates the panning, while releasing it leaves sound sources at their last position. If you prefer, you can set a latching operating — touch to pan, touch to stop. 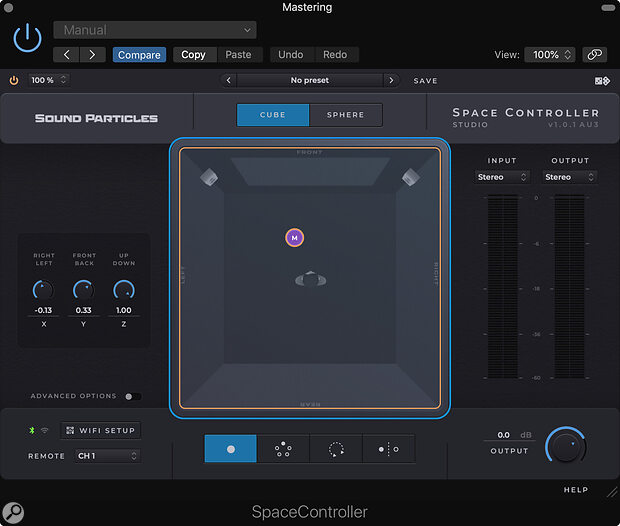 Cube mode, pictured here, is an alternative to Sphere mode shown in the main screenshot.

At the centre of the plug‑in window is a representation of the soundstage and the speaker positions. Here you select either Cube or Sphere Modes, and the display changes shape accordingly. If you’re working with Ambisonics or VR, the Sphere Mode might feel more familiar, while for the more traditional sound mixer the Cube Mode may be preferable. The control layouts in each mode are different. When in Cube mode, there are three knobs controlling Left/Right, Front/Back and Up/Down. In Sphere Mode there are two knobs: Azimuth and Elevation. Normally, elevation is from the speaker level upwards but you can configure the panning to go below if the project and the output format requires it. Click on the Advanced mode switch and you get a few more options. In both modes there are controls for Size and Gain, the former adjusting the width of the source(s). It’s also possible to lock individual position‑related parameters.

In addition to the two main modes, Space Controller offers several options for the way in which it handles the inputs, these ‘panning modes’ being described as Mono, Channels, Rotation and Symmetric, and the input and output formats may be set independently. Mono uses a mono sum of the inputs as the source, while Channels allows independent panning of the various input channels. Rotate works on the entire soundfield — useful, for example, in a movie when the viewpoint is rotating — while Symmetric Mode mirrors the panning moves, so can be used to control the width of the output. As an alternative to the usual plan view option, you can switch to a rear view, so as to get a visualisation of the panning height. 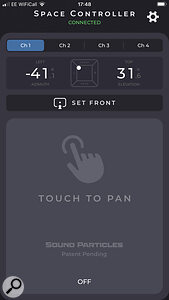 The phone app, which can connect to the DAW plug‑in via Bluetooth or Wi‑Fi.The plug‑in and app can also be configured so that multiple phones can be used to control multiple plug‑ins or, for example, to control the left and right channels of a stereo signal independently using a phone in each hand. It’s also worth noting that when there’s no paired mobile device, Space Controller can still be used as a more conventional 3D panner plug‑in.

Space Controller is, as I’ve already said, really intuitive. So much so, in fact, that there’s really not a huge amount else to say about the user experience; once you’re up and running it does precisely what it’s designed to do. To use Space Controller, the plug‑in is inserted into a channel strip or bus insert, after which you launch the app and make sure the plug‑in and app are set to the same channel. Bluetooth connection is as easy as you’d expect and in the case of Wi‑Fi you can scan an on‑screen barcode, which makes the process similarly simple. Set the centre position for your phone as described above, choose your input and output formats, select Cube or Spherical mode and, not forgetting to touch the phone screen to activate the panning, you then can start waving your arms about.

Sonically, the panning sounds smooth and the Binaural output when heard on headphones produces a believable immersive experience — something that came as no surprise, since it’s also the case for the existing Sound Particles panners; the USP here is the intuitive method of control. Despite the complexity going on behind the scenes, Space Controller is one of the simplest plug‑ins to operate and certainly makes multi‑dimensional panning more fun... even if you do run the risk of smacking your assistant in the face as you pan left!