Dynamics processors come into their own on drums, and especially on kits recorded using multiple mics. Whether we’re compressing the kick drum to get an even level, gating the toms to get rid of spill, or using a transient shaper to control the attack of the snare drum, there are roles for all of the established types of processing. However, these sometimes have their limitations. Once you start applying more than a few dB of gain reduction, for instance, it becomes increasingly hard to maintain transparency. Hard compression or limiting doesn’t just bring the excessively loud hits down in level: it changes the way they sound, too.

Available for all major native formats on both Mac and PC, and authorised online, Sound Radix’s Drum Leveler takes a slightly different approach. Perhaps acknowledging that the most effective way to achieve a subjectively even level without side-effects is by manually creating volume automation, it seems to be designed to behave a little like a human hand on the fader. Rather than responding simply to RMS or peak level, it identifies entire drum hits within the source audio and turns them up or down evenly for their full durations.

The Drum Leveler interface is a little reminiscent of the ancient Digidesign Sound Replacer plug-in, and of the Strip Silence windows found in some DAWs. It displays a mono representation of the input signal, scrolling from right to left, along with three horizontal lines that can be dragged up and down. These are, respectively, ‘high’ and ‘low’ threshold controls, and a ‘target’ level marker.

Any peaks above the high threshold or below the low threshold are ignored, but those that fall into the window between them get turned up or down as necessary to get them closer to the target level. If you want to achieve an effect comparable to conventional compression, for example, you’d set the thresholds so that louder parts of the signal exceeded the low threshold, but nothing ever got as far as the high threshold. That way, the most prominent hits would be adjusted in level, while quieter hits would be left alone. Alternatively, by bringing down the high threshold to the point where all the loud hits exceed it, you can set up Drum Leveler to focus its action only on ghost notes or spill. 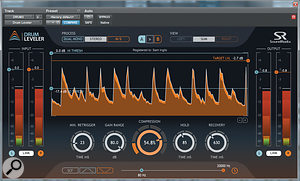 You can fine-tune Drum Leveler’s detection algorithm by applying sharp filters, set either to attenuate or (which is often more useful) to boost the high and low extremes of the frequency range. There are also controls that roughly correspond to the ratio, attack and release settings on a conventional dynamics unit, but their function is not the same by any means. The Hold and Recovery times determine the ‘shape’ of the processing applied to each hit. For example, by setting the Hold time to the full length of a beat in the song tempo and the Recovery to zero, you’d force Drum Leveler to jump to a new gain level at the start of each beat, which would be fixed until the next one came along. By contrast, a short Hold and long Recovery means the gain is smoothly adjusted as each successive beat decays. In both situations, though, the key is that the dynamic ’shape’ is largely independent of the level, so you don’t get that effect where loud hits are obviously compressed.

The Compression dial is akin to a ratio control, but runs from -100 to +100 percent. Positive values mean that hits falling within the threshold window are forced towards the target value, thus reducing the dynamic range only of those hits to the point where, at the +100 percent setting, all of them are made to hit the target precisely. Crucially, though, this doesn’t necessarily mean you’re reducing the dynamic range of the signal as a whole. For example, if you set the thresholds so that only loud hits fall into the window, you can then raise the target value to ensure that all these hits are lifted above the rest of the signal. Alternatively, you could set the threshold window to pick up only ghost notes on the snare, and apply a very low target value to reduce these in level compared with the louder strikes.

Turning the Compression dial in the other direction makes it act as an expander: hits that are already above the target level are boosted further, while those below it are attenuated. Again, though, this applies only to hits that fall within the window between the two thresholds.

Apart from input and output gain sliders, the only other control is Min Retrigger, which in effect allows you to specify a minimum duration for detected hits. When used on a stereo channel, you also get the option of running in dual mono and Mid/Sides modes. Each of these gives you the option to switch the main graphic interface to show either of the halves of the signal instead of the default Sum; doing so superimposes the other half in a curious diagonal ‘ghost’ display to the left or right.

The Drum Leveler interface is elegant and fairly simple, but getting to grips with it might involve ‘unlearning’ some of your expectations about conventional dynamic processing — many of the tasks that would traditionally be undertaken with an expander or gate are better done here with positive Compression values. Once I’d figured this out, I found it an extremely useful plug-in, and capable of results that simply wouldn’t be possible with a conventional dynamics unit. At the basic level, it can ‘even out’ unwanted dynamic variation in a more natural and controllable way than simple compression. With careful setting of the time constants, it can be impressively transparent, preserving the sound even of drum hits that are being attenuated or boosted quite a lot; and, if you so desire, it can provide effective control over the level of loud hits without bringing up the rest of the kit. Used on a close-miked snare track, it can completely alter the balance between ghost notes and full hits, to the point where it’s possible to reverse the dynamics of the track altogether if you really want to. And if unnatural chopping and gating effects are what you’re after, these can often be achieved by radical settings of the time constants.

Despite the name, moreover, I found Drum Leveler equally useful on other instruments. Percussive acoustic guitar playing benefited greatly from its ability to tame rogue peaks in a clean and colourless fashion, but perhaps my favourite application of all was on bass guitar. Whenever I try to use an ordinary compressor to flatten out an uneven bass track, I find there’s only so much you can do before the sound itself becomes lifeless and dull. There are no such problems with Drum Leveler, which simply makes it sound as though the player had better control!

Everything it does, Drum Leveler does pretty well, but there are a couple of things that might make it even more useful. For one thing, it doesn’t currently seem possible to apply true hard gating — I wanted to gate the kick drum on one of my test tracks, and whereas this proved straightforward with a conventional gate plug-in, Drum Leveler always seemed to let through a small amount of spill. For another, I can imagine that the addition of a side-chain input would enable plenty of creative applications, such as chopping up a pad sound in time with a kick drum. At the end of the day, though, these are more in the realm of suggestions for a future version than serious criticisms, and Drum Leveler is a most useful plug-in just as it is.

The only direct alternative I know of is Melda Productions’ MDrumLeveler, which looks to be a more complex take on the same idea.

Drum Leveler is an innovative and user-friendly processor, and is capable of transparently adjusting the level of drum hits in a way that often isn’t possible with conventional compressors.