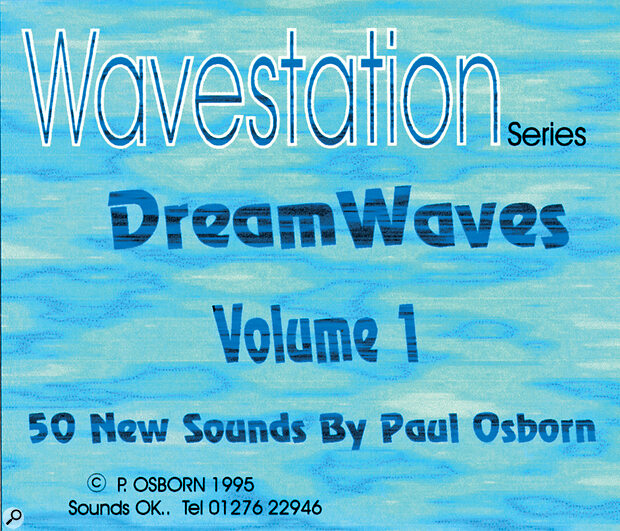 Considering that the Wavestation first emerged in 1990, it's aged remarkably gracefully and, relative to some of its contemporaries, still remains quite desirable. Me? I'm a Wavestation SR owner, and I like the sounds enough to wish that I wasn't — the more inviting user interface of an A/D or keyboard version would be preferable. The oft‑touted analogy about editing an SR is that it's like wallpapering the hall through the letter box, which would be rather amusing if it wasn't so true (I've tried both, by way of comparison, and can report that the results of my wallpapering were marginally more consistent than the SR editing). So with this in mind I was more than a little interested to check out the fruits of someone else's labour (Paul Osborn, the sound designer), as demonstrated by these two sound cards.

Let's do this systematically and look at Volume 1 first. Dreamwaves by name, Dreamwaves by nature, this card is full of fantastic pseudo‑analogue pads, sweeps and atmospherics. Quite rightly, the first performance is 'Sensory Whorl', a wave‑sequence of cascading electric keys, panning and modulating, with a dark sawtooth pad underneath. The sound demonstrates a slightly shrill characteristic, in common with some of the other performances on the cards. I guess as a bid to make the cards' sound on a par with the brightness of contemporary synths it's understandable. Anyway, it's easier to adjust a sound that's a tad bright than one that's too drab and dark — normally a tweak of the HF damp parameter in the reverb patch did the trick.

Other atmospherics of real note are 'Dream Time', 'Pluto', and one deliciously entitled 'Venus in Motion'. There's plenty in the way of polyphonic analogue emulation, an area in which the SR's factory presets are lacking a little. 'Lazy Faze', 'Soft Synth', 'Pulsar' and 'The Year 1975' may not be glamorous, but they're expressive and eminently useful. Overall, Dreamwaves Volume 1 is very impressive, with imaginitive use of the mod wheel and attack velocity for variation.

The second card isn't quite so arresting. There are plenty of guitar performances to investigate, but for my money they aren't sufficiently different to the Wavestation presets. There are some notable flashes of brilliance, however: some of the wave‑sequence patches are outstanding, and 'Tribal Instinct', 'Gabriel's Drone' and 'Implosion' will have people asking "where the hell did that come from?", while 'Western Sunrise' teleports you to swaying cornfields and rolling in the hay with the Boston Pops.

Neither card is heavily reliant on chorusing effects to obtain head‑turning treatments that are difficult to translate in multi mode, although stereo panning is much favoured for their left/right dynamics. As 'inspiration catalysts' these two cards do the job. Volume 1 is almost consistently excellent, while my personal preferences tended to steer away a little from Volume 2's guitars and ethnic clanging. Nevertheless, both are well conceived and classy. Christopher Holder