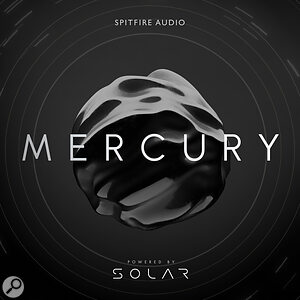 Though it’s a cliché to say ‘wonderful’ and ‘weird’ in the same breath, I have to say that Chas Smith’s instruments are genuinely weird and wonderful — delightful to behold, too. A native of New England, Smith describes himself as a professional welder and guitar player who spends his life making things — “sometimes they’re music, and sometimes they’re metal objects.” This defiantly independent welder‑composer tired of his job working on film studio lots and found fulfilment creating his own music and collaborating with like‑minded artists. One fruitful hook‑up was working with Hans Zimmer on the Man Of Steel soundtrack (arguably the perfect gig for a keen pedal steel player and metal worker), while other high‑profile film credits include Dune, Dunkirk, The Hunger Games and Interstellar.

Inspired by sculptor Harry Bertoia and maverick instrument builder Harry Partch, Smith has created a great number of musical ‘acoustic sculptures’, 14 of which were sampled for this library after film composer Charlie Clouser urged a collaboration with Spitfire Audio. Wander into Mr Smith’s chaotic workshop and you might see the ‘Lockheed’, a large flat square of resonant titanium studded with rods and angular protrusions which the inventor plays with a bow and mallets, producing agonised screeches and muffled low‑pitched groans reminiscent of the drone of flying engines.

In addition to reverberant clangs and monumental industrial noises, Mercury also excels at quiet, eerie and mysterious textures. ‘Illuminate’ is a mystic‑sounding pad which gently fades and pitch‑shifts, ‘Copper Box Tale’ sounds like a distant choir heard in a snowstorm, while the versatile ‘Pez Eater’ patches give you high‑pitched bells, hybrid orchestral pads and drones. Spitfire have harnessed Smith’s raw samples to their new Solar synthesizer powered by the latest version of the company’s eDNA engine, opening up new universes of multi‑effects and mod‑wheel‑controlled sonic manipulation.

Perfect for sci‑fi, fantasy, psychological dramas and imaginative horror productions, this strangely affecting library explores the outer reaches of resonant metallic overtones. My only reservation is Spitfire’s perennially annoying GUI design, which devotes acres of space to three oversized controls while squeezing text down to a tiny, unreadable size.