There are so many guitar tuners on the market today that it's hard to get too excited by them, but the TC Electronic PolyTune certainly caused a stir at the recent Winter NAMM show, as it uses polyphonic pitch‑detection to show you the tuning status of each of your six strings simultaneously. I suspect that it's based on the same technology that the company use for pitch‑detection in their vocal-harmony processors that can follow guitar chords, and was keen to find out whether it would really work, particularly given its attractive price (£75$100). 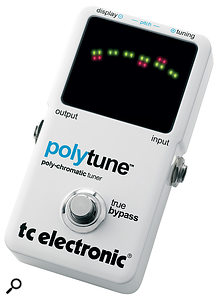 A world first? TC Electronic's PolyTune allows you to tune all your guitar's strings at once. Housed in a compact, die‑cast pedal format with a hard‑bypass footswitch, the PolyTune can be powered from a 9V battery or an external power adaptor (as on the similarly priced Boss tuner), with a link‑through socket for powering additional pedals. Access to the battery compartment is achieved by removing the bottom plate, fixed in place by a large recessed screw that can easily be undone using a coin as a screwdriver. The reference pitch can be set from 435Hz to 445Hz in 1Hz steps, with provision for dropped tunings from Eb down to B.

If one string is out of tune, picking it will cause the tuner to automatically switch to a conventional chromatic mode, for accurate retuning to 0.5 percent of a cent (one two‑hundredth of a semitone) accuracy. But if you strum all the open strings on the guitar at once, you can see at a glance which ones need tuning. Then you just pick the offending string and the display works like a regular tuner. I should mention that it works like this with bass too, when you set it to the aptly named Bass Mode.

In the polyphonic mode, the display shows six rows of LED meters, with 'in tune' in the centre and two further LED pairs above and below to denote how sharp or flat the notes are. The accuracy is plus or minus one cent in this mode. In single‑string chromatic mode, you can select from a conventional needle display mode or a strobe display. Tuning preferences, accessed and set by two recessed buttons on the rear of the unit, are stored when the unit is powered down. Note that with the exception of the drop tunings already mentioned, Poly mode can't be set to work with non‑standard tunings such as DADGAD or open chords — although the chromatic mono mode can still be used for these tunings. Perhaps we'll see DADGAD or custom‑tuning versions in the future...

Another neat feature of the PolyTune is that the display brightness changes according to the ambient light level, which helps to conserve battery power while still giving plenty of brightness and contrast in all locations, indoors or outside. This feature didn't seem particularly obvious or distracting in use either: I tried looking at the display in dark corners and in daylight, and it always seemed bright enough.

When I tried this device out, it worked well with both the neck and the bridge pickups, although the manual recommends the neck pickup and thumb strumming for the most stable display. The tuning reference is displayed briefly when the unit is powered up, and the display seems very positive, both in poly and chromatic mode. If you're in an environment where the guitar is picking up a lot of interference (such as directly in front of the laptop I'm using to write this), the display sometimes flips to Poly mode when you're picking a single string, but under all normal conditions it works very solidly indeed, and with more than enough resolution to tune accurately. The needle mode shows the string pitch by note name: all the needle LEDS are green in the centre 'in tune' position and mainly red if you're out of tune. In Stream (strobe) mode, you get the same note‑name display, above which the window shows a series of long dashes that drift either left or right if you're off‑pitch but remain stationary when the tuning is bang on: the faster the drift, the larger the tuning error. The Poly display — always the same regardless of which chromatic display mode you choose — is particularly useful if you have a guitar with a floating vibrato unit, as adjusting one string affects all the others. Using PolyTune, you can quickly check that you're still in tune across all six strings. You can get more accurate tuners for precise setup work (such as those made by Peterson), but in reality the tuning stability of most guitars means that the PolyTune is more than adequately accurate for general tuning purposes.

I have to conclude that this sturdily built little tuner does pretty much what it claims to, with no fuss and with a nice clear display. Its compact format makes it easy to fit into a pedalboard, and its true bypass means that it won't compromise your tone. I suppose it is only a matter of time now before everyone starts offering polyphonic guitar tuners, but at the moment this one has the market to itself. While most people can get by with a standard guitar tuner, the Poly mode certainly makes the process speedier, and it's perfect for a quick, single‑strum tuning check between takes. Paul White

A worthwhile evolution in guitar tuning that genuinely speeds up the process of getting your instrument in tune. Particularly useful if you use a guitar fitted with a floating vibrato unit.