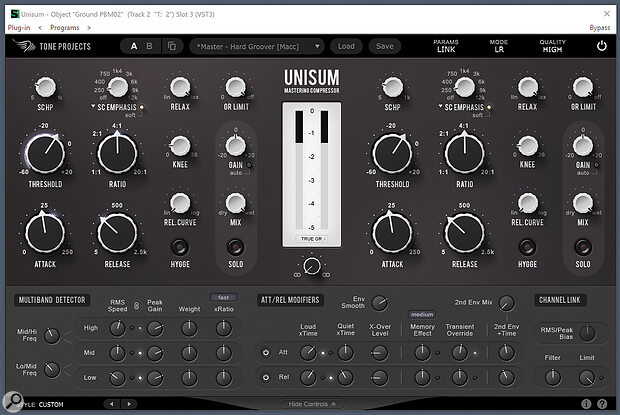 Unisum boasts a unique array of advanced parameters, but achieving good results isn't as daunting as you might think.

With so many controls, the initial impression of Unisum is pretty daunting, but not all of its controls have to be used all of the time and you might not use some very much at all. Furthermore, the option of sticking to the presets (created both by this plug‑in's designer Rune Lund-Hermansen and some excellent mastering engineers, none of whom had a particular technique they wanted to push) and adapting just the standard compressor settings in the main section is genuinely viable, because rather than try to 'knock your socks off' with what the plug‑in can do, the presets are useful. So heavy users of analogue mastering kit still have an accessible starting point.

Another approach you can try, without going 'all in', is to start by choosing one of the 'styles', and then listening to what happens as you try things out. After all, whatever the technical description (who knows what 'RMS Speed' is doing in variable increments from 0.500 to 5,000 Hz?), it's only possible to discover what a control does to the music when it can be heard, and what really matters is what decisions an engineer makes based on what they can hear. With the Unisum there are sometimes more things to listen to and more decisions to make than with most compressors, but with practice it becomes easier to find the right ball park in which to begin tweaking.

With all that in mind, I'll approach this review in three stages. I'll first consider Unisum as a broadband compressor, a role in which it is flexible and sounds extremely good, and has a couple of additional features that work very well in mastering and on the mix bus. Then, I'll explore the multiband side-chain controls, which allow the tuning of the compressor's action in three bands. Finally, I'll move on to the other controls, which affect aspects of the other two stages and really set this plug‑in apart from the competition. But it's worth me saying up front that I think the first stage (broadband compression) on its own is already worth the price of admission.

The main section of the GUI hosts a standard roster of controls, in the form of neat Sontec-styled knobs, for two-channel (L‑R or M‑S) broadband compression: Threshold, Ratio, Attack, Release, make-up Gain, a continuously variable Knee and a gentle 6dB high-pass filter on the side-chain. There are some less familiar functions too, all of which are nicely explained by switchable tool-tips: three kinds of broad side-chain filters (emphasis, dip and LP) which increase/decrease the sensitivity in the area of the chosen frequency; a Relax function, which reduces the amount of compression as it is reaching its maximum, making it less...