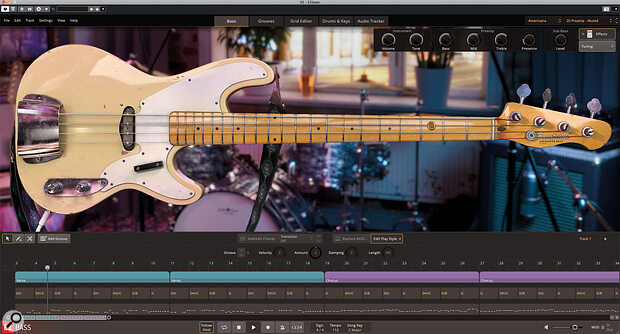 As with EZdrummer, Superior Drummer and EZkeys, Toontrack have generated a tempting stream of additional content for EZbass since it first appeared. The latest offering is the Americana EBX and, while it might be tempting to think that the option for an additional vintage bass (the EBX is built from sampling a late‑’60s Fender Telecaster Bass) might not be an essential purchase given the vintage model included within the core EZbass package, don’t jump to any conclusions just yet; there is musically more to this (virtual) instrument than just Americana.

Americana EBX follows the format of the previous EBX releases. You therefore get Toontrack’s beautifully detailed sampling of the instrument itself, plus a collection of MIDI grooves that provide performance options that fit within the broad banner of Americana. The sampling provides two versions of the bass; one played via conventional fingerstyle while the other uses a muted thumb approach. For both styles, you also get a range of presets from clean DI through to gently overdriven amp tones plus, of course, the additional tone‑shaping tools built into the EZbass interface.

Compared to the core EZbass vintage instrument, while in a similar ballpark, the Americana model does feel different. Describing bass tones is a subjective thing, but you get a somewhat softer, less strident, mellower sound here. Indeed, exactly the kind of bass tone that you might expect from a very professional session musician wielding a vintage instrument and who knows his performance needs to serve the song, provide a solid foundation, and not pull focus away from the other, more prominent, elements in the arrangement.

The playing within the supplied MIDI grooves suits the sound perfectly. The grooves provide tasteful performances that have plenty of character and feel but without any flashy elements that might pop out of the mix. As such, while it says Americana on the ‘box’ (er... download), these performances are hugely flexible and would work in a diverse range of musical contexts. If you like this groove content, you can supplement what’s included here with the additional purchase of the Americana EZbass MIDI pack (which complements similar Americana MIDI pack add‑ons for EZdrummer and EZkeys). Having auditioned this alongside the EBX, it provides more of the same — which is to say it’s an excellent all‑round addition to your groove collection and suitable for a whole host of musical styles.

While metal‑heads might not feel the Americana EBX is an essential addition to their EZbass arsenal, I’d encourage regular EZbass users in almost any other style to give this expansion an audition. For acoustic or electric pop, rock, folk, blues or singer‑songwriter — and, yes, Americana — styles, this is exactly the kind of bass sound and bass performance that will just work. Solid, subtle, smooth and yet characterful, Americana EBX is quietly, flexibly and dependably brilliant.

It might say Americana on the box, but this is a very versatile addition to the EZbass expansion series that is mix‑ready for almost any mainstream musical style.