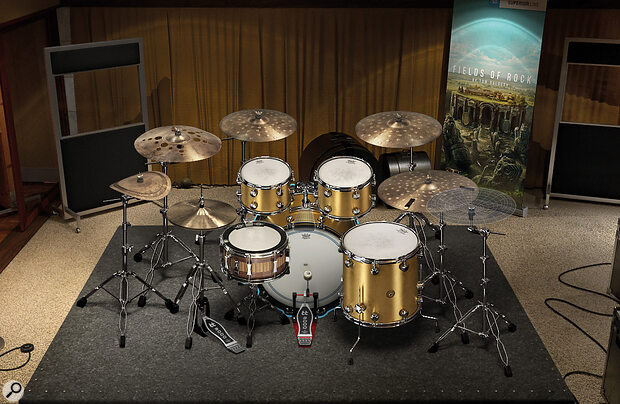 For their latest SD3 expansion, Toontrack made a pilgrimage to the hallowed ground of Rockfield Studios in Wales.

In 1965 Rockfield became the world’s first residential studio, and it has witnessed the birth of some of the most iconic recordings of the last 50 years, by bands ranging from Queen, Motörhead and Black Sabbath to Oasis and Coldplay. Housed within a working livestock farm, the studio comprises two rooms: the Coachhouse and the Quadrangle. Both of them were used to record the three drum libraries and additional percussion library that make up the Fields Of Rock SDX.

The Coachhouse is based around a Neve 8128 inline desk, with outboard including Neve 1060 microphone amps. Its heavily draped recording area provides the location for the ‘Dry Room’ library. Kits were also set up in front of the exposed stone wall for the more lively ‘Stone Room’ library. The ‘Live Room’ library was recorded in the Quadrangle (in which Queen’s Bohemian Rhapsody was also recorded), which features an MCI 500‑series inline desk and has hardwood flooring and more reflective surfaces, providing a contrasting ambience to the Coachhouse.

No Silence In The Library

The Dry Room library features three kits: two 1970s Ludwigs and a Hayman Vibrasonic from the 1960s. The kits used in the SDX libraries often have a story to tell, and in this instance drummer Mat Hector used both Ludwig kits during his time with Iggy Pop. The Ludwig 400 Supraphonic snare that features in this library is an all‑time classic that has probably provided the backbeat for more classic songs than any other drum.

The Hayman kit is heavily damped and can be routed through a series of outboard guitar effects that enables it to live up to its nickname, the ‘Evil Disco Kit’. All three kits offer a deep and warm tone and a definite ’70s vibe — but with plenty of attack — which is complemented by a range of dark Istanbul cymbals. 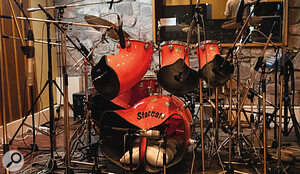 ‘Futuristic’ — a Staccato kit with fibreglass shells.The Live Room library features a single kit from the British Drum Company, dubbed the Stormtrooper on account of its bright white finish. The ambient room mics allow for a big, open drum sound which, although the kit was built in 2020, lends itself to the late‑’80s/early‑’90s arena rock sound. It’s partnered with large, bright cymbals and a Van Kleef cast‑bronze snare drum that suit the kit perfectly.

The Stone Room library goes from the sublime to the ridiculous with its selection of kits. At the ‘normal’ end of the spectrum is a Ludwig classic oak kit, which has a modern sound that will fit into almost any style of music. Like the Stormtrooper, this kit was also built in 2020 but offers a warm, vintage sound that is in keeping with the library as a whole.

Moving a little further leftfield is the 1980s Sonor Sonorlite, a beast of a kit featuring seven deep birch ‘power’ toms. Nicknamed the ‘Pure Goth’, this kit channels 1980s darker rock acts, such as the Cure and Siouxsie & the Banshees, and allows for huge drum fills and inventive patterns to be played across all those toms.

Last up is the ‘Futuristic’, a 1980s Staccato kit with fibreglass shells. If you’ve ever seen one of these kits, you won’t have forgotten it! The single‑head concert toms flare out in dramatic fashion and the bass drums look like a pair of shorts for an elephant. Fibreglass shells and single‑head toms give a very punchy and focused sound, reminiscent of classic ’80s Phil Collins. Gate the ambience mics and you could almost create ‘that’ drum fill. 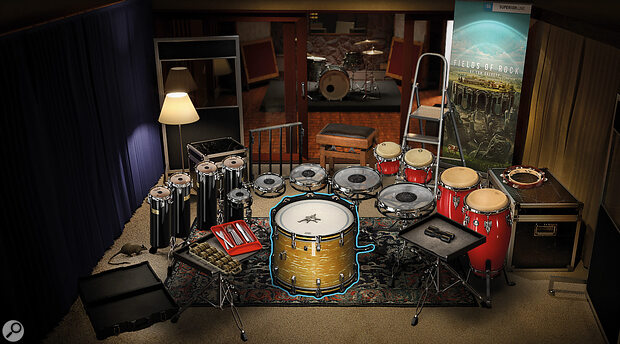 The Junkyard Percussion section includes a number of things not previously recognised as musical instruments. The step ladder, for example...

Finally, we come to the percussion library. In addition to the selection of congas, bongos, tambourines and shakers that you might expect, Toontrack have included a set of Rototoms and Octobans, which also featured in the exceptional Rooms Of Hansa SDX. But it doesn’t end there. ‘The Junkyard’ includes a whole range of intriguing Foley pieces that have been hit, dropped and shaken in various ways, to create a very interesting set of sounds. You’d be amazed by the sort of rhythms and grooves you can create from some window railings, a cutlery drawer and a step ladder (single‑rung hits, glissando up and down the steps, and kicked across the floor... obviously!).

A little like the studio in which it was created, this is a highly practical and functional library with a lot of character and a definite whiff of history about it.

As with all Superior Drummer libraries, microphone placement plays a big part in creating the overall drum sound. The Fields Of Rock SDX is no exception, with the close‑miked drums augmented by a range of mono and stereo ambient mics to add the room acoustics. To capture the unique sound of the Coachhouse, the Stone Room library includes a Shure SM57 placed in the corridor between the two studios for an additional ambience that, when mixed with the whole kit, is particularly apparent on the snare. The unique Rockfield reverb chamber is also featured in this library, as well as a mono microphone routed through a selection of outboard guitar effects pedals to add a ‘trash’ quality.

In addition to the ‘raw’, unaffected kits, Toontrack provide a number of presets created by Tom Dalgety and Toontrack themselves. These feature unique combinations of drums and processing that open up a wealth of creative techniques and options to explore.

A selection of MIDI grooves, played by Mat Hector, is also included. Divided into sections that relate directly to each library, the grooves offer a broad insight into how Tom Dalgety sees the kits being used. For example, the grooves suggested for the Stone Room’s Pure Goth kit have a definite air of Budgie from the Banshees about them.

There are verse, chorus, bridge and fill grooves that cover a multitude of styles and feels. Of course, you can use these or any Superior Drummer 3 grooves with any kit from any library, to create the perfect drum track, and further edit any element of it using the grid editor within SD3.

Field Of Rock’s three contrasting spaces and range of kits give a wide and varied sound palette, which, although well suited to ’70s and ’80s rock, also fit very well into more modern genres. The percussion is a fantastic addition to the drum libraries and is extremely usable.

If you need help to decide whether this library is for you, the Toontrack website provides the most comprehensive detail you could wish for, with every aspect of the equipment, rooms and recording process covered in incredible detail. In fact, it makes a very entertaining and informative read in its own right!

This is not a library of extremes — there are no huge spaces or complex surround mic techniques to contend with. A little like the studio in which it was created, this is a highly practical and functional library with a lot of character and a definite whiff of history about it.

The Fields of Rock SDX offers a fantastic range of kits that capture the essence of 70s and 80s rock with a contemporary edge.