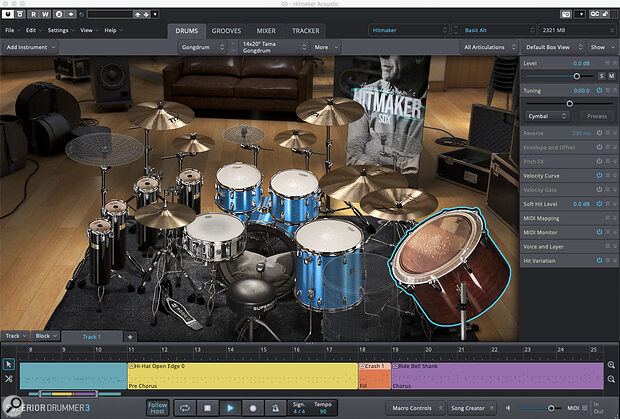 Toontrack and Hugh Padgham bring the drum sounds that defined the 1980s to Superior Drummer 3.

If the iconic tom fill halfway through Phil Collins’ 1981 hit ‘In The Air Tonight’ doesn’t give you chills every time you hear it, then please check your pulse. While Collins undoubtedly worked magic with the sticks, the sonics of that memorable drum recording — with its understated electronic elements, unforgettable tom sound and massive snare with gated reverb — was very much a Hugh Padgham design. Indeed, with production and engineering credits that include an all‑star list of 1980s and 1990s musical greats, he created an approach to drum recording and mixing that influenced a whole generation of hit records and can be heard even to this day.

Now, with Toontrack and Hugh Padgham collaborating on the latest SDX for Superior Drummer 3 — simply titled Hitmaker — you can bring the same approach, and the same epic sounds, to your own recordings. Combining a collection of period‑accurate acoustic drum kits, a goodly crop of classic drum machines, the undeniably magnificent equipment and recording space of British Grove Studios (based in London and owned by Mark Knopfler), and Padgham’s recording and engineering expertise (oh, and a Ball & Biscuit; read on...), the Hitmaker SDX is a mouthwatering prospect. So, is it a hit?

Hugh Padgham’s history of hit making is seriously impressive. His production, engineering and mixing credits include artists such as Genesis, Peter Gabriel, Phil Collins, the Police, Sting, XTC, Paul McCartney, the Human League, David Bowie and Kate Bush amongst many others. For the Hitmaker SDX, Toontrack and Padgham focused on his work with four particular drummers; Phil Collins, Vinnie Colaiuta (Joni Mitchell, Frank Zappa, Sting and others), Manu Katché (Peter Gabriel, Sting, Jeff Beck and others) and Stewart Copeland. These drumming targets strongly influenced the selection of acoustic drum kits used for sampling.

A great deal of effort seems to have been expended in sourcing the specific kits so that they were as close in both brand, model and era to those used in some of Hugh’s iconic recordings. So, for example, a Premier Elite Concert kit — with a suitably good selection of tom sizes and a smaller 20‑inch kick drum — was acquired to accurately reflect the kit used by Phil Collins for ‘In The Air Tonight’. A Yamaha 11000 Maple Custom kit from the early ’90s was used to capture the sound of Vinnie Colaiuta’s drums used on Sting’s Ten Summoner’s Tales album. The same model of Tama Imperialstar kit — including a set of octobans — from the ’70s used by Stewart Copeland in Montserrat’s AIR Studios for the Synchronicity album (including the classic ‘Every Breath You Take’) was also sourced.

These, alongside three equally impressive Yamaha kits from the 1980s and ’90s (and also linked to specific projects from Padgham’s recording CV), and some further kick and snare options, were meticulously recorded in British Grove Studios’ impressive live room using both digital and analogue platforms. Alongside close miking, an impressive array of Neumann microphones was also used in the room and configured to provide both conventional stereo room ambience and a range of surround‑sound possibilities. The user can choose whether to install the samples for the various surround‑based microphones or not (they make up nearly 60GB of the 95GB of sample data) depending upon their needs. A further microphone was the aforementioned STC 4021 Ball & Biscuit (so called because that’s pretty much what it looks like). This was originally used as a talkback microphone suspended from the ceiling in Townhouse Studios’ live room when Phil Collins was tracking drums for a Peter Gabriel solo album but, as discovered by happy accident, with a great dollop of compression it provides a very distinctive and characterful room sound that can be blended with the more conventional drum sounds. This is also available as a channel option within SD3’s Mixer.

Without exception, the acoustic kits sound absolutely fabulous, and across the six kits, you also get a lot of flexibility. Whether it’s the massive gated snare found in some of the Centre Stage (Premier Elite) presets, the control offered by the Dry preset for the Storyteller (Yamaha 11000) kit, or the high snare crack of the Stewart Copeland‑inspired Reggae Rock presets, sonically, the Hitmaker SDX oozes class, quality and, when required, some room‑based grit for added attitude. 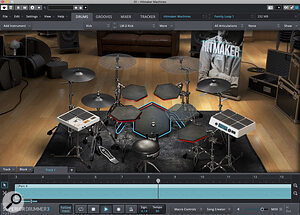 It’s great to see some classic drum machine sounds available within SD3.Padgham was also among the pioneers in combining electronic drum sounds with acoustic drums, creating a hybrid of the two. The SDX reflects that approach with a second sound library built from an impressive list of hardware drum machines. Sources here include the Roland CR‑78, TR‑707, TR‑727, TR‑808 and TR‑909, LinnDrum, Oberheim DX, E‑mu SP‑1200, two Wendel Jr units and the Simmons SDS‑V and Clap Trap. Padgham’s original approach of feeding their output into speakers within the drum recording room to add life and character to the sounds is replicated here, allowing you to blend in the room vibe via SD3’s Mixer.

It’s worth noting that, a couple of EZdrummer expansions aside, Toontrack have never ventured too far into the world of electronic drums before now. While their inclusion here is an essential element of emulating Hugh Padgham’s approach to drum production, it’s also great to see these sorts of sounds now available directly within the SD3 workflow. I do wonder if, at some stage, we might see a dedicated ‘Best Of The Best’ electronic drum SDX or EZX, but the electronic offerings included here might be all the encouragement some users need to explore the Hitmaker SDX, regardless of the (excellent) acoustic sounds.

As ever with SDX and EZX releases, the included MIDI grooves are an integral (and, for non‑drummers, important) part of the package. Given the dual acoustic/electronic nature of the sounds, the groove library includes patterns for both sets of samples.

Interestingly, the song‑based folders feature names that hint very clearly at the original songs that they are inspired by. For example, there are no prizes for guessing what a suitable combination of the ‘Airy’ presets and grooves delivers (yes, including some epic tom fills), or what the ‘Every King’s Breath’ or ‘Synchronous’ groove folders might supply with the Tama kit. Interestingly, for some of named folders, there are complementary patterns for both the acoustic drums and electronic drums (and Airy is one of these). Pick suitable acoustic and electronic presets for separate instances of SD3, layer what are obviously related MIDI patterns, and see just how scarily close you can get to both the sound and performance style of some of these very recognisable mega‑hits.

Whether acoustic, electronic or a blend of the two, Hitmaker makes it possible to add the iconic drum sounds that characterised so many hit recordings from the ’80s and ’90s to your own productions.

That said, there is a tremendous amount of creative potential in simply experimenting with contrasting patterns between an acoustic and electronic layer and seeing what happens. Equally, playing the same patterns with layered acoustic and electronic presets is hugely satisfying, allowing you to easily blend the electronic kick/snare with their acoustic counterparts to provide some tremendously impressive results. It’s also sonically flexible. Used dry, the acoustic (or indeed, the electronic) kits would work in almost any musical style but, if you want the processing options — gated snare and gritty room ambience included — then it’s all at your fingertips.

It’s difficult to be anything but seriously impressed by Hitmaker SDX. The sounds are undeniably excellent, and the selection of presets makes it easy to apply all the necessary effects and room ambience options that characterised Hugh Padgham’s approach. Whether acoustic, electronic or a blend of the two, Hitmaker makes it possible to add the iconic drum sounds that characterised so many hit recordings from the ’80s and ’90s to your own productions. No, it won’t necessarily guarantee you a hit song, but you will be able to get the sound, whatever constraints in space or equipment your own recording space might apply when it comes to actual drum recording. The Hitmaker SDX is a sure‑fire hit for Toontrack — just brilliant.

Toontrack and Hugh Padgham have absolutely nailed it with the Hitmaker SDX. The iconic blend of acoustic and electronic drums featured on so many hit records is now readily available in your own studio.