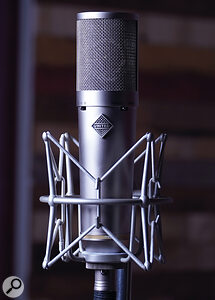 I reviewed UST’s debut microphone in late 2020 and was impressed by how they had accurately captured the sound of the Neumann U47 FET — to the point where I was very happy to recommend it as a direct, cheaper alternative to the original. Their latest release attempts to do the same with another Neumann model, but adds an interesting twist that offers a solution to a classic audio Internet forum debate.

The Neumann U87 needs little introduction, having been a mainstay in studios since the late 1960s. Known for being a high‑quality, reliable studio workhorse, the mic was revised in 1984 as Neumann attempted to improve certain aspects of the design. Many engineers claim the newer ‘Ai’ version has a brighter, less pleasing tonal character than the older ‘vintage’ model. Despite the differences between the versions, both are excellent and very popular studio microphones, and with their Twin87, UST are claiming to offer the sound of both in the same microphone.

One of the key differences between the original U87 and and the newer U87 Ai relates to the capsule and how it was polarised. When the U87 was first introduced, Neumann had to modify the K67 capsule, originally developed for the classic U67 valve mic, to run on 48V phantom power. The new capsule was designated the K87. However, when Neumann decided to revise the U87 in the mid‑1980s, a DC‑to‑DC converter was added, and this allowed Neumann to revert to the original K67 capsule. The now‑redundant battery compartment was removed and Neumann also raised the polarisation voltage to 60V, delivering a 3dB improvement in signal‑to‑noise ratio, as well as a hotter output. It’s perhaps not a great surprise that these changes produced a slightly different‑sounding microphone, and many claim that the newer model is brittle and harsh compared to the original. Certainly, non‑Ai versions fetch more on the used market.

What’s In The Box

The UST Twin87 comes in a stiff foam‑lined cardboard box, and includes a slightly disappointing sleeve‑type case of the type you would typically use to store a cheap dynamic mic. I can appreciate the tough decisions that have to be made to bring a quality‑sounding mic in at a certain price point, but I would happily pay a little more for a proper case to store the mic in. The mic itself looks solid and professional, and the cradle that is included is of a better quality than other mics I have reviewed around this price range.

Another impressive distinction compared with similarly priced mics I’ve looked at is that all the key components of the Twin87 were developed by UST themselves, without any outsourcing. The capsule is a custom‑made, gold‑spluttered, dual‑diaphragm K87‑style capsule, while the US‑made output transformer was developed specifically for this mic, with much more ‘metal mass’ than would typically be found in a mic of this style. All other components could be described as ‘high end’, and the price appears to be very competitive for a mic conceived in such a boutique style.

All the features you might expect of a U87‑style mic are present on the Twin87, so you have a choice of three polar patterns, a ‑10dB pad and a high‑pass filter. The filter is specified as being 12dB down at 80Hz, and with a “gradual” slope. This suggests a high turnover frequency tailored to compensate for proximity effect, much like the filter on the U87 and Ai.

The UST in its vintage setting sounded very close indeed to my own 1971 U87, which explains why I immediately felt confident using it on vocal sessions...

The key selling point of the Twin87 is its ability to replicate both incarnations of the U87. The switch that chooses between them changes the way the mic’s electronics interact with the capsule, remaining faithful to the different originals. In Vintage mode, the Twin87’s circuitry polarises the capsule directly using phantom power, as on the early U87, whilst in Modern mode the capsule is polarised at a higher voltage, using a FET oscillator circuit as found on the U87 Ai.

There are a couple of additional features that might be of interest to U87 aficionados, the most significant being the addition, as standard, of an apparently common modification (though one that I personally wasn’t aware of). When the Twin87 is set to cardioid, the mic mimics the ‘true cardioid mod’ that some U87 owners choose to get done. This takes the rear diaphragm of the capsule out of circuit, apparently yielding a purer cardioid polar pattern and better signal‑to‑noise ratio. If that’s not enough for you, you can also go down the rabbit hole of engaging or disengaging the output filter that was added at some point in the U87’s career to remove RF and EM interference, and which some people think has an audible effect on the sound,. The Twin87 ships with the filter disengaged, but it can be activated by a fairly accessible DIP switch inside the mic. While I wasn’t prepared to go down this route myself, it might be a fun experiment if you purchase the mic, and be a useful feature if you are in a working environment that is prone to electrical interference.

The Twin87 arrived during quite a varied and busy period at my studio, and it struck me as I started writing this review just how much I ended up using it. It was one of a couple of mics that stayed on its stand throughout a busy few weeks, and without me giving it much thought, it ended up filling the role of studio all‑rounder with ease. Its jobs included lead and backing vocals, a drum room mic, acoustic guitar, podcasting, and an ADR session for a short film. On listening a bit more forensically once I had some downtime, the UST in its Vintage setting sounded very close indeed to my own 1971 U87, which explains why I immediately felt confident using it on vocals, and why I also didn’t particularly like how the forward midrange sounded in front of a drum kit in my live room. Switching between the two settings, the Modern option clearly sounded a little brighter, drawing your ears more towards the higher end of a voice or instrument whilst sounding a tiny bit leaner in the low mids. This isn’t a ‘night and day’ difference, but provided a nice option for tailoring the mic to a source. I tended to prefer the Vintage setting on voice work, but liked being able to introduce a bit more high‑end detail on guitars and other other acoustic recordings. It never felt like I was swapping out the mic for a different one, just introducing a subtle change in character.

It was only after using the mic that I checked to see how much it was selling for. I was quite surprised when I saw the figure as I was expecting it to be around the £1000 mark, based on my experience. I was immediately happy using it in place of and alongside my own vintage U87, and found the ability to quickly change settings to introduce a bit more top end to be very useful, and more than just a novelty feature. There are a couple of good options now for a U87‑style mic around this price range, but the Twin87 should definitely be near the top of your shortlist.

The UST Twin87 offers users a clever way of combining the sound of both versions of a studio classic in a single, affordable microphone.