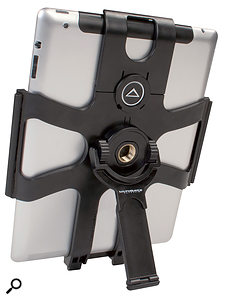 The Ultimate Support HyperPad. The topmost section can be removed to allow you to insert your iPad.

Apple's iPad seems to have wormed its way into both live and recorded music in a big way, so having some way to hold the thing securely in the right position is a must. The problem is that the right position varies depending on the task in hand, which is why Ultimate Support have developed the Hyperpad. Designed for all full-size iPads, the HyperPad offers five different mounting configurations that should cover the vast majority of situations. This is achieved by the provision of different mounting attachments that can be fixed to the plastic frame that holds the iPad. The package comes with a short gooseneck (5/8-inch thread) that can screw directly onto a mic stand or onto the included desktop clamp (0.5 to 1.6 inches desktop thickness), and also with a fitting that clamps to the tube of a mic stand with a diameter from 0.8 to 1.25 inches. Additionally, a fold-out support on the back of the stand allows for 'photo frame'-style desktop display without requiring any of the additional fittings. This can be rotated for either portrait or landscape operation. 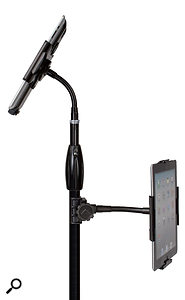 Make your own iPad tree: The HyperPad can be attached to a mic stand in several different way. Although, with the exception of the threaded mountings and tightening screws, the device is almost entirely made from heavy-duty plastic, it is extremely tough and very cleverly designed. Your iPad will have to be removed from any third-party case you may have put it in, and to mount the iPad, a section of the stand is removed and then clicked back into place once the iPad is installed. There's an aperture to allow the connector to pass through unimpeded, and even a couple of tiny swivel rubber feet to add stability when using the portrait free-standing mode. While the typical street price of around £60$70 may initially seem a bit steep, once you examine the build quality and design ingenuity of the system, it actually seems like very good value.

Both the table clamp and mic-stand clamps are very substantial. The mic-stand mount can screw directly to the back of the iPad mount or be connected via the included short gooseneck for angled use. Goosenecks are notorious for not staying where you put them, but this one is reassuringly stiff. In fact, I'd say the only trick the designers have missed is in restricting the pole clamp travel so that it won't go wide enough to fix to speaker poles, as I feel that would have been a useful option in some situations, especially at cramped pub venues. The desk clip will fit a speaker pole and is reasonably secure, but as it has flat sides it doesn't grip as well as the proper pole mount.

Overall, then, Ultimate Support have it pretty much covered, and in a thoroughly professional way. In live performance, iPads get used for anything from lyric sheets and set list reminders to mixer control surfaces, while in the studio they are seeing more use as DAW controllers or even as the main recording system, so a reliable mounting system is a must.