A hand‑wired valve guitar amp at this price seems too good to be true for the recording guitarist — so can VHT make it all stack up? 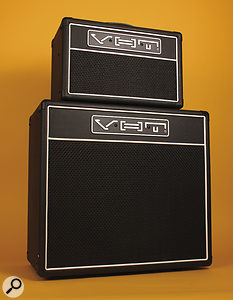 One of the most worthwhile purchases I've made in recent years is an old Fender Vibrochamp valve amplifier. With a feeble 6W output running through a single eight‑inch speaker, it struggles to keep up at band practices; but as a recording amp, it punches well above its (very modest) weight. This, of course, is no secret, and canny guitarists have always made good use of small Fender amps like the Champ and Princeton in the studio.

In recent years, the idea of a compact, affordable recording amp that prioritises basic sound quality rather than versatility has really taken off, and as well as innumerable boutique models, all the major manufacturers now offer their own takes on the concept. Some are great, some less so, but as far as affordability goes, the old adage applies: you get what you pay for. So if you want a valve amp for £100, you can have one, but the chances are you'll be getting something that is basically disposable, with PCB construction, a cheap and nasty speaker, and a cabinet made from something resembling congealed sawdust.

Which is why VHT's Special 6 has been making waves. It's priced like a budget amp, but the specifications read like those of a boutique model. Available either as a 1x10 open‑back combo or a separate head with matching 1x12 closed‑back cabinet, it's fully hand‑wired, with no PCBs in sight. We're promised a high‑quality speaker, and although the head and combo are built of MDF, the 1x12 cabinet is made, in time‑honoured and labour‑intensive fashion, from finger‑jointed Baltic ply. It all sounds a bit too good to be true. 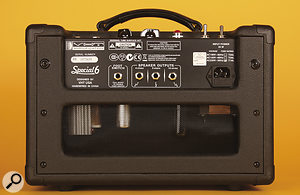 Unusually for a head of this size or price, the Special 6 offers outputs for speakers of three standard impedances.

There is a fair bit in common between the Special 6 and some of the Fender amps that have borne the Champ designation. Like the Champs, the Special 6 is a single‑ended design that uses a single ECC83 (or 12AX7 if you prefer) preamp valve and a 6V6 output valve, although its rectifier is solid‑state. The only EQ control is a simple Tone knob, but the Special 6 is more flexible in this regard than initially meets the eye. The amplifier's default voicing is set by a fixed 'tone stack', but the resistors making up this circuit can be removed from the signal path by pulling the Volume control out, effectively re‑voicing the preamp stage and increasing the gain. The Tone knob remains operational in both modes, and the pull boost can be controlled using the supplied footswitch, if you prefer.

Both the head and the combo feature a multi‑tap output transformer that is capable of driving either a 4Ω, 8Ω or 16Ω load; VHT's own speakers are 16Ω models. A three‑way switch puts the Special 6 in and out of Standby mode, and also provides a 'Low Power' mode in which the output valve is operated in triode rather than pentode configuration.

UK distributors Dawsons were kind enough to send both the combo and the head/cab for review; another option is an open‑back 1x12 cabinet with a Celestion G12H30 speaker, but this wasn't available. What impressed me first of all was the build quality, which would not be out of place on a much more expensive amp. Everything feels solid, the finish is of a very high quality, and although the VHT logo is arguably a bit on the large side, the overall look is jolly smart. The only minor weakness I could detect was a slightly wobbly grille on the back panel of the combo.

The basic tone of the Special 6 is very impressive indeed: less raw than my Vibrochamp, with a smoother, more 'scooped' clean sound that is perhaps closer to what you'd expect from one of Fender's larger amps. Pull the Volume pot to defeat the fixed tone stack, and this gives way to a louder, more distorted, snarly sound with a lot more mid‑frequencies. I've seen this described as moving from a 'blackface' to a 'tweed' Fender sound, and as long as you don't expect a perfect replica of a '50s Champ, there's some merit to that description. Low Power mode is perhaps a little disappointing by comparison, but still capable of yielding usable sounds.

Single‑ended amps are inherently more susceptible to noise and hum than push‑pull designs, and the Special 6 combo divided opinion in the SOS office on this front. Hum is certainly noticeable at higher volumes, especially in the pull boost mode, although the Special 6 combo is actually a little less noisy than the other single‑ended amps I own — the Vibrochamp and an EL84‑based English Valve Amps TMB. Most of us felt we could live with it, but if you're used to your amps being absolutely silent, it's something to be aware of, especially if you like to keep the amp itself wide open and roll back the volume on the guitar.

One of the strange qualities of the Champ is that when you crank everything to the point where the cabinet is shaking and the speaker distorting, the sound still somehow holds together. The same can't be said of the Special 6 combo: beyond about three‑quarters up the Volume dial, it begins to sound like a soggy cardboard box. If you want a properly distorted tone from this amp you'll need to use either the Low Power mode or a pedal, or both. For clean and on‑the‑edge sounds, however, it's very fine. 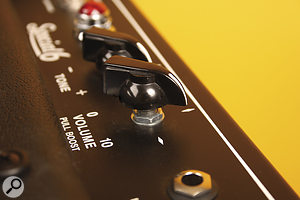 Pulling the volume control out both boosts the signal and changes the voicing of the preamp stage.

With its 10‑inch speaker and more 'scooped' tonality, the Special 6 combo already sounds like a bigger amp than my Vibrochamp, although in physical terms it's not that much larger. The closed‑back, 1x12 cabinet takes this to another level. Not only is it quite a bit louder, to the point where it could probably keep up with many drummers (and irritate many neighbours), but you can turn the volume up full and let rip, and it still sounds great. There are few of the unwanted rattles and buzzing noises you sometimes get with cheap cabinets, and no sign of the unpleasant, middly honking that began to dominate when the combo was turned up too far. Nor does VHT's speaker design show any of the obvious faults that can plague cheap, no‑name models.

The hum seems more prominent through the closed‑back cabinet than it is with the combo, and again, I wasn't very taken with the way it sounded in Low Power mode: there was an unpleasant rasping edge to the break‑up, which might be down to the particular valve that was installed. But all in all, the head/cab combo sounds bigger, better and more expensive than it has any right to. It's not a high‑gain amp and never will be, but it will give you polished clean tones and snarling break‑up that can rival much pricier amps. In tandem with the pull boost, the single Tone control delivered more than enough tonal variation for the guitars I tried, and if it doesn't suit you as 'stock', there's plenty of scope for modification (see 'Mods For Rockers' box).

No matter how many sums I do in my head, I find it hard to comprehend how VHT are able to bring this product to market at such a low price (and the 'street' price is lower still). If it wasn't for its gorgeous valve tremolo, my Vibrochamp would find itself on eBay right now. The Special 6 really is an obscenely good buy, and worthy though the combo is, at this price I really can't see any reason not to get the head and cabinet. Bargain.

I'm not aware of any other hand‑wired tube amps that are available new at such a ridiculously affordable price, but there are certainly PCB‑based alternatives, including Fender's Champion 600, Epiphone's Valve Junior and Marshall's Class 5. There are also UK‑based companies who will hand‑build amps to a very similar design, but it'll cost you. For instance, English Valve Amps' TMB head is perhaps the most affordable UK‑made alternative and can be ordered with a 6V6 output valve, but still comes in at over £400. Even if you build a Champ clone yourself, using kits from the likes of Torres or Weber, it'll still cost more than the Special 6! 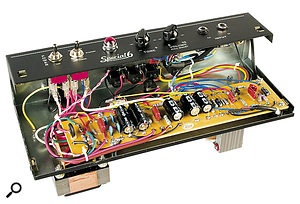 The Special 6 electronics comprise full‑sized, hand‑wired components — which makes it the ideal candidate for modding!I've read that when car‑makers Peugeot discovered that their 206 was the hatchback of choice for people to decorate with go‑faster stripes, low‑profile tyres, bucket seats and twin exhausts, they worked hard to make subsequent models even more mod‑friendly, knowing that this would help drive sales. That may be an urban myth, but it's not only boy racers who like to tinker, and the same philosophy has certainly driven the design of the Special 6. So, instead of using PCBs, VHT chose to employ full‑size components hand‑wired to an 'eyelet‑style' board, and they also make the Special 6's schematic freely available. This means that, for example, anyone who wants to change the voicing of the preamp stage can easily substitute different resistors into the tone stack. It's also apparently pretty straightforward to use different output tubes in place of the stock 6V6, while the Web is awash with enthusiasts who have made more ambitious changes to the basic circuit. VHT haven't made electricity any less deadly, of course, so the usual caveats about tinkering with tube amps apply.

VHT's Special 6 is, well, special. At a price that makes it almost an impulse buy, it offers remarkable build quality and sound quality.