Waldorf build on the success of their Blofeld synth by adding not only a keyboard, but also sample RAM. 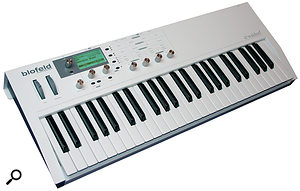 Last year German wunderkinds Waldorf returned from the wilderness bearing a compact and stylish white module. With its blend of wavetable synthesis and analogue modelling, the Blofeld was a little cracker, so the announcement of a keyboard version hot on its heels was no surprise. What did raise an eyebrow or two, however, was the news that this model possessed onboard sample RAM, widening the scope of an already versatile synth engine.

For the lowdown on the Blofeld's internal spec, please revisit our review from June 2008. I'm happy to report that externally the Blofeld Keyboard is constructed solidly — indeed, at 8kg this is a substantial chunk of pearly‑white metal. Other than the single pair of stereo outs and lack of a MIDI Thru, you don't find the cost‑cutting measures typically associated with keyboards in this price range. The keyboard action is good and it has aftertouch — top marks there! And as the power supply is internal, I can (almost) overlook the fact that the included power lead was a European one.

Unlike its desktop sibling, the Blofeld Keyboard has a MIDI Out port and an input for a sustain pedal.The Blofeld Keyboard's user interface adopts the minimalistic approach of its sibling, leaving ample space on its surface for a Blofeld module, should you own both. Thankfully, Waldorf have included a MIDI Out this time, as well as two control wheels and a sustain pedal input. The remaining 'extras' consist of three plastic buttons, two of which transpose the keyboard beyond its range of four physical octaves. The third button is labelled 'Free', its role selected from a (short) list of possibilities including mute, sustain and latched sustain. Choosing the last for latching drones and arpeggios is far nicer than jamming knives into the keyboard, or riding the sustain pedal. Sadly, none of these buttons offer any visual indication that they have been pressed.

We saw in the previous review that the Blofeld's flexible architecture offers multiple flavours for the budding sound designer. All three of its oscillators provide full‑bodied analogue waveforms, while oscillators one and two offer a tangy wavetable synthesis implementation. The Blofeld Keyboard shares this architecture but adds a new element to the first two oscillators: sampled waveforms. These samples are housed in 60MB of onboard flash RAM but, frustratingly, at the time of writing, there is no way to import user waves.

So what samples are pre‑loaded to whet our appetites? Well, there are 41 waves in total, including piano, zither, marimba, guitar, organ, strings, some sound effects and a selection of percussion hits. There are one or two goodies — the choir and flute spring to mind — but I doubt I'd keep many of them once the wave manager software has been released.

Layering sampled strings, drums or effects with wavetables and analogue waveforms is both addictive and fruitful — it's interesting to note how even fairly ordinary samples acquire markedly different personalities courtesy of the Blofeld's filters and modelled drive circuits. However, I suspect what we hear in the current factory set represents only the start of a whole new Waldorf adventure.

If owners of the Blofeld module are feeling a little left out by this talk of sample playback, all Blofeld models do already contain the sample RAM, but module users will have to pay for a software upgrade, at a cost of 99 Euros, to be able to access it.

At the end of January this year, a Blofeld upgrade including a multitimbral mode was finally handed over to an eager community of Waldorf users. Unfortunately it wasn't entirely bug‑free. One particular bug broke the handling of external MIDI clock and, although a fix should be available by the time you read this, it's a pity it leaked through: it took the shine off an otherwise comprehensive upgrade.

There are now 128 multi setups, each with up to 16 parts. In common with the previous implementation, the 'Effect 2' setting of the first part — typically reverb or delay — is shared by all. Of the other parts, only the first four maintain their 'Effect 1' (chorus, flange, etc) which, on a synth with just 25 notes of polyphony, isn't a bad compromise.

Selecting a part to edit is a two‑handed affair involving the play button and adjacent main encoder. You can then scroll through a series of screens setting MIDI channel, transpose, detune and so on, or defining velocity and key zones. There's even a graphical overview of all the parts' levels and panning, and the end result is a clear and well‑designed system. My only moan was the ease with which you can inadvertently lose edits-in-progress by the simple action of switching to another multi or into single mode. One slip and all tweaks to the multi, or to individual patches in that multi, are lost.

Finally, multis don't keep copies of the patches they point to — but with over 1000 patch locations on board you could probably reserve a bank or two specifically for multi use.

I sincerely hope this trend of merging different synthesis types continues because it's leading to some genuinely innovative, powerful hardware instruments. With its mixture of sample playback and synthesis, I've heard the Blofeld Keyboard compared with the more expensive Nord Wave — but until the Blofeld's sample RAM is open to full exploitation, it's probably too early to draw any final conclusions. The Blofelds are, however, aimed towards those who appreciate complex synthesis, admittedly at the expense of a direct, knobby interface. It'll be interesting to see how many samples can be crammed into that precious 60MB and I'm glad that purchasers of the module can upgrade their machines to the same spec — imagine the gnashing of teeth on on‑line forums otherwise!

The inclusion of a proper multitimbral mode should be appreciated by all, whether for creating keyboard layers and splits or for sequencer work. Multitimbral use inevitably means a greater strain on the available resources, which can sometimes lead to unpleasant clicks and crackles. However, Waldorf are aware of this, so fingers crossed for quieter voice‑stealing in a future OS.

To sum up, the Blofeld is a deep and splendid instrument that goes where no Waldorf synth has gone before. For not a great deal of money, it can serve up a host of analogue and digital synth tones, speaker‑shredding industrial sound effects and even 'normal' keyboard sounds — all in a neat, portable package.

Finding alternatives to either Blofeld model is no stroll in the park. Synths such as Roland's Juno G combine ROM and user samples with synthesis but are essentially aimed at realistic sound production. You need to look higher up the food chain — at instruments like the Nord Wave or Roland V‑Synth — before you encounter anything broadly similar, and neither of those have proper multitimbrality.

Forgetting the sample RAM angle for a moment opens up options such as the Korg Radias or the Access Virus TI Snow. Both have impressive synthy credentials but, again, for way more wonga than a Waldorf.

The Blofeld module marked an important new chapter in the Waldorf story, and the keyboard version builds solidly on that foundation. Bringing samples to an already packed party sees the Blofeld attain new heights of wonderfulness. While we clamour for the release of a utility to open up the sample RAM, we can at least be content to experiment, to program and to play.