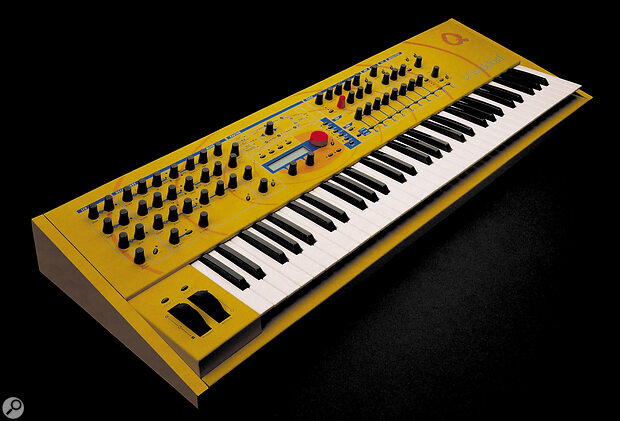 Waldorf's long‑awaited Q synthesizer is now shipping, but without many of the features it will ultimately possess. Gordon Reid takes a hands‑on look at what's here now and what's to come.

Sometimes the keyboard world is boring... lots of repackaged products rehashing stale ideas, with just a dash of this or a sprinkling of that added to make it seem if something interesting is happening. At other times, you can see the world changing even as you watch — and right now, the world is changing, as physical modelling technology begins to seriously impact on the world of synthesizers. Amongst the recent modelling synths is one that seems to be attracting as much interest as the rest put together — the Waldorf Q.

Before we look at the technology behind and inside the Q, let's state the obvious. It's yellow. It's a five‑octave synth in a superb steel chassis, it has lots of knobs and switches and... it's yellow. Love or hate it, you've got to accept that this is a stroke of marketing genius by Waldorf. Other synths may have a bucket‑full of DSPs and a wider range of physical models, but the Q is the one that everybody will notice. And it'll be no use sticking gaffer tape over the Waldorf name when you're asked to play one on MTV. If you're miming with... oops, I mean 'playing' a Q, everybody will know it.

Underneath the sunny exterior, the Q beats with three hearts. Each is a Motorola 56303 DSP, a chip from the same family that powers many sophisticated digital audio editors. This gives the Q three times the processing power of Waldorf's Microwave II and Microwave XT, and three times the power of competitors such as the Access Virus or Nord Lead 2. Of course, simply throwing power at digital synthesis is no guarantee that it will sound good, but Waldorf are keen to assert that the Q sounds and feels as smooth as a genuine analogue synthesizer. This takes a great deal of DSP power, and that is why the Q has lots of it. (There are digital synths even more powerful than the Q, of which the most notable is probably the Novation Supernova. This boasts more than twice the power of the Q, and you can see this reflected in, for example, the relative complexity of the two instruments' effects structures.)

If, on the outside, the Q looks like the finished item, on the inside it is still very much an instrument under development. Many of the features described in Waldorf's literature are unavailable, and the Q is as yet incomplete enough to make a full review inappropriate. What's more, a full appraisal today would, in all likelihood, not reflect the final configuration of the instrument. Take, for example, the Q's 'analogue' drum section. Early reports suggested that the Q would include a dedicated drum section with the ability to emulate popular analogue machines such as the Roland TR808 and TR909. In recent weeks, Waldorf has shelved the idea in favour of expanding the multitimbrality of the instrument from 4‑part to 16‑part. Similarly, it's still unclear whether the Q's reverb algorithms will ever appear. A senior engineer at Waldorf told me that "a bad reverb is worse than no reverb at all" and that the company will ditch any features that fail to reach its highest expectations. Some may find the potential loss of the reverbs disappointing, but I believe that Waldorf's attitude is to be commended. After all, the designers will find other uses for the released DSP power, and these may be more exciting than a handful of merely average effects algorithms.

I find it amusing that the Q's vast DSP power has just one raison d'être: the recreation of the structures and anomalies of analogue, subtractive synthesisers. In many ways, Korg's Z1 and the Yamaha VL‑series seem to me more justifiable, because they use their power to create sounds that other methods of synthesis find difficult. But there it is... fashion decrees, and manufacturers conform.

The Q is, therefore, a subtractive synth with 16 voices and three analogue‑style oscillators per voice. These oscillators currently offer the four classic waveforms — sawtooth, triangle, sine, and pulse/square — with pulse‑width modulation, frequency modulation, ring modulation, and oscillator sync. Two additional settings are marked ALT1 and ALT2 but, at the time of writing, these are dead, and my discussions with Waldorf's designers have revealed that they have made no decisions regarding their final uses.

If, on the outside, the Q looks like the finished item, on the inside it is still very much an instrument under development. Many of the features described in Waldorf's literature are unavailable, and the Q is as yet incomplete enough to make a full review inappropriate.

The filter structure is probably the most radical part of the Q. In every voice you can 'pan' each of the sources in the Mixer between the Filter 1 and Filter 2 busses, and direct the output of Filter 1 to the Amp, or to the input of Filter 2, or any proportion of each. There are currently 10 filter characteristics that you can allocate to the two filters, and these encompass all the expected 12dB/octave and 24dB/octave types. There are also two Comb filters that will prove particularly useful for programming unusual and powerful sounds. Waldorf has suggested that there may be other filter types in the future but, again, the exact natures of these are undecided.

The envelope section is more orthodox, with four ADSR envelope generators per voice, two of which modulate the filters and amplifiers respectively. Waldorf has promised several enhancements, including different triggering modes and 6‑ or even 8‑step envelopes, but those lie in the future. Similarly, the generous helping of three LFOs offers everything you need to create standard patches, but many more advanced features are yet to be implemented.

At the heart of the Q is a 16 x 16 'modulation matrix' that allows you to direct a selection from 30 modulation sources to a selection from 57 destinations. Some of these sources are available within the edit menus but are, as yet, unimplemented. Similarly, the dual effects sections are at an early stage of development, with just chorus, flanger and delay effects available.

The arpeggiator is nearer completion, and offers the expected range of modes, with enhancements such as variable note lengths, note ordering, and shuffle. There are 15 arpeggiator patterns held permanently in ROM, and you can freely allocate these to each patch. Alternatively, you can create arpeggio patterns on a sound‑by‑sound basis and store these as part of the patch. With 303‑style 'accent' and 'glide' parameters, I predict that the arpeggiator will be the primary reason behind many Q purchases.

In keeping with modern synth architectures, the Q promises 16‑part multitimbrality and 16‑part layers/splits that Waldorf call 'Multis', but neither of these is implemented in the current operating system. Similarly, the 32‑step polyphonic sequencer is a shadow of its promised self. When available, these sections should make full use of the six analogue outputs and the S/PDIF digital output found on the rear panel. However, we shall have to wait to see whether Waldorf adopt a truly multitimbral output structure, or limit the Q to a more basic 'master effects' configuration.

Most players will find the Q's 58 knobs, large data entry dial, and 40 buttons a welcome return to the accessibility of classic analogue synthesizers. However, closer inspection reveals that most knobs have a secondary 'SHIFT' function, and there are several EDIT buttons that lead into typical digital editing systems. In many ways, this is inevitable because the Q's patch structure currently has over 100 parameters per voice, but it's not ideal. Matters would be improved if Waldorf had opted for a large, modern screen, but the 2 x 20‑character LCD is almost a 'vintage' feature in its own right. I'm not suggesting that you need a monitor‑sized touch‑sensitive screen on every synth but, as it is, we're back in the dark ages of abbreviated parameter names and arcane graphics. Yurg!

But this is nit‑picking. My one serious gripe concerns Waldorf's decision to omit a disk drive.I fear that the company has assumed too much overlap between the music and computer worlds, and expects every Q user to have a PC. This is possibly a mistake. Until Waldorf implements the smart‑card slot in the rear of the instrument, you can't even update the operating system without Internet access and a MIDI sequencer in tow. High‑capacity smart cards will eventually be cheap, but I suspect that there may be tears in the interim.

And, finally, what of the sound itself? Well... it's possible that the character of the Q will evolve as the software nears completion, but currently, I would call it 'bright', almost to the point of harshness. This is to some extent a consequence of the very wide frequency response of the oscillators and filters, and the lack of any background hiss and grunge to mask the sound. In fact, I'll stick my neck out and state that the Q is unlike true analogue synthesizers, and has a distinctive character of its own. It may 'feel' analogue because of its plethora of knobs and buttons, its lack of quantisation artefacts, and its self‑oscillating filters, but it doesn't exactly 'sound' analogue. Some players will undoubtedly find this disconcerting, but I hope that many more will take advantage of the opportunity that this represents.

The Shape Of Things To Come

I find it amazing to watch Waldorf actively promoting an instrument as deeply unfinished and amorphous as the Q. What's even more amazing is that players in Europe and the USA are buying it. And what's most amazing is that I don't hear any cries of foul play on the Internet or Waldorf's user group. That the Q has buckets of potential is without doubt, but imagine the furore that would result if Roland, Korg or Yamaha released an instrument that was only 50 percent finished!

All I can conclude from this is that, for some people, 50 percent of a Q is more desirable than 100 percent of a Virus or Supernova. If the finished Q lives up to this sort of promise, it's going to be one hell of a synthesizer.