Waves' latest equaliser can be five different virtual analogue designs at once — and it has some other neat tricks up its sleeve too. 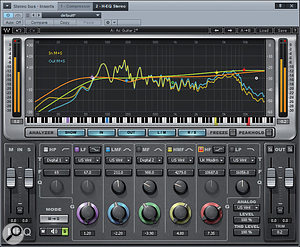 Many software companies, Waves included, make reproductions of classic vintage hardware in plug-in form. Some of these can sound fantastic, but in the software world, the limitations of the original hardware feature sets can grate. In the case of EQs, for example, many vintage designs are not truly parametric, or offer only a limited range of stepped frequencies, or only a few bands, and 'surgical' equalisation to notch out problem resonances is often beyond their capabilities. Waves' H-EQ (Hybrid EQ) is designed to present the best of both worlds, offering the flexibility and power of digital EQ and a variety of analogue 'flavours' that can be mixed to taste. Like all Waves plug-ins, it's authorised to iLok and available on all major native plug-in formats; unlike some of their other recent efforts, it's also offered in TDM format for Pro Tools HD.

H-EQ is certainly well endowed with features. As well as high- and low-pass filters, there are five parametric bands, of which the outer two can be switched to shelving modes. Each band can also be switched individually between seven different EQ algorithms: US Vintage, UK Vintage 1 and 2, US and UK Modern, and Digital 1 and 2. The first five of these are, as the names suggest, modelled on classic and current analogue EQ designs, providing a varied palette of sonic character for 'broad brush' tonal shaping. These behave as the originals, so some don't offer Q control and most won't form very narrow notches. The second Digital mode is intended to offer a purer, more invisible sound, and can operate at very high Q values for corrective notch purposes. Perhaps most interesting and unusual, though, is the Digital 1 mode. When you switch a band to this setting, the Q parameter no longer adjusts bandwidth. Instead, it acts as a kind of 'tilt' control, applying an increasing degree of asymmetry to the bell shape as you push it further left or right.

This asymmetry and all other aspects of the EQ curve are displayed on a large-ish graph above the controls, superimposed on a real-time spectral analyser. (Relatively few 'vintage modelling' EQs show you the actual EQ curve, so this is a boon in my book.) The scale runs to ±30dB, but if you want to see a gentle EQ curve in more detail, you can click and drag to exaggerate the centre section at the expense of the top and bottom. Another interface innovation is the piano keyboard that appears between the controls and the display, allowing you to set the centre frequency of each band by clicking on a musical note. Each band is displayed as a coloured blob that can be dragged around with the mouse; Ctrl-clicking constrains movement to vertical or horizontal, while Alt-dragging adjusts the Q value. The display is very clear and smooth, but the click-and-drag process feels a tiny bit lumpy and slow compared with other EQs I've tested. Another interface oddity is that while Q and gain are adjusted using rotary dials, the frequency of each band is set using Waves' old-style controls, where you click and drag up or down to change the numerical value that's displayed.

Further versatility is endowed by a built-in M/S encoder and decoder and the ability to apply different settings to the two halves of a stereo signal. This means that you can, for instance, EQ the Middle and Sides signals differently, which opens up some useful mastering possibilities.

Finally, the output stage is also worthy of note. The analogue emulations within the bands themselves are limited to copying the transfer characteristics of the equalisers from which they're sourced, and don't mimic other aspects of the hardware, such as noise and distortion. Should you wish to apply these, three controls let you set Analog Type to any of the five analogue EQs modelled, control the Level of noise and hum that they should add, and the amount of THD (total harmonic distortion). This last control runs from zero to 1000 percent, allowing you to wildly exaggerate the non-linearity of the original hardware, should you wish to! 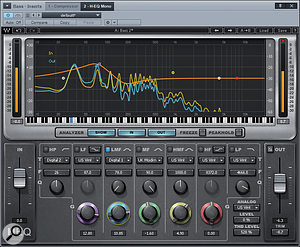 H-EQ's asymmetrical bell curves can be a useful tool. Here, a skewed boost at 80Hz is adding a broad low-frequency lift without troubling the muddy frequencies at 150-300 Hz.

I'm probably not alone in already having at least half a dozen nice EQ plug-ins installed on my music PC. Do these innovations make it worth finding extra space in your plug-in folder for H-EQ? Well, there aren't many other EQs that let you use very different algorithms for different bands, and this opens up quite a lot of flexibility. For example, you can simultaneously apply a Neve-ish bump in the low end and an SSL-like sheen to the high frequencies, whilst seamlessly notching out a couple of unpleasant resonances. Pinning down the correct frequencies to notch out is greatly facilitated by the musical keyboard; if the open 'A' string on your acoustic guitar is booming, simply choose the low-mid band, select Digital 2 and a high Q value, and hit the relevant note to nail it. The ability to control separately the noise and distortion of the analogue modelling is very worthwhile, and the exaggerated THD settings can work a treat when you want to fuzz up a bass guitar or similar source.

The Digital 1 mode, with its 'asymmetrical bell curves', is likewise innovative and surprisingly useful. To give a simple example, I quite often find that I want to apply a broad boost in the 100Hz region to kick drums or bass guitars. I don't mind if that boost extends downwards to 50 or 60 Hz, but on the other hand, I don't want it to lift the muddy area between, say, 150 and 300 Hz. With most EQs, I need to juggle settings on two or three bands to get the right shape, and the tone can often start to sound audibly processed. With H-EQ, I can set up a Digital 1 bell curve to boost at 100Hz, then skew the 'Q' control heavily to the left. Voilà: a lift at 100Hz that rolls off naturally and gradually below that, but much more steeply above it, to the point where it actually introduces a gentle dip from 150-250 Hz. At the other end of the frequency spectrum, you could use the asymmetry the other way around, to add a broad high-frequency 'air' boost to a vocal, without applying it to those dangerous sibilant frequencies.

All in all, then, I think Waves have brought some interesting new thinking to the idea of an all-in-one plug-in that can take care of all your EQ needs. And what's more, they've done so at a very reasonable price, especially if you buy in time to take advantage of the current special offer. Its MSRP is close to that of the now-venerable Renaissance EQ, to which this is wholly superior in pretty much every way, apart from having a considerably higher CPU load that would take a toll if you tried to use it on every track in a busy mix. If I have a reservation, it's that the interface feels a little crowded and, thanks to the slightly glitchy click-and-drag functionality, is not quite a match for the likes of Fabfilter's Pro-Q or DMG's EQuality in the slickness stakes. But it's not far behind, and when you consider the unique sonic variety and individual features on offer, H-EQ is a very tempting buy.

In terms of features, the most obvious rival is perhaps 112dB's Redline Equalizer, which also allows you to choose different analogue emulations for each band, and to add harmonic distortion to taste. If you don't need the former, there are innumerable other high-quality EQ plug-ins offering vintage and modern flavours, from developers such as McDSP, Sonalksis and PSP.

Waves' H-EQ is a do-everything equaliser at an appealing price, with some unique features that set it apart from the herd.