Eddie Kramer is a producer and engineer who knows a thing or two about rock & roll, so when he gives his name to plug‑ins modelled after his favourite hardware, we expect great things... 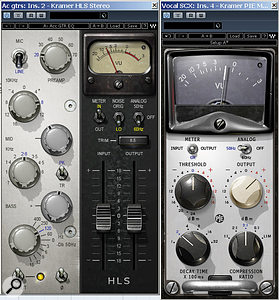 It's been a couple of years now since Waves introduced the first of their Signature Series plug‑in bundles, modelled after the actual hardware used by some of the best‑known engineers in the business. The plug‑ins in the series fall into two categories. On the one hand, there are 'task based' plug‑ins dedicated to particular instruments such as bass or electric guitar, which model the entire processing chain that an engineer like Tony Maserati or Chris Lord‑Alge would typically use on those instruments at the mix, and present the results in a friendly interface with just a few controls. However, Waves have also produced straightforward, faithful emulations of individual pieces of vintage hardware from those engineers' studios.

So, in addition to the Eddie Kramer Artist Signature Collection, which contains 'task based' plug‑ins reproducing Kramer's favoured vocal, bass, drums and guitar processing chains, Waves have now introduced the two more conventional processors under review here. Kramer HLS reproduces an input channel from the famous Helios console found in the Rolling Stones Mobile, while Kramer PIE is an attempt to recreate the vintage Pye compressor in software.

These are the first Version 7 Waves plug-ins I've tried, and the installation procedure has changed since I last tested any. If your studio computer is connected to the Internet, you can run an 'online' installer which downloads and installs only the plug‑ins you're after. If not, you have to download and run the entire 1GB-plus Waves 7 complete installer, which is a bit of a nuisance. It also turns out that Version 7 plug‑ins cannot co-exist in a system with any other Waves plug‑ins earlier than Version 6, so when you run the Version 7 installer, it automatically uninstalls any Version 3, 4 or 5 Waves plug‑ins on your system — even if you only want to demo a single Version 7 plug‑in. There are plenty of people out there still using these earlier bundles, myself included, and this is a major disincentive to investigate the new plug‑ins.

On the plus side, at least Waves are now using the standard iLok authorisation procedure whereby you redeem a licence code at your iLok.com account, then download the licence in the usual way.

Helios Is Other People's

The Helios equaliser has been modelled before by other manufacturers, and an official, licensed version using the Helios name is available for Universal Audio's UAD2 platform. Waves' version doesn't use the Helios name, but the look and feel leaves you in little doubt as to what it's supposed to be. It also goes further than the UA version, in that it models the characteristics of the line and mic preamp stages as well as the EQ itself. (Waves are keen to point out, too, the attention to detail that has gone into the ballistics of their virtual VU meter, which does indeed bounce in a comfortingly musical fashion.)

The equaliser is a quirky design, which takes some getting used to. Simplest of the three bands is the high shelving filter, which is operated by a gain knob stepped in 4dB increments. The middle band offers a choice of eight centre frequencies, with a freely variable knob that applies either boost or attenuation, depending on the setting of the Pk/Tr switch. The low band is particularly odd. Moving the main knob clockwise from zero brings in a low shelving filter, this time in 3dB increments. Moving it the other way selects one of four low/low‑mid centre frequencies that can be boosted (but not cut) using the adjacent dial.

A few minutes' trial should be enough to convince anyone that this is not a surgical equaliser. The high and low shelving bands allegedly turn over at 10kHz and 50Hz respectively, but their effects are obvious well into the mid-range frequencies, while the mid-range band is about as coloured as EQ gets. And as if that weren't enough, you can ramp up the gain on the preamp stage to add further saturation. Thankfully, doing so doesn't actually affect the level of your signal, it merely replicates the side‑effects. As these can include a large dose of hiss, Waves have added a 'low noise' option.

Without access to the real thing, I can't tell you whether Waves' is a more accurate emulation than Universal Audio's, but I was surprised by how different the two are. I duplicated an audio track and inserted the Waves on one copy and the UA on the other, with polarity reversed. There was some cancellation, but the signal level dropped only by a few dB.

I had thought the UA Helios a really nice EQ, and still do, but the Waves version struck me as noticeably superior: it has a hairy, larger‑than‑life quality that makes the UA version sound polite by comparison. I also preferred Waves' user interface, which is larger and more friendly, and allows you to set knob positions by clicking on the numbers as well as by 'turning' the knob itself. The only irritation concerns the factory presets, which all seem designed to sound impressive by making the signal louder.

I liked the Kramer HLS plug‑in in many roles. The high shelf adds a nice gloss to drum overheads, while the mid-range boost brings electric guitars right into the listener's face, and adds a chewy bite to rock vocals. The preamp emulation is hit‑or‑miss; I didn't like it on drums at all, but on anything with strings, it sounds wonderful. I found plenty of places to use this EQ in my mixes, but for me, the killer application is on acoustic guitar. Add 8dB of high shelving EQ, engage the low shelf, crank the line preamp up as high as it will go, and you get a glorious, rich sheen without a hint of harshness. Lovely — albeit still obviously hissy, even in low‑noise mode.

As sought‑after British vintage gear goes, the classic Pye compressor is up there with the Helios EQ, though the only other plug‑in emulation I'm aware of is the one in the Focusrite Liquid Mix, which I haven't used. Again, Waves' version doesn't use the Pye name, but in other respects it's visually close to the original. The control set is simple: there's a fixed attack time, a choice of six release times and five compression ratios, plus Threshold and Output gain controls to set how hard the compressor is driven.

Waves say that the original is renowned for being "among the best bus compressors of all time” — not that you'd know this from their preset library — so my first thought was to try the Kramer PIE plug‑in on the master bus. Perhaps it was just me, but I didn't really get on with it in that role: with the fast release settings I normally use, its action was a bit too obvious, and there was too much pumping going on for my tastes. It can be a little disconcerting to hear obvious compression artifacts even when the gain‑reduction needle is barely moving!

Elsewhere, by contrast, its unsubtle nature is exactly what is wanted, and if, by "bus compressor”, Waves mean something you might strap across a drum group to add unbridled rock & roll excitement, I'm with them 100 percent. It's likewise perfect for smashing room mics and, in more moderate doses, works nicely on acoustic guitars and vocals. On bass guitar, meanwhile, its fixed attack time makes note attacks 'pop' in quite a distinctive way, which wasn't to my taste but may well be to that of others. Though it's not the most versatile processor in the world, this is one compressor that's not shy about making its presence felt, with a sound that is both distinctive and powerful.

Like many faithful emulations of vintage units, these two plug‑ins are limited to doing what the originals can, and Waves have made no attempt to add extra functionality beyond giving you the option to reduce noise and hum. As a result, they have pretty restrictive parameter sets, and it would be limiting by modern standards if they were your only EQ and compressor.

That said, within half an hour of installing Kramer HLS, it was all over the mix I was doing at the time. I've never heard another plug‑in EQ that is quite so nice on acoustic guitars, and it's no slouch on other rock instrumentation either. It might not always be the best thing for the job, but it nearly always makes a positive contribution. By contrast, the PIE compressor fairly often struck me as just being the wrong processor for a particular role — but when it's right, it's very right indeed, particularly on a drum submix. I think anyone who demos these plug‑ins will be tempted, so it's just a shame that doing so is such a pain for anyone running earlier Waves collections on their studio machine.

These are two vintage emulations that have rock & roll character in spades.