I first saw Vocaloid demonstrated by Yamaha at the 2003 Frankfurt Musikmesse, and even though the chap presenting the demo spoke few words of English, the product's impressive capabilities were obvious. In a matter of minutes, the demonstrator had dragged a few notes onto a piano‑roll display, tapped in some lyrics, added vibrato, dynamics and pitching characteristics and had the thing singing a song. 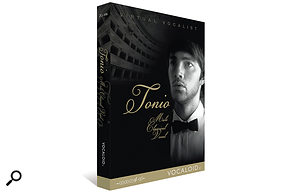 Tonio is the latest in a long line of products designed by third‑party companies, using the Vocaloid engine to power their vocal sample libraries. To create Tonio, Zero‑G recorded a classically trained male singer, apparently blessed with a register reaching from baritone to tenor. Nevertheless, opera singers around the world won't have to fear for their jobs just yet, as a considerable programming effort is required to turn each phrase into something that sounds realistic rather than robotic. While it's pretty easy to enter and edit notes and lyrics in the piano‑roll style note grid, it's the process of sculpting those notes and words into something approximating a human performance that proves difficult. Vocaloid's tools are easy enough to understand, it's just learning when and where to use them that takes the time. Even the official Tonio demo, in which the voice is made to sing 'Una Furtiva Lagrima', is riddled with synthetic artifacts.

For most projects, it would simply be better to hire a local singer to do their stuff for half an hour — that is, unless something off‑the‑wall is required, or if the vocal lines are intended to be used as backing, where their shortcomings will be less noticeable. Indeed, Vocaloid allows the layering of up to 16 separate tracks, so complex — and relatively convincing — choral parts can be created.

But perhaps the real problem here is that something as precise as an operatic vocal isn't the ideal material for Vocaloid processing. We've all become accustomed to processed vocals in pop: in the '60s they were fed through Leslie speakers, the '70s saw the extensive use of vocoders and Eventide Harmonisers and, in more recent times, Antares Autotune has ruled supreme. But opera just sounds odd when coloured with an electronic effect.

Tonio works as a stand-alone product, which can be made to sync with a sequencer using Rewire if all the relevant settings are made in exactly the right order. Frustratingly, each time an edit is made to the Vocaloid project, the information has to be sent to the Rewire host before playback is resumed.

The DVD also installs a VSTi plug‑in but, due to the bespoke MIDI data Vocaloid writes and reads, it doesn't integrate as seamlessly as a normal plug‑in. Zero‑G acknowledge that the plug‑in doesn't work with Sonar, and I couldn't get FL Studio to see it either, but I did get the stand-alone component to sync with both DAWs (and Cubase) via Rewire, albeit with some inexplicable digital crackling in the audio output paths.

In summary, while the Vocaloid technology remains impressive, Tonio is definitely something to demo before buying. Tom Flint