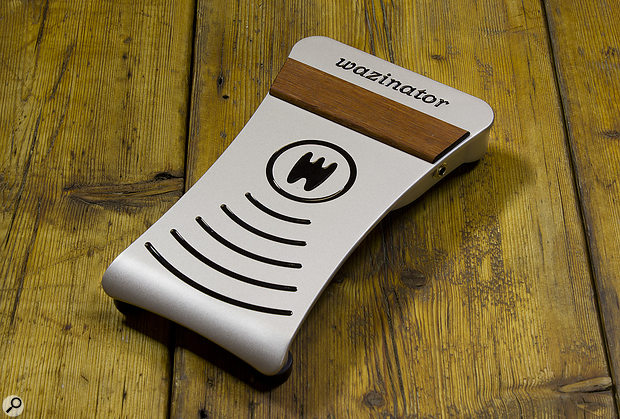 In the last couple of years, having hitherto only ever played with a band, I’ve enjoyed playing solo gigs with nothing but my voice and acoustic guitar. It’s possible to create a wonderfully intimate sound at such gigs, or to really belt things out. But for some songs at least, I’ve always felt that the sounds are lacking — largely, I concluded, because I missed the rhythm section behind me, and more so the drums than the bass guitar. Working with a percussionist of some sort is an option, of course, but there will inevitably be times that you’re going to need to provide that ‘rhythm section’ yourself.

To that end, I’ve been experimenting with a number of devices and approaches, from sample-triggering pedals, to a simple off-beat tap of my foot on a tambourine. While I like the tambourine as a sort of snare-drum substitute, it doesn’t really fill out the sound or drive the song along in the way a kick drum can. And when it comes to kicks, I’ve never really got on with the sample-based solutions for acoustic gigs. So I found myself in the market for an acoustic stompbox that would give me the option of adding a little bottom-end weight but without overpowering the guitar sound.

One product that appealed to me almost straight away — and still does — is the Wazinator Drop Kick. The basic idea isn’t particularly new. A small pickup/mic underneath amplifies the acoustic sound when you tap your foot on the ‘pedal’. But the execution of the idea is both elegant and effective, and it sounds different from any other such box that I’ve used.

Wazinator are an Australian company, and they’ve been making acoustic stompboxes for a while. Their first product, which is still available, was the larger Wazinator Classic. This comprises a huge plectrum-shaped slab of wood with a chunky, round passive pickup mounted on top near one of the three corners — the pickup’s designed to plug into an instrument amp, though with suitable amplification it could also be hooked up to a console. As you tap your foot on the wood, the air gap inside the pickup system is compressed and the result is a deep, woody thump. There’s also built-in mechanical protection (effectively an air valve) to limit the possibility of particularly hefty stomps causing damage further down the signal chain. Having proved popular, it was inevitable that Wazinator would develop variations on the theme and the Drop Kick is one of a couple of recent additions to the range, the other being the BabyGrand, which I hope to get my hands on in the near future. 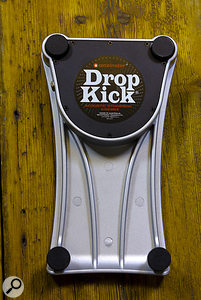 The underside view.The Drop Kick is slightly lower in price than the Classic and, to this reviewer’s eyes at least, it boasts greater aesthetic appeal. With a chassis formed from a die-cast alloy, it is fairly lightweight but more than strong enough for life on the road. A narrow strip of oak across the toe end is claimed to give it its unique tone, and while I have my doubts about quite how responsible that actually is for the tone, it looks great and the end result is certainly a lovely and guitar-appropriate sound, as I’ll discuss later. On the underside, what looks like the same pickup arrangement as employed in the Classic is housed upside-down and neatly bordered by the rigid alloy chassis.

At less than half the width of the Classic, the Drop Kick is still fairly long and large compared with most electric-guitar stompboxes — about the size of a chunky wah-wah without the pedal — but it’s clearly designed with portability in mind; I managed to fit it in the admittedly fairly large pocket of my acoustic’s soft case (though I’d want some additional cushioning between it and my guitar!).

The curve of the metal at the ‘heel’ end is designed such that you can rest your heel on the curve and bring either the ball of your foot or your toes down on the same spot easily (whether you’re sitting or standing), which makes for great consistency of tone. If you place your foot in the most obvious position and wear shoes, your foot hits the oak and the sound is a sort of deep pulse that’s somewhat reminiscent of an 808 electronic kick — more acoustic, or ‘organic-sounding’, for want of a better phrase, but with the same sort of deep, pitched component with a little sustain. There’s little of the click you might hear in many kick drums, but that’s not needed here — it means the Drop Kick is providing the reinforcement that’s needed without trampling over the guitar and vocal frequencies.

This ‘stock sound’ of the Drop Kick worked well with a range of playing styles, and I tried it with regular and amplified acoustics, as well as my resonator. Interestingly, though, I could coax a wider range of tones out of the Drop Kick by varying my foot position to hit the metal rather than the wood, and also by taking my shoes off, cranking the gain and using my toes!

All in all, there’s little not to like here. The price is a little higher than most acoustic stompboxes here in the UK, but this one offers something a little different from anything else I’ve tried. You do have to be careful not to overdo it — I was at first tempted to play driving rhythms beneath every song, and as with any instrument, you really do have to consider whether each song will benefit from its presence! I was almost tempted to buy the review model, though my gigs are infrequent enough at present that I decided to take a little more time and evaluate a couple of other options. All in all, if you’re in the market for an acoustic stompbox, I highly recommend trying this one out — and if you can’t do that, then at least check out the video demos on Wazinator’s web site, which are an accurate portrayal of the results you can expect.