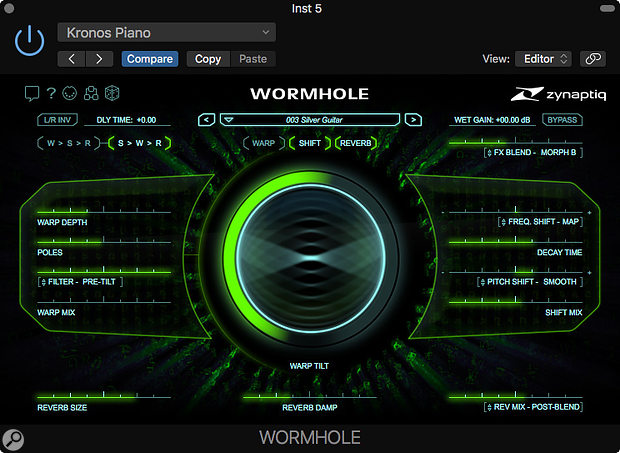 Zynaptiq’s unique blend of pitch-shift, delay, reverb and other effects will take you into parallel musical universes!

Trying to describe what Zynaptiq’s Wormhole sounds like is a bit like explaining the workings of the Space Shuttle to the Wright Brothers. It covers a huge amount of sonic ground, and none of what goes on behind its enigmatic GUI is straightforward. Fortunately, driving it isn’t that difficult and there’s a vast library of factory presets to get you started, as well as a weighted randomisation feature to help create meaningful variations.

I suppose the easy way to start is by saying that Wormhole comprises a linked array of sound processing sections that can be brought to bear in many different ways, some of them musical and ethereal, others best suited to movie sound design and some just plain weird. If you want shifted, reverb-drenched shimmers to add to your guitar parts, it can do that, but it also excels at alien robot voices, alien machinery drones, pitch-manipulation effects, sound morphing and many other kinds of sonic mayhem. New technology is at work in the pitch-manipulation algorithms, which are capable of a massive four octave range in either direction, and can also perform frequency shifting of up to 4kHz free of aliasing and other undesirable side-effects.

Wormhole is available in all the usual Zynaptiq-supported Mac and PC plug-in versions and is authorised using the iLok system, either to a physical iLok or an individual computer. A time-limited free demo is also available. Although Wormhole introduces a noticeable CPU overhead, it isn’t nearly as hungry as Zynaptiq’s Adaptiverb, and on a modern iMac, a typical preset takes up perhaps 25 percent of one of Logic’s CPU meter bars. A MIDI Learn facility is available for all the controls, but note that mappings are saved on a per-preset basis, so if you need more global control, it is best implemented from your DAW.

The GUI bears a passing resemblance to that of Adaptiverb, and provides control over the main processing sections: spectral warping, pitch and frequency shifting, dual random-modulated hall reverbs, delay and wet/dry morphing or blending. A row of small icons near the top left of the screen access various useful functions, including the aforementioned MIDI Learn, plus tooltips, a manual and a signal flow block diagram. The last of the five icons, a die, is a parameter randomiser. This is designed not to change too many parameters at once so the results are more likely to be variations on the initial theme, rather than random chaos. It actually works well, and I came up with a number of very usable new treatments by using it.

Before we go into detail about what each section contributes, an understanding of the signal path is essential. As with most effects, there’s a wet and dry path, but in this case they might better be described as wet and damp: the notionally dry path can have a delay inserted, and once it is blended back in with the wet sound, reverb can be added as a global effect to the mixed output. Positive delay time values delay the wet signal path while negative values affect the dry path, and there is also an L/R invert option whereby one channel of the dry sound and the opposite channel of the wet sound are delayed, which can be very sweet for doubling or widening.

The main processing path is fed from the Delay section, which is where the signal splits, into the Warp and Warp Mix sections. Next come Shift and Shift Mix, though the position of the Warp and Shift blocks can be swapped if required. The wet signal then goes into its own reverb section and from there into the Blend control.

The names give you a good idea of what most of the sections do, but it is important at the outset to establish the difference between pitch-shifting and frequency shifting. Pitch-shifting is the process we all know and love, whereby the shifted sound retains its internal pitch coherence but moves up or down by a musical interval such as a third or fifth. Frequency shift, by contrast, adds or subtracts the same offset in Hertz from every frequency within a signal, which usually means that unless you’re working with a sine wave, a pitched sound becomes enharmonic as its individual partials are no longer musically related.

Reverb does what you’d expect, and while there are few controls, the actual reverb quality is very good. The Blend section isn’t entirely straightforward, however: in addition to offering a wet/dry mix option, it can also generate a true morph between the dry and wet sounds, with a choice of using the wet signal as the morph reference or the dry. Morphing is particularly useful for creating effected vocal sounds, as balancing the wet/dry morph lets you retain intelligibility without adding in the raw unprocessed dry sound and giving the game away. It can also help make the more musical effects seem more organic.

Which brings us nicely to Warp, which is based on spectral processing described by Zynaptiq as “time-domain local spectrum inversion”. The result is probably easier to describe than the method used to produce it, and to my ears, it has much in common with FM synthesis, in that it is easy to produce metallic timbres and enharmonic overtones. A Warp Depth control affects the part of the spectrum to which the Warp process is applied, with low settings confining the processing to high frequencies; as the control is moved clockwise, more of the audio spectrum is affected.

Poles emphasises resonant peaks within the Warped sound, while the large Tilt knob in the centre of the screen works like a fader with a positional halo around it. This changes the timbre of the sound rather like a formant shifter, though what it actually does is more complex. Higher settings can cause deliberate glitchiness in the signal, and there’s no anti-aliasing, so any ‘rogue’ frequencies generated become part of the effect. There is also a filter, which can be switched pre- or post- the Tilt section. Smoother results are achieved in the latter configuration.

After leaving the Warp section, the signal encounters the Shift section where both pitch shift and frequency shift can be applied. The frequency shift algorithm is designed to suppress sidebands and carrier bleed, and two pitch-shift algorithms are available. Both can also be used in detune modes, where the two channels of a stereo signal are shifted in opposite directions. A Decay Time slider reduces the decay time of the shifted components, and can help produce a more natural sound when combined with the dry signal, if natural is what you are after! A Mix control adjusts the pitched/unpitched balance leaving this stage, after which it passes through its own delay block before ending up at the FX Blend control. The output reverb can be positioned before or after the Blend section and has very basic controls for reverb size, damping and wet/dry mix.

A Diet Of Wormhole?

I’m guessing that SOS readers will be most interested in the musical applications of Wormhole, and there are plenty of those. The various combinations of pitch-shifting, subtle detuning, reverb, delay and sound morphing often produce results that are seemingly more than a sum of their parts. However, the atonal contributions of the Warp section rarely suit conventional music, so it is best used sparingly, if at all. The more musical effects vary from subtle stereo detuning, which can create a type of chorus effect, to shifted reverbs, image widening and some quite psychedelic washes. Wormhole is capable of dramatic stereo doubling, pitch-shifted shimmering reverbs, subtle detuning and cloud-like musical textures, some of which remind me of the magic that Zynaptiq’s Adaptiverb can achieve — though Adaptiverb can also go places that Wormhole can’t. A test guitar part became almost piano-like in one instance, and morphed into a ‘just add water’ New Age track the next. What’s best is that the sounds actually inspire you to explore new ideas, which is why my next album of ‘music to soak lentils by’ won’t be long coming.

Sound designers, unlike musicians, will no doubt make more extensive use of the Warp section, and I can envisage Wormhole being used by a lot of professionals in this field. It doesn’t have a traditional ring modulator and oscillator source, so it can’t do Dalek voices; but if you need a Gelf trader from the crusty side of a Jovian moon, or a three-armed mercenary from beyond the Kuyper belt, no problem. The range of voice sounds that can be coaxed from this plug-in is impressively wide, and in most cases clarity of diction can be preserved — though you can also dial in incomprehensible alien jabbering if that’s what the job demands. When it comes to sci-fi sounds, almost any audio input can be turned into alien winds, space-beast breath, starship drive rumble, the methane seas of Metabeelis III or weird machinery, so the sound-design potential of Wormhole is huge.

It also pays sometimes to ignore the categories into which the presets are divided and try them on anything and everything. I tweaked one of the effects presets and ended up with something that turned human speech into what sounded very much like Klingon, and drum and percussive sounds can likewise change in unexpected ways when subjected to the full might of Wormhole. The more you play with the deceptively small number of controls, the more things you find this plug-in can do. Once you fall into the Wormhole you may find yourself reappearing in an entirely different part of the sonic universe!

Wormhole will be of considerable interest to sound designers, and it also has enough straight musical applications to keep experimental musicians busy for months.