Q. Can I leave my mic powered up?

I've just bought my first mic, a Rode NT1A, which requires phantom power, and I'm wondering if there's anything wrong with leaving it plugged in with phantom power switched on for long periods of time? It's a bit of a hassle to have to take it off the stand, unplug it and put it away every time I stop using it.

Technical Editor Hugh Robjohns replies: There's no problem with leaving your mic powered up — many professional studios prefer to keep their mics powered all the time, and there are some good arguments in favour of this approach. 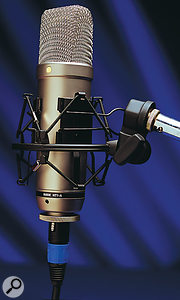 Leaving a condenser mic such as this Rode NT1A on it's stand and powered up when not in use does no damage, though you might want to keep the dust off with a polythene bag.

The most likely cause of damage to a mic is accidentally dropping it on the floor, and that is most likely to happen when putting it on or taking it off a stand! So avoiding that risk is probably a good thing. Also, if the mic is supported in a shockmount, continually taking the mic in and out of the mount will tend to stretch the suspension elastics and weaken the clamps, again making it less reliable over time.

So, assuming that you have space to leave your mic on its stand, it's not a bad idea. However, you should take steps to make sure that the capsule is protected from dust when not in use, so placing a clean polythene bag (a freezer bag, for example) over the mic when you have finished with it is a sensible precaution.

Leaving the mic powered will also help to keep moisture at bay in most locations (as long as we are talking about a room in a house rather than a shed in the garden). As well as keeping dust away, a polythene bag over the mic will also help keep warm air around the capsule.

Most electronic components are quite happy if powered permanently, and generally fail when power is applied after being turned off. So leaving a mic powered is unlikely to shorten its life significantly, and may well actually prolong it.

As I said, a lot of high-end studios leave their mics on stands, powered and protected with bags — it's not an unusual practice at all. Of course, in those situations the mics are in use pretty much every day, but if having the mic on a stand, powered and ready to go, helps make it easier to record something when the mood takes you, why not? It would be a shame not to record just because you can't be bothered to get out a mic stand, unpack a mic and plug it all up!