Q. How can I achieve zero latency from my software synths? 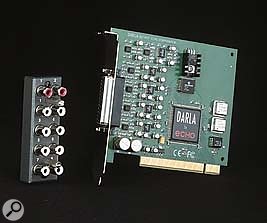 I have an Echo Darla20 soundcard and I am a bit worried about the possibility of achieving zero latency when I'm using soft synths like those in Reason. Can you give me any advice?

Features Editor Sam Inglis replies: It's impossible to achieve true zero latency with any soft synth. When you're recording an audio input, most decent soundcards allow you to monitor the input directly rather than monitoring the recorded signal, which eliminates latency from the monitor path. In the case of a soft synth, however, the audio signal you want to monitor is generated by the computer in response to a MIDI input, so there's no way of eliminating the delays caused by the soundcard's output buffering, as well as any processing delay incurred by the soft synth itself.

That said, you should be able to reduce the latency to negligible levels with a soundcard such as the Darla20, provided you are using ASIO or WDM drivers, rather than MME or Direct X drivers. If you are having problems with latency using Reason , I suggest you make sure you're using the Darla20's ASIO drivers, and experiment with adjusting the buffer size in the soundcard control panel (the smaller the buffer, the lower the latency).