Q. How can I stop my drum loops from going out of sync? 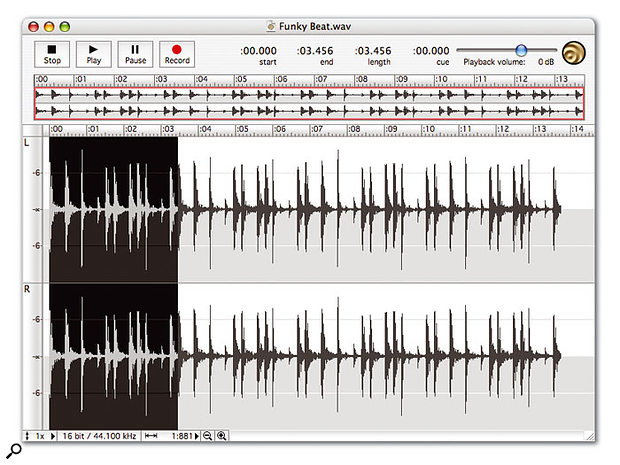 If a four-bar drum loop refuses to stay in sync, chopping it into one-bar sections and triggering these individually, rather than triggering the whole thing every four bars, will often help.

I have some sampled drum patterns that I am trying to loop. I can set the loop's start and end points so that they cycle round and round smoothly with no clicks or glitches at the loop points but when I lay them down and try to run my sequencer alongside them to record instrumental parts, I find that they are losing sync over the course of the track, sometimes quite quickly into the song. What's going wrong and how do I fix it?

Sound library developer Steve Howell replies: People often refer to samples of drum patterns as 'loops' but in practice, they tend not to be. They are, in fact, more like 'triggered phrases'. The easiest way to keep your samples in time is not to loop them but to trigger them every couple of bars.

So, for example, let's say you have a four-bar pattern that's 121bpm: top and tail the sample (edit the sample's start and end points) as precisely as possible, remembering to cut the sample end point at the first beat of bar five. Set the sample to 'one-shot', or 'play to end', or whatever your sampler calls the function, and set a medium release time. Now set your sequencer's tempo to 121bpm and trigger the sample every four bars. Assuming that you set the sample's playback properties to one-shot, you shouldn't have to sustain the trigger, as the sample will play right the way through to the end regardless of the length of the trigger note. It's also probably best to quantise those triggers so that they are right on the nose.

What will happen here is that the pattern will be triggered every four bars, so if there is any slight deviation of tempo between the sample(s) and the sequencer, it will be 'refreshed' every four bars thus maintaining sync throughout the song. For this reason, it's best to use shorter phrases/samples because the longer they are, the more chance there is for the sample(s) and sequencer to wander away from each other (see screenshot, left).

Of course, the other way to do it is to use Propellerhead's excellent Recycle software which can slice your sample up into its component parts so that the phrase can be played at any tempo. Many software sequencers and DAW's have built-in beat detection algorithms which can accomplish much the same thing.