Q. How do I compensate for latency in Logic? 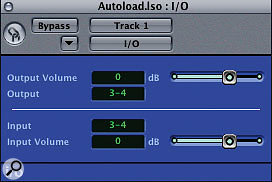 I use a G5 with Logic Pro, a TC Electronic Powercore, a MOTU HD192 interface and a variety of plug-ins, but have recently discovered the wonders of running already recorded tracks through outboard units and back into my DAW, to give me some different flavours in my mix. The only problem with working like this is latency. Ideally I'd like to be able to set a nudge value in Logic so that whenever I record like this I automatically just nudge the effected track back into place. Logic, however, doesn't appear to have a user-defined nudge, and also I've no idea how to work out the exact latency. At the moment I'm moving tracks by eye, but this is a bit hit and miss, especially for drums.

Editor In Chief Paul White replies: Latency is a complex issue and it varies depending on how many other plug-ins are running and whether or not the delay compensation is set to 'all' or just to tracks and instruments. Latency will also increase when you use one or more Powercore plug-ins. That means that while you can determine an offset time for a given setup, it may change if you bring in new plug-ins or take out one that you used previously. Where the outboard device is a reverb, you don't really need to worry, as the extra delay simply amounts to a bit more pre-delay, and you can then reduce the pre-delay on your outboard gear. If you're using outboard for mastering, the delay is again unimportant, as everything in your mix will pass through the mastering device and so be delayed by the same amount.

Latency is more of an issue when you need to use something like an analogue compressor or EQ on an individual track. The best way to tackle this is to use the I/O plug-in, under 'Helper' in Logic 's plug-in menu. It works as an insert point, like those on an analogue console, routing the track's signal to an alternate output on your audio interface — say, 3-4, as in the screen shot above — then back in on analogue inputs, before continuing through the signal chain. The I/O plug-in works as part of the automatic latency-compensation system within Logic but what it won't do is compensate for any delay caused by the device itself. However, in my experience few outboard devices add enough latency to be of concern anyway. 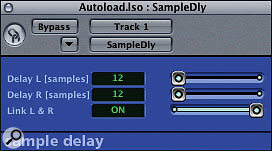 The Sample Delay plug-in in Logic does what it says on the tin, delaying the track down to sample level.

There are further tricks, using some of Logic 's other tools, such as copying the track, phase inverting it (you can use the Gain plug-in, which is also in the Helper section), inserting your outboard device, then using the track delay feature to find the setting that gives you the most cancellation. The problem here is that Logic 's arrange window doesn't allow you to make adjustments down to single sample level, so the alterations may well be too coarse anyway. If you are really keen to get things spot on, you could use the smallest value of negative track delay, then insert Logic 's Sample Delay plug-in and adjust that to find the cancellation 'null point'. But in most cases the delay through the outboard device is only a millisecond or two (less if it is analogue), which means that it has no real musical significance. However, if you are prepared to go to this trouble for each bit of outboard gear you plan to use, you can make a note of the delay settings and then apply them again in future, as they will always be the same as long as you are working at the same sample rate and have the delay compensation turned on at least for the audio tracks in Logic.