Q. Will adjusting speaker balance to compensate for your hearing sensitivity skew the stereo mix? 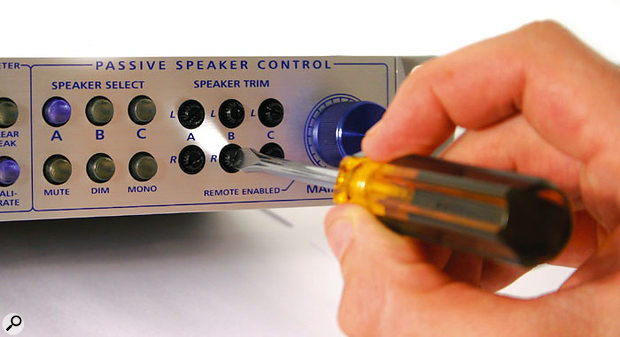 Everyone’s left and right ears have very slightly different sensitivity, and that can affect where between the stereo pair of speakers the 'phantom centre' appears. You can compensate for that by adjusting the speaker levels on a monitor controller, on the amp/speakers themselves, or in software — but if you use software, be sure not to print your mixes through this adjustment!

I’ve read in previous SOS articles on calibrating monitor controllers that it’s a good idea to fine-tune the loudspeaker trims by ear to centre the stereo image. I’m probably being thick here, but surely if one of your ears is more sensitive than the other, setting a stereo image by ear will result in all your recordings having a skewed stereo soundscape — so if you’re a bit deaf in your left ear, say, you’ll raise the relative level of this monitor to get a personal central balance that is actually incorrect. Is that correct?

SOS Technical Editor Hugh Robjohns replies: No. Exactly the opposite! Essentially, the idea is to adjust the relative sensitivities of the two monitor speakers so that when a source is actually panned dead-centre in the mix, it sounds absolutely central to you, listening at your normal seated position. Everyone has slightly different left/right hearing sensitivity quite naturally. So what we’re doing here is making the speakers sound right to the you, as the primary user. In this way, the monitor speakers serve as an accurate reference monitoring tool to you, so that you can trust what you hear in terms of accurate acoustic spatial positions from panned sources. In other words, when you pan something to sound in the middle of the sound stage, it really will be... and other panning positions will be exactly where you think they are, too.

In the previous century, when I helped to train BBC sound balancers for radio and TV, the monitoring section of professional broadcast consoles always had balance controls so that individual mix engineers (sound supervisors and studio managers, in BBC parlance) could tweak the way the stereo image was being presented to suit their own perception. It was normal to find a group of trainees requiring quite different monitor balance settings for a centre-panned source to be perceived as coming from the centre of the speakers’ stereo image.