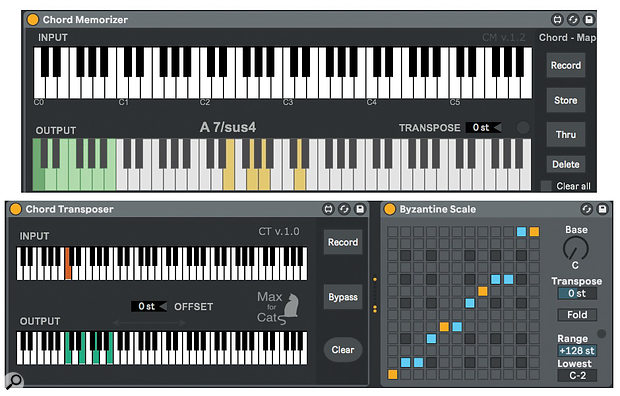 We explore the wealth of third-party chord generators available for Live.

This month we'll look at several ways to generate chords in Live. The in-house solution is to use Live's Chord MIDI effect, which lets you dial in as many as six intervals at which notes are added to an incoming MIDI note. For more than one chord voicing, you can combine several of these in a MIDI Effect Rack, separate them by note range, and augment them with other Live MIDI effects such as Scale and Arpeggiator. But for any more than a few chords this process is both limited and a bit tedious. Fortunately, there are a variety of third-party devices for memorising and generating chords. The 'Chord Machine Plug-ins' box lists nine powerful, modestly priced options.

The first job of any chord machine is to let you trigger chords by playing single MIDI notes. Unlike Live's Chord effect, the trigger notes typically have no relation to the chords they trigger — they simply let you set up sections of your MIDI keyboard to play chords. The simplest, no-frills plug-in for that is Max For Cats Chord Memorizer (Screen 1 above). You click the Record button and then play a chord or click its notes on the upper of two on-screen keyboards. You then click the Store button and play the desired trigger note or click it on the lower on-screen keyboard. To avoid a lot of mouse clicking, map the Record and Store buttons to MIDI controllers such as footswitches.

Chord Memorizer chords can have as many notes as you like and you can enter them singly or in clusters. When you want to play chords on one section of the keyboard while playing melodies on another section, you can click Chord Memorizer's Thru button to pass all incoming MIDI notes. But to avoid passing chord triggers, leave Thru off and enclose Chord Memorizer in a MIDI Effects Rack. Add an empty chain to the Rack and use the Rack's Key Zones to separate the two chains. The Chord Memorizer Pack also includes the Chord Transposer device, which transposes a single chord across the entire MIDI note range. Playing the lowest note of the chord triggers it at its original pitch. You might also insert Live's Scale effect after Chord Transposer to keep things in key.

Next up is Cthulhu from Xfer Records (Screen 2). It is a chord machine followed by a programmable arpeggiator, and you can use either module by itself. The Speaker icon (top-left) toggles Cthulhu's internal instrument. To play an external instrument, turn the speaker off and set the target instrument track's input to Cthulhu. This is also how you record Cthulhu's MIDI output. The Note Latch button to the right of the speaker icon sustains the most recent chord until a new chord (or an empty slot) is triggered. This is especially useful with the arpeggiator. Each chord can have eight notes with individual velocities. The pitches and velocities of the current chord are displayed and can be edited in eight large readouts, and the chord's trigger note is shown to the left of the Velocity readouts. The Lock icon above each note display lets you lock that chord voice to the indicated pitch. (Locked pitches play with each incoming MIDI note, not just those assigned to chords.) The chord name in the thought bubble is Cthulhu's best guess at the current chord. The button with the eye icon above the trigger-note display lets you select chords you want to preserve. You can then delete the rest of the learned chords using the Remove sub menu of the Menu drop-down. 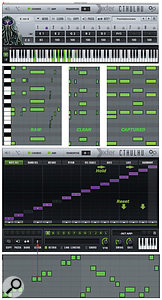 Screen 2: Cthulhu maps eight-note chords across the keyboard. Its versatile arpeggiator (bottom) can process Cthulhu chords or real-time input.Cthulhu comes with many preset banks and you can get more from ADSR Sounds (adsrsounds.com/synth/cthulhu-presets). Creating your own is also quite easy: select the lowest trigger note by clicking just above its key in the on-screen keyboard, click the Learn button and start playing chords. Each new chord will advance the trigger note one step. You can also extract chord progressions from your favourite MIDI files with Cthulhu's Import MIDI file option or by playing the MIDI file on the Cthulhu track (Opt/Alt-click the Learn button in this case). It simplifies things if you clean up the MIDI file first by deleting non-chord notes and then quantising the chord notes. Once you've created a chord set, use the Eye button and the Remove menu to select the keepers and take out the trash. Notice that you can also save a chord set as a spreadsheet (Menu: Save CSV file of Chords).

Cthulhu's arpeggiator is among the most versatile I've seen. It grabs and arpeggiates the first eight notes received from chords played manually or using Cthulhu's chord generator. It holds 12 patterns selected by notes C-2 through B-2. A pattern has as many as 16 steps and you can assign each step a specific note from the grab or you can choose one of eight typical arpeggiator patterns. An empty slot produces a silent step. The arpeggiator note-repeat rate ranges from 16 bars to a 512th note and the Clock numerical sets the number of repeats for each step. The Chord button turns the arpeggiator into a chord repeater. Finally, the buttons across the top select eight independent arpeggiator parameters. When the Link Lengths button is turned off, each of the step parameters across the top can have a different range. 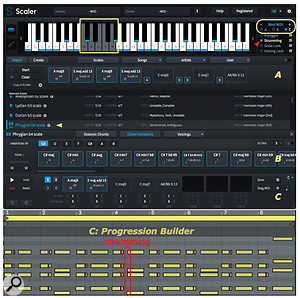 Screen 3: Scaler analyses its MIDI input to assign chords (A) and scales (B). It then generates alternatives from which you can create your own chord progressions (C).Scaler offers a different approach to chord creation and playback (Screen 3). It starts by analysing what you play either manually or from a MIDI clip to generate both scale choices and chord voicings: select Detect mode, click the Start button, feed it and watch it grow. Scaler lists the incoming chords and single notes in Section A just below its keyboard. (It also offers a fretboard visualisation.) The Binding buttons at the top right let you play through the chords in any of its three sections using the grey-shaded white keys on its keyboard display. Playback options include chord strumming and arpeggiation with typical modes. Section B shows a variety of possible chord voicings. These are based on the scale you choose from the list that Scaler displays between sections A and B. You can also drag voicings from sections A and B to build a custom progression in Section C at the bottom. You can export the Section C progression as a MIDI clip to a Live track, or you can record any section's output as you play from your MIDI keyboard. To do that, set the target instrument track's MIDI input to Scaler.

Scaler includes a variety of instruments from a drop-down menu at the top right to audition its chords, but you can silence them with the adjacent speaker button when targeting a Live instrument for playback.

Scaler also offers a bit of built-in inspiration. Select a scale from the Scale drop-down menu and you'll get a list of chords in Section B with variations and voicing options. Select a song style from the Songs menu and you'll again get a list of chords in Section B along with scale options. Or select a progression from the Artist or User menu to get saved chord sets. Once you have a batch of chords, you can create your own sequences in Section C.