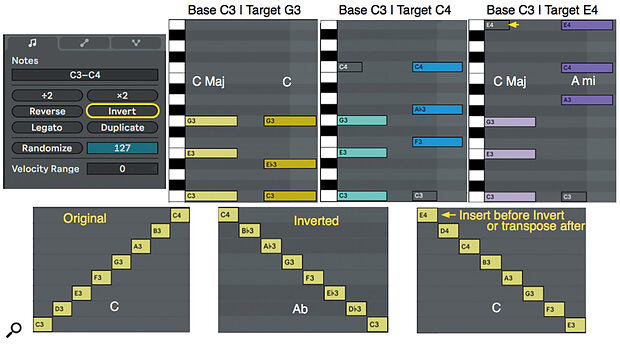 Screen 1: A C‑major triad is inverted with different targets (top), and a C‑major scale is inverted and transposed up a major third (bottom).

This month we’ll have a look at MIDI inversion, a simple but sometimes bewildering technique for breathing new life into your MIDI clips and streams. Inversion changes the relationship between notes in a chord or melody so that up becomes down while distance is preserved. For example, a major triad will invert to a minor triad, and a melody will invert vertically to a mirror image of itself. But the root of the inverted triad or key of the inverted melody might be anything. For the complete answer we need to know the ‘axis’ around which the inversion is measured. In Live it is possible to invert MIDI in clips or in real time. We’ll start with clips, where the process is easier to understand, and then build a MIDI Effect Rack for inverting MIDI on the fly.

When Up Is Down

For MIDI clips, the Invert button in the Notes tab of Live’s MIDI clip editor does the job, but in an unusual way. Instead of rotating notes around an axis, it measures each note’s distance above the lowest note in the clip (the ‘base’) and then moves it to that distance below the highest note in the clip (the ‘target’). That in itself can produce useful results, but it doesn’t give you control over the axis. However, that’s easily fixed by adding the desired top and bottom notes when the existing ones don’t suit. (Deactivate the added notes so that they don’t play in the inverted clip.) For example, if you want to have C as the axis of rotation, ensure that both the top and bottom notes are Cs, invert the clip and then transpose up or down by octaves to move the top C to the axis you want. In the middle example at the top of Screen 1, you would transpose the F‑minor chord down one octave to get C3 as the axis of inversion.

Inversion changes the relationship between notes in a chord or melody so that up becomes down while distance is preserved.

You’ll notice that the key usually changes when you invert. If you invert an ascending C‑major scale, you’ll wind up with a descending C Phrygian scale (Ab‑major scale played from C to C). You can work around the scale change by transposing after the fact, or as just described, by adding a note (an E in this case) above the original scale before inverting. One way to think about the scale change is to consider the sequence of intervals that make up the scale. For an ascending major scale this is 2212221 measured in semitones. Inverting the scale gives you the same sequence descending, resulting in the C Phrygian scale. Transposing that up a major third gives you an E Phrygian scale, taking you back to the key of C.

The first step in building a MIDI Effect Rack to invert incoming MIDI is to set up Live’s Scale MIDI effect to do the inversion. The Scale effect presents a 12‑wide by 13‑high note matrix with incoming pitches indicated by their horizontal position. Blue squares in the matrix indicate the outgoing pitch (vertical axis) corresponding to each incoming pitch. In the default setting they occupy the ascending diagonal from C to B, so that incoming equals outgoing. For inversion, we want to change that to the descending diagonal from the top C down to C#. The only other Scale effect parameter we’ll use is Transpose, which I’ll get to in a bit. 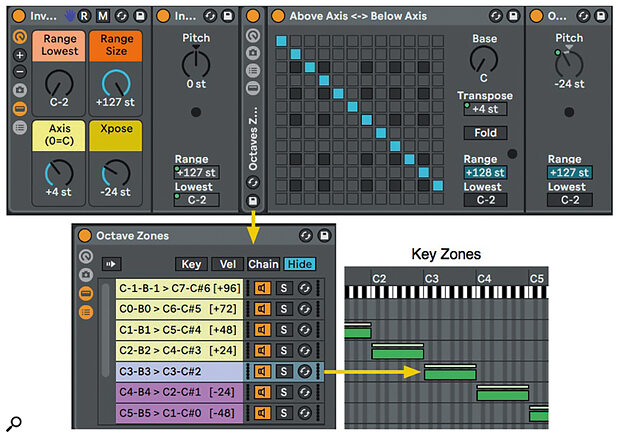 Screen 2: A MIDI Inverter Rack for processing incoming MIDI played live or from a clip or generated by a sequencer.

Place an instrument after the descending Scale effect, play a chromatic scale ascending from C3 (middle C) and you’ll hear a chromatic scale descending from C4. When you reach C4, the pitch will jump two octaves to C5. Because we want the scale to continue to descend across the full keyboard, we need multi‑octave transposes at each of these octave transitions. This is the tricky part in building the Rack, and it’s a bit simpler if we limit the note range to C1 through B7. Create a MIDI effect Rack with nine chains — one for each C‑to‑B octave as shown at the bottom of Screen 2. Set the Rack’s Key zones so that each chain only receives the notes in its octave. Insert a Pitch MIDI effect in each chain, set the C1 chain’s Pitch effect to +96 st and then subtract 24 for each subsequent chain. For example, the C3 chain will have a 0 st Pitch setting (or no Pitch effect) and the C7 chain will have a ‑96 st Pitch setting. The chains will then transpose their incoming C‑to‑B Key zones so that the full C1 to B7 MIDI note range is inverted when passed through the Scale effect.

To finish off the inverter Rack, insert a Pitch effect before the Octave Zones Rack, insert another Pitch effect after the Scale effect and gather everything in a new Rack. Assign the new Rack’s Macro knobs 1 and 2 to the first Pitch effect’s Lowest and Range settings — they set the range of notes that will be inverted. Assign Macro knob 3 (‘Axis’) to Scale’s Transpose; that transposes the output after inversion. Finally, assign Macro 4 to the last Pitch effect’s Pitch knob. That’s used for transposing the inverted output (ie. the axis) by octaves. The first Pitch effect blocks notes outside of its range, so if you enclose the Inverter Rack in another Rack and add an empty chain with a Pitch effect or a restricted key range, you can split the incoming note stream between regular and inverted segments playing different instruments. This can be lots of fun with a full‑size MIDI keyboard. With a +4 Axis setting the descending keyboard geography mirrors the ascending geography, so that playing downward from E with the left hand mimics playing upward from C with the right hand (Google ‘Joe Zawinul inverted keyboard’).

The February 2019 Live column, ‘Step Sequencers’, covers a number of step sequencers, all of which make good sources for inversion. Step Sequencer from the free M4L Big Three Pack is a good place to start: insert it before the Inverter Rack, add an empty chain to the Rack, insert a Pitch effect in that chain and map the Rack’s Range Lowest knob to the Pitch effect’s Range setting. Range Lowest will now split the input between inverted and normal. Insert a polyphonic instrument after the Rack and start the sequencer.

Inversion is also a useful tool for repurposing drum clips. Screen 3 starts with the Azimuth kit and five Azimuth MIDI clips in Live’s Beat Tools Pack. A chain holding a Pitch MIDI effect is added to the Inverter Rack from Screen 2 to allow some incoming MIDI notes (kicks, snares and hi‑hats, for example) to be passed directly to the Drum Rack. Macro knobs have been added to separate the ranges of the Pass Thru and Inverter chains and to mute either chain. 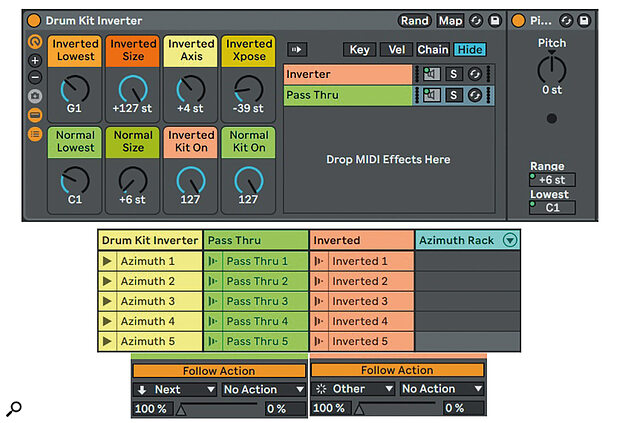 Screen 3: A Pass Thru chain is added to the Inverter Rack from Screen 2 to allow unprocessed and inverted segments of incoming MIDI.

The simplest approach is to insert the Drum Rack after the Drum Kit Inverter Rack, start a clip playing and twiddle the knobs. The settings shown pass the kick, snares, hi‑hat and clap unprocessed and send all other notes through the inverter. The Axis and Xpose knobs control what happens to the inverted notes, letting you shuffle the remaining kit pieces — voice, synth, guitar and sound effects in this case. A more flexible approach is to add a MIDI track to capture each chain’s output and to route the output of those tracks to the drum kit. I’ve done that in Screen 3 and added Follow Actions to the captured clips to produce an ever‑changing drum track. Try the same strategy with audio clips sliced to Drum Racks (dialogue, scat singing, chord progressions, sound effects and so on).