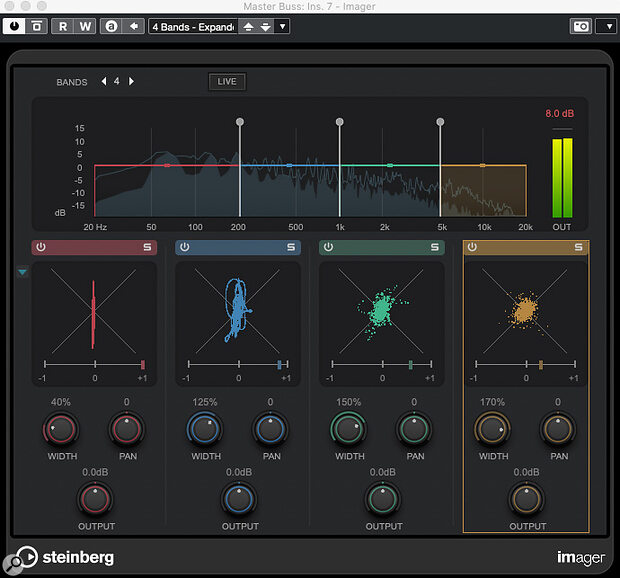 Imager: up to four bands of stereo width control for Pro and Artist users.

We show you how to take full control of your stereo image with Cubase’s powerful bundled plug‑in suite..

Cubase has long included stock plug‑ins for manipulating the stereo image and they all have a role to play, as I’ll explain, but the recently added Imager is particularly interesting. It allows you to process up to four different frequency bands and, as is so often the case with multiband processors, it’s a powerful tool that’s capable of great results in the right context — but it’s also fairly easy to screw things up if you don’t know what you’re doing! In this article, I’ll work through a few examples that show you what Imager has to offer, while noting some of the potential pitfalls. You’ll find some audio files to accompany each example on the SOS website at https://sosm.ag/cubase-1021.

Perhaps Imager’s most obvious application is as a mastering‑style processor, whether used on the stereo mix bus as you put the final touches to a mix, or to tweak a bounced stereo file. The first screenshot shows Imager as inserted in my main stereo bus processing chain, with a typical configuration for this kind of application that serves as a good starting point for exploring Imager’s control set.

I’ve used all four of the available bands here, but three could easily be enough in this context; you can specify the number of bands at the top‑left of the GUI. You can adjust the frequency of the filter crossovers between bands and in this case I’ve gone for 200Hz, 1kHz and 5kHz, to create low, low‑mids, high‑mids and high bands. Each active band has three controls. Leaving the Output and Pan controls untouched for now, I’ve adjusted only the Width in each band. As the control’s name suggests, it manipulates the stereo width of its band, with a value of 100 percent leaving the stereo image unchanged and higher/lower values making the image wider or narrower, respectively.

Moving from low to high, I’ve chosen values of 20, 125, 150 and 170 percent. This keeps kick and bass instruments firmly focused in the centre (generally a good thing) and gradually adds greater Width through the low‑mids, high‑mids and highs. There are no hard and fast rules here; you should judge things by ear. But I’m generally cautious about going beyond 150 percent in any band, as stereo enhancement can potentially produce unwanted side‑effects when the mix is heard on a mono playback system. Having checked the mono playback compatibility (as I describe below), I felt able to push the width a little harder than usual in this case, for a little extra high‑end ‘pop’. 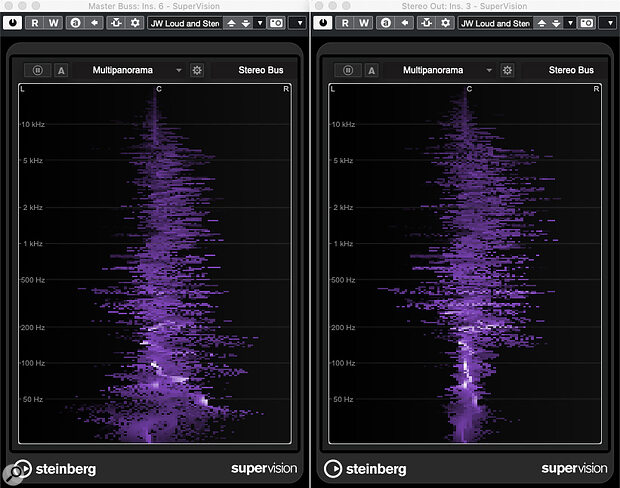 SuperVision’s Multipanorama module before (left) and after (right) Imager’s processing of my worked example.

The screenshot above shows two instances of SuperVision’s Multipanorama module, one before and one after Imager, and these make the narrower lows and wider upper‑mids and highs easily visible. Check out the accompanying audio example — to my ears, the result is a subtle but rather pleasing widening of the stereo image, while the low end is kept nicely focused.

Imager doesn’t have to be used on a full mix; it can be just as useful on individual instruments or subgroups. There are plenty of possibilities, but a few simple suggestions should illustrate the potential.

When you want to help a specific instrument peep out of the mix a little more clearly, Imager can also be a good alternative to a level change. By applying some subtle widening to a specific frequency band or two, you can place the sound more obviously at the edges of the stereo field, which will make it more noticeable to the listener.

For those who are very particular about their reverb treatments, another option is to insert Imager on your reverb’s FX Track. A three‑band approach that narrows the lows (so you don’t get low‑end reverb clogging your stereo image), gently widens the mids, and spreads the highs out wide can be fun to experiment with.

Finally, whether used on an instrument bus or your master bus, automating Imager can be useful in an ‘arrangement/production’ context. Whether by toggling Imager on/off or using automation to adjust key parameters, you can use it to apply a touch of widening to chorus sections, to give them an extra sonic lift. You could even try applying gradually more widening (while ensuring to check for mono compatibility) as the song progresses, to make each chorus feel slightly ‘bigger’ than the last.

While Imager provides plenty of options to adjust the stereo image of a stereo source, it’s not designed to fake a stereo sound from a mono source. Thankfully, the MonoToStereo plug‑in (in Cubase Pro, Artist and Elements) has this task covered, and the audio files include an example based on a mono electric piano recording. As shown in the third screenshot’s second MultiPanorama, GUI MonoToStereo appears to achieve this fakery by applying the well‑established EQ‑based trick of panning narrow EQ ranges of the mono recording to opposite sides to the stereo image.

Faking stereo from a mono piano recording. Moving from left to right, the three Multipanorama displays show (a) the original mono signal, (b) the result of the MonoToStereo plug‑in and (c) combining both MonoToStereo and Imager.

You can use Imager for a particular type of mono‑to‑stereo fakery, though, and mono piano recordings are an obvious candidate. Stereo piano recordings usually convey the natural left/right balance of low to high notes. In a mono recording, you could simulate this effect to some extent by using the Pan controls for each Imager frequency band, panning lower frequencies (notes) to one side of the stereo image and higher frequencies to the opposite side, and use the Output controls to adjust the tonal balance. It’s difficult to get a truly convincing result on an exposed part, but combining MonoToStereo and Imager does have potential if you want to fake both stereo and the left/right note pattern from a mono piano recording that will be used in a busier mix.

Control Room allows you to send the mono output to just one of your monitors...

Checking the mono compatibility of a stereo mix is always informative, but it becomes absolutely essential if you’re using stereo image processing, and widening in particular. Cubase’s Control Room allows you to switch between stereo and mono playback at the click of a button, but this feature is only available to Pro users. Artist and Elements users, then, need an alternative approach, and Stereo Enhancer allows just that. 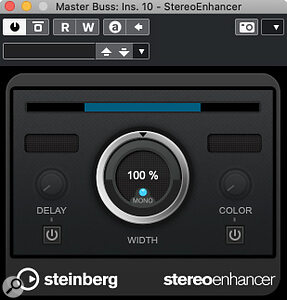 With StereoEnhancer inserted on your master bus and the Mono Compatibility Check button engaged, the plug‑in’s bypass button lets you quickly switch between stereo and mono playback.This plug‑in includes a Mono Compatibility Check button (in the centre of the UI). If you insert an instance of this on your master bus, making sure it’s placed post any stereo image processing, and leave this button switched on (it lights up blue when engaged) you can use Stereo Enhancer’s main bypass button to switch between normal stereo monitoring (plug‑in bypassed) or mono compatibility monitoring (plug‑in engaged). Just remember to have it bypassed when bouncing your mix down to a stereo file!

It’s also worth pointing out that this simple workaround generates a phantom mono signal; you hear the same audio from both speakers, resulting in a ‘phantom’ signal that appears to sit in the centre of the stereo field. This is not quite the same as listening on a single mono speaker, where all sound emanates from the same place — and Control Room allows you to send the mono output to just one of your monitors. Workarounds are possible without Control Room, but I’ll leave that discusion for another time; until then, feel good that phantom mono is better than no mono compatibility check at all!

Finally, a potential drawback of Imager is that it can add some latency. This is not usually such an issue while mixing, but it can easily be distracting in a real‑time recording context if monitoring through Cubase. Thankfully, then, Steinberg have included a LIVE button (top‑centre of Imager’s UI), which engages a zero‑latency mode. It’s at the cost of some processing quality, but the results are certainly good enough if you suddenly find yourself needing to lay down a further live track or two in the middle of your mixing process.