We look at ways to open up your Pro Tools plug‑in world through VST hosting.

Although there has always been a wide range of real‑time, native plug‑ins available in the RTAS and AAX formats used by Pro Tools, there are also many excellent plug‑ins which are available only in the open VST format. The change to Pro Tools 11 has also seen quite a few older plug‑ins drop by the wayside, as they have not been recoded for the new AAX 64‑bit format. But if your favourite plug‑in hasn't yet made it to this format, don't despair; as long as there is a VST version available, there are a number of VST hosting plug‑ins that can be used within Pro Tools — many of which do more besides...

Before we start looking at plug‑ins that are available, let's briefly consider one which isn't. Sugar Bytes released an AAX‑to‑VST wrapper called TransVST, but Avid forced them to withdraw it. Avid's Director of Partnering Programs, Ed Gray, explained: "We do not plan on supporting utilities that convert VST plug‑ins into AAX plug‑ins or load VST plug‑ins directly into the AAX plug‑in menu. For the avoidance of doubt, this means that Avid will not allow an AAX adaptor similar to the VST‑to‑RTAS adaptor offered by FXpansion, and we will uphold our decision not to allow the TransVST product briefly marketed by Sugar Bytes.”

He added, however, that "We remain open to developers providing access to VST processing in Pro Tools if 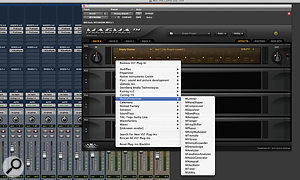 Nomad Factory's Magma provides very comprehensive hosting and routing features. the products make clear in their interfaces that VST plug‑ins are being used as part of an AAX plug‑in. For example, a multi‑effect plug‑in might have a VST plug‑in shell implemented within the user interface and accessible within a separate menu of clearly labelled VST plug‑ins.”

So, in simple terms, a wrapper is something that effectively makes a VST plug‑in look like an AAX plug‑in, and appear within the Pro Tools plug‑in menu. This is how FXpansion's VST‑RTAS wrapper worked in earlier versions of Pro Tools. By contrast, Avid are OK with AAX plug‑ins that host VST plug‑ins in such a way that the VST plug‑in won't appear in the Pro Tools plug‑in menu. In this workshop we'll look at a selection of these hosting plug‑ins, and explore the pros and cons of each to help you choose the one that best suits your needs.

Nomad Factory Magma is a complete suite of plug‑ins that also offers VST hosting of effects, but not instruments. Magma includes 65 of Nomad Factory's own rack effects, as well as the ability to host any plug‑in in VST 1.5 and later formats, as long as they don't require a MIDI input. There are four 'racks' labelled A‑D, each of which can host multiple plug‑ins; the racks can be configured in different series and parallel arrangements. It costs $199.

Vienna VEP5 is also much more than a plug‑in host, but as part of its functionality, it provides Audio Units and VST hosting of both plug‑ins and instruments within Pro Tools 11 and earlier. The integration is almost seamless, with some very clever tricks. For much more on what VE Pro can do, look at the review in the February 2010 issue (http://sosm.ag/feb10-vsl). At €235 (about £200)(about $320), it is the most expensive option under consideration here, but bear in mind that it ships with VSL's Epic Orchestra and can even host plug‑ins and virtual instruments remotely. This is because plug‑ins are hosted in a stand‑alone application, which can run on the same computer or a different computer; the plug‑in itself functions as a conduit between Pro Tools and VEP5. 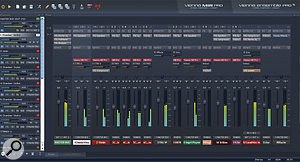 VSL's VEP5 boasts many clever features, including the ability to host plug‑ins remotely. By choosing the correct 'server app' you can have a mix of 32‑bit and 64‑bit versions running, even on the same machine, and both local and remote plug‑ins can be automated within Pro Tools.

The MB7 Mixer is described by Blue Cat Audio as a spectral remixing plug‑in; it uses filters to split incoming audio into as many as seven frequency bands. Each band can then be processed either using the built‑in tools or using VST plug‑ins inserted in up to four insert slots per band — two pre‑fader and two post‑fader. Each band has controls that would normally be found on a mixing console, such as bypass, mute and solo, and you can also adjust each band's gain, stereo width and position in the stereo field. A master mono switch is included that lets you check the mono‑compatibility of the processes you are working with.

MB7 can, of course, be used in single‑band mode for broadband processing, in which case it can be employed as a straightforward VST host, though unlike Magma, it doesn't let you set up parallel processing chains. MB7 can handle MIDI, but requires additional workarounds to support VST Instruments, involving routing an extra MIDI track into it in Pro Tools. 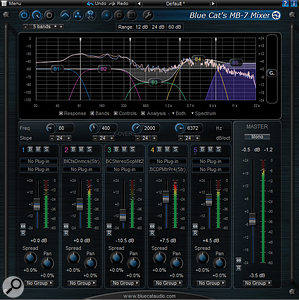 Blue Cat Audio also make PatchWork, a plug‑in patchbay or chainer designed specifically for hosting and routing VST effects and instruments. PatchWork can handle up to 64 VSTs in one instance, and there is an instrument version that lets you use VST Instruments. Up to eight parallel chains can be created, saved, recalled and activated independently, and as they become presets within PatchWork, can be opened in any DAW. Input and output level meters are also included to monitor the signal that is dispatched to inserted plug‑ins.

Blue Cat have worked very hard to overcome some of the limitations of running plug‑ins within a host; plug‑ins hosted by PatchWork can be mapped out so they are visible to Pro Tools, which means they can be automated or controlled with external control surfaces. While Nomad Factory's Magma is a great, easy‑to‑use solution and comes with a large library of additional effects, this mapping feature and support for VST Instruments make PatchWork top of the class for me. Even better, it is the cheapest of the options we are looking at, costing just $79. The Blue Cat plug‑ins will work together, so it is possible to insert an instance of MB7 inside PatchWork and get the best of both worlds.

Although not strictly a hosting plug‑in, the Mac‑only VSTLord is a free hosting solution,

PatchWork not only hosts VST plug‑ins but lets you automate them within Pro Tools. which can be used via an aggregate device to host VST plug‑ins. It was designed as a tool to help developers quickly test their plug‑ins, as its developer claims it is much faster than any other VST host on the Mac OS X platform. Unlike the other options, it's not a hosting plug‑in, but provides a host outside of Pro Tools and then connects it into the Pro Tools world through the Pro Tools Aggregate device; this is fine for non‑HD users, but more of a pain for HD users. Obviously the price of VSTLord makes it unbeatable if funds are tight!