While binaural recording can often involve arcane practices, such as recording sounds using a dummy head with a mic fitted in each ear, or even tiny mics placed in your own ears, you don't need to buy any extra gear to make use of binaural processing when mixing in Logic Pro X. Binaural audio is intended to capture the audio cues that we use to locate sound sources in the space around us, so that a pair of conventional headphones provides a more three-dimensional, immersive listening experience. Without it, headphones actually provide a very unnatural stereo soundstage as the signals fed to the left and right ears are almost completely isolated and separate. That's why many people hear a headphone mix as being 'inside' their head rather than around it.

Our hearing system relies on several factors to locate sounds, and the difference in level between your left and right ears — which is what we achieve with conventional pan pots — is only a part of the story. Regardless of the position of a sound source in a real space, we hear it with both ears, but the sound reaching the ear furthest from the sound source is delayed slightly and is also filtered by the acoustic shadow cast by our head. Conventional headphone listening eliminates this vital cue. A further 'bio EQ' filtering effect takes place due to the shape of the outer ear (or 'pinna'), so the perceived spectrum of the incoming sound changes depending on its angle relative to the ear — an important factor in determining if a sound is directly in front of or behind us. Our brains combine all this information, enabling us to perceive the direction of a sound source without any conscious effort, though small head movements can also help fine-tune localisation. Unless you are using a headphone system with a head position tracker, such as the Waves Nx system, head movements are excluded from the binaural processing as the soundstage moves with you as you turn your head.

The panning mode is selected by clicking on the Stereo Out button at the bottom of each channel strip.Logic Pro X has the ability to take conventional mono or stereo track sources and convert them to a binaural format, by synthesizing the filtering, delay time and head–masking effects that take place when we hear sound naturally. This can never be perfect for all listeners as head size, distance between the ears and the shape of the outer ears gives each of us a slightly different listening experience, but by using average dimensions in its calculations, this type of binaural synthesis can still sound impressively real and certainly more three-dimensional than a straight panned headphone mix.

To set up binaural panning for a track, go to the Stereo Out box in the Inspector window and select Binaural Pan instead of Pan or Balance (see Screen 1 above). You'll see the pan knob change to a tiny binaural panner that on a stereo track shows a wedge shape, indicating both pan direction and stereo width. You'll also see a green dot or puck that can be moved closer to the centre of the circle to make the sound appear closer. On a mono track you see the green distance puck but no wedge, as there's no stereo width to control. While you can set the angle and distance from this control, it is too small to do anything precise — but if you double–click it, a window will appear showing a larger version of the panner plus a few other parameters. Note that the window for a mono track looks similar to the stereo version, but without the stereo spread parameter. 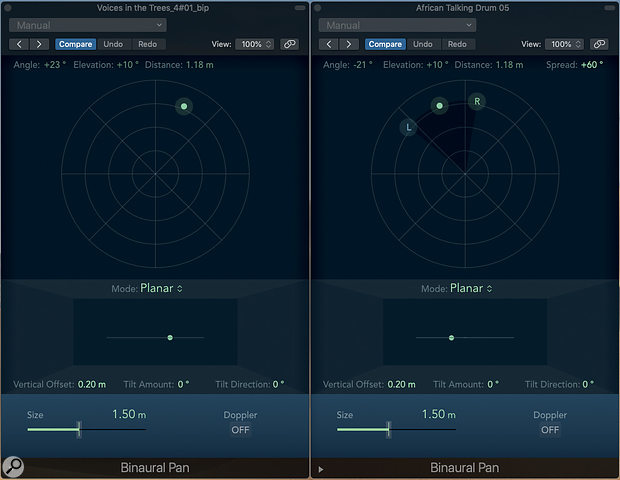 Screen 2: The binaural panning window for a mono (left) and stereo (right) source.

At the top of the screen are readouts for Angle, Elevation, Distance and Spread (for a stereo track). Spread can be adjusted here to change the stereo width, but the other values are purely for information and reflect changes made to the parameters below the panner, specifically Vertical Offset, Tilt Amount, Tilt Direction and Size. Those tilt and offset parameters exist because binaural panning can also reflect the height of the sound source, not just its angle of approach in two dimensions.

For musical use I tend not to use the height (tilt/offset) parameters, but the distance setting is useful. As in real life, the sound gets louder as you move it closer to the ear (centre of the circle), so you may need to compensate for this using level automation if you feel the change in level when moving the sound is too obtrusive. Note that you can now pan sounds to a location behind the listener, though without the ability to incorporate head movement, the effect isn't always totally convincing for static sounds. However, a moving pan that takes sounds from the front to the rear can work, with harmonically rich sounds seeming to work best. You can also adjust the stereo width to make the sound source appear wider or more focussed.

Going Around In Circles 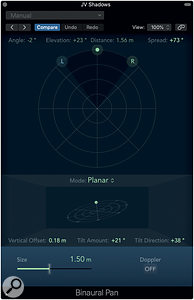 Planar mode allows you to move a source anywhere along a virtual two-dimensional disc.The Mode selector defaults to Planar, which means the panner moves the sound over the surface of an imaginary disc centred at the listener, up to a maximum distance of 20 metres (see screens, above). The vertical offset can raise or lower the disc and it can also be tilted, but it is always two dimensional.

However, if you select Spherical instead of Planar, the sound will move over the surface of an imaginary sphere centred on the listener, and the distance parameter changes the diameter of the sphere (again up to a maximum size of 20 metres). In Sphere mode there is no level change as you pan sounds from front to rear or side to side, as the sound source maintains a constant distance and appears to move up and over the head rather than passing directly through it, as is the case with Planar. 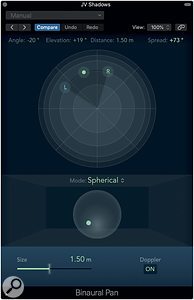 In Spherical mode, sources can be panned three-dimensionally, but at a constant user-selected distance.That leaves the Doppler On/Off parameter. This defaults to off, but if you want to create a more dramatic sense of movement, you can turn it on, in which case the faster the sound is panned past the listener, the stronger the Doppler pitch change. As in real life, a fast–approaching sound will go sharp while a departing sound goes flat. This can be disturbing for musical sources but can work brilliantly for spot effects.

You don't need to do anything different in the main mix bus, and effects can either be left as normal or binaurally placed. That's an artistic decision. Just remember that the more tracks you process binaurally, the less likely it is that the same mix will also work on loudspeakers, so if you are releasing your work publicly, there's an argument for offering both conventional and binaural mixes.

Binaural panning is very effective for making spoken voices sound more intimate as you can position them close to the listener's ear, or even have them whispering over the listener's shoulder.

To demonstrate some of these effects, I've remixed a track by Cydonia Collective called 'Because It's Los Angeles' using binaural panning on all but the main rhythm and bass tracks (you can find it on cydoniacollective.bandcamp.com). This particular tune makes use of processed voices as musical and rhythmic layer elements, as well as including a few spoken phrases. Binaural panning is very effective for making spoken voices sound more intimate as you can position them close to the listener's ear, or even have them whispering over the listener's shoulder. Some of the more washy sounds have been treated to slow binaural pans, all of which can be automated in the usual way, while others have been given static positions using the binaural panner. The spoken–word sections have also been placed using binaural panning, and I felt this made a useful difference to the mix perspective.

As mentioned earlier, everybody's mileage will vary depending on how different their head and ear measurements are from the average setting used in the software, but for me, the stereo width seems wider and more three-dimensional than traditional stereo, although the front-to-back perspective still doesn't seem quite as deep as in real life. Nevertheless, switching back to a regular panned headphone mix definitely loses something. Because I used conventional panning for the main rhythmic and bass musical elements this mix still works on loudspeakers, so I think there is scope for using binaural processing for creating mixes that work on both speakers and headphones, as long as you are selective in where you apply it. And as all the necessary tools are available in Logic Pro X, it costs nothing to give it a go.