As of version 12.2, all Pro Tools users now get powerful features like VCA Master tracks, Advanced Metering and the Disk Cache.

Last month we looked at the previously HD-only features that were made available to all users in Pro Tools 12.1, such as track input monitoring, AFL and PFL solo modes and Copy To Send, as well as some changes in the Pro Tools Preferences. The more recent version 12.2 brings another batch of formerly HD-exclusive goodies to everyone, including VCA Master tracks, Disk Cache and Advanced Metering. 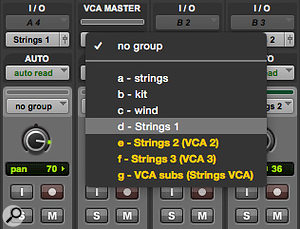 A VCA Master track can be assigned to any pre-existing Mix Group.

VCA Master tracks emulate the operation of voltage-controlled amplifier faders on analogue consoles, where a VCA channel fader would be used to control, group or offset the signal levels of a group of other channels on the console. I was working in live sound when VCA faders came on the scene, and they were a revelation: using a VCA group was, in effect, the same as getting my hands on a bank of channels and moving their faders all at once — and because I was controlling the channel faders, the post-fade send levels to processors and reverbs would also go up and down properly. By contrast, when you use a subgroup (auxiliary input in Pro Tools) fader to adjust the level of multiple sources, any send levels from the source tracks stay the same, so as you fade the group down, the sound gets wetter.

As VCA Master tracks do not pass audio, they do not have inputs, outputs, inserts or sends. A Mix Group is assigned to a VCA Master track, which appears in the VCA track’s Assignment selector. The controls of the tracks in that group, called the slave tracks, are modified by the controls on the VCA Master.

When you select VCA Master in the New Track dialogue, the only choice you have is whether it should be sample- or tick-based. After hitting Create, you will have an unassigned VCA Master track in the mixer, and when you click on the button that initially reads ‘no group’, you will be able to assign it to any pre-existing group. If none are suitable, you will need to create a new Mix Group first. In the session shown in the screens, I already have groups created for each of the Strings sections, so I just needed to select the appropriate group (group ‘d’). At this point two things will happen: the VCA Master fader will display an indicator near the top of the fader to show which group it’s controlling, and the group will be identified as a VCA group in the Group list in the bottom left-hand corner of the Edit and Mix windows.

The Groups list in the Mix and Edit windows tells you which groups have VCA Masters assigned to them.

As you can see in the screens, I recorded three ‘passes’ of my strings section. I’ve assigned each pass to its own VCA master, and there’s a further VCA Master for all my strings tracks. Moving the respective VCA fader will adjust the level of all the faders in that group, so I can use the first three VCA Masters to adjust the balance of my strings sections, and the Strings Master VCA to adjust the overall strings level. Be aware, though, that the level meter on the VCA Master track doesn’t show the sum of the slave tracks: rather it shows the level of the loudest track in the group.

In this session, I’m using separate VCA Masters for each of three passes of my strings section, plus a fourth to control the overall strings level in the mix.

One benefit of using VCA groups rather than conventional groups is that you no longer need to hold down a modifier key to change just one fader within a group: you are free to adjust their levels individually. However, the same cannot be said about the automation. It is possible to move an individual track’s fader and even write automation on an individual track, but impossible to create it manually by editing the volume graph directly or to edit fader moves after recording automation. As soon as you attempt to edit the automation like this, anchors get placed on the other tracks within the group.

If you prefer, though, you can turn off these alternative group functions and make a VCA group function like a normal Mix Group. In the Mixing tab of the Pro Tools Preferences window, there is an option called Standard VCA Logic for Group Attributes. Deselecting this option means that VCA groups function more like conventional groups: so, for example, hitting a slave track’s solo button makes the solo buttons on all the slave tracks come on. 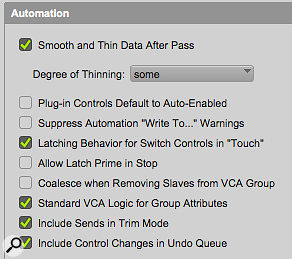 By default, Mix Groups under VCA Master control behave differently, but you can revert to standard behaviour in the Preferences.

Note that there were a couple of VCA Master-related bugs in the initial Pro Tools 12.2 release. VCA levels were incorrectly coalesced to the mix group and Session Notes displayed “This version of PT does not support VCA masters” when a session using VCAs was opened in the standard version of Pro Tools. The 12.2.1 release seems to have resolved these issues, so do make sure you are running the latest version. You can do this by checking in your Avid Application Manager that you have the current version of Pro Tools.

With the introduction of Pro Tools 12.2, it is now possible to use Disk Cache on the standard version of Pro Tools. Disk Cache enables Pro Tools to load media files from the session into RAM from whatever drive you have the session on. This means that it becomes possible to run sessions on drives that otherwise would not be able to handle Pro Tools projects, including network attached storage. Pro Tools prioritises files closest to the current playhead position. This way, as soon as you start playback, those files should already be cached into your RAM for playback. This is especially useful when working with shared media storage.

The Cache Size setting in the Playback Engine determines the amount of memory the Avid Audio Engine (AAE) allocates to pre-load audio for playback and recording. Avid recommend the default setting of Normal as the optimum Cache Size for most sessions. To work out how much of your RAM would be available for the Disk Cache, Pro Tools asks the computer how much RAM is installed and then subtracts 4GB. For example, if your computer has 12GB of RAM installed, the total amount of RAM available for the Disk Cache would be 8GB.

Pro Tools HD users have long been able to change metering ballistics and scales to match specific needs, whereas users of the standard version of Pro Tools had limited metering choices. Some broadcasters, post-production houses and mixing and mastering facilities use these Advanced Metering options to match the metering on various external consoles or other devices. For example the BBC have used their own PPM standard for many years, so when Pro Tools 11 came out, the option to choose BBC PPM as one of the options in Advanced Metering was very welcome.

As of version 12.2, all Meter Types and Advanced Meter Type settings (see box) are available with the standard Pro Tools software, including gain-reduction meters. You are not constrained to the preset settings: in the Metering tab of the Pro Tools Preferences window, you can adjust parameters including decay rate and depth, the reference point, integration time, and where the colours will change on the meter display. This enables you to personalise the metering in Pro Tools to suit your preferences exactly. 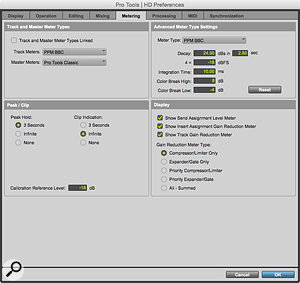 I hope these last two workshops have been helpful for users of the normal version. Once you get to grips with these previously HD-only features, you might wonder how you ever managed without them!