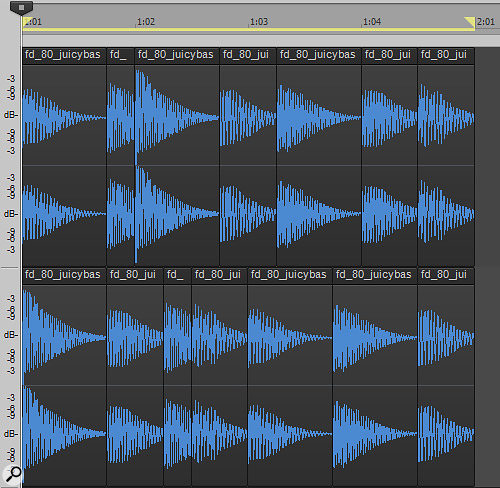 The top file is the original; the bottom one has been rearranged into something familiar, yet different.

Cakewalk has some powerful tools for working with REX clips.

Although Cakewalk's native loop format is the Groove Clip (aka 'Acidized') file, it can also import REX files so that they look like Groove Clips. This makes possible some tricks that are difficult, or even impossible, with traditional REX files. This month I'll talk you through some of my favourite REX file tips.

First, a little background: REX files work by slicing a file's rhythmic components into separate pieces of audio (a slice when the kick hits, another when the snare hits, another when snare and hi-hat hit at the same time, and so on), and associating each slice with a MIDI note. When you speed up or slow down the tempo, the MIDI notes move with the timeline, triggering the slices at the desired rhythm regardless of tempo.

One of the best features of REX files is that by moving the MIDI notes around, you can alter the clip's arrangement of slices. Rapture, Rapture Pro, Dimension Pro, and RXP Player would extract these MIDI files, which you could drag into a MIDI track. Although Cakewalk doesn't include these instruments, there is a way to move REX file slices around — and the results can often deliver better fidelity than the MIDI-based approach. The following also works with standard Groove Clips. However, note that this gives the desired results only if the REX editing was done correctly. There must be a marker for every major transient in the file: drum hits, bass notes and the like (we'll cover how to fix improperly edited REX files later).

2. Load a REX file, and set the tempo as desired.

3. With the REX file selected, place the Now time at the clip's beginning.

4. Hit Tab, then type S to isolate the first slice.

5. Continue hitting Tab, then typing S, until the file has been separated into individual slices.

6. Bounce each slice to itself so it's no longer associated with the original clip.

7. Move them around to create variations on the original file.

The reason why this can give better fidelity than rearranging using MIDI notes is that when you slow down a standard REX file, there can be gaps between the slices. Because the REX file imports as a Groove Clip, stretching occurs that helps cover over these gaps when you cut the file into slices, and then bounce each slice to itself.

The ability to extract the individual slices from REX files opens up additional possibilities. Instead of rearranging them, select all the slices, then apply a fade-out to the longest slice and drag it all the way to the left to create a highly percussive sound from all the slices. This works with anything you can cut into discrete slices — drums, bass, rhythm guitar, whatever. Like all other REX-related tricks, this is most effective with REX files that have been edited well. 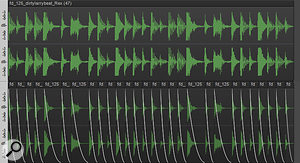 Layering a sliced file with its unsliced version and varying the attack creates a latency- and artifact-free transient shaper.This next trick builds on the previous two techniques to create an ultra-flexible transient shaper for drum parts. Really! In some ways, it's more flexible than a bona fide transient shaper plug-in.

1. Load your REX drum or percussion loop (or bass loop, for that matter) into an audio track.

2. Duplicate the clip: Shift+Ctrl-drag it to another audio track, or into a blank space in the track view. Or, right-click on the Add Track button to the immediate left of the timeline and tick 'Events', but don't tick 'Link to Original Clip(s)'.

Now you have the original drum loop, and the same loop cut into slices. To emphasise the transient, follow the fade-out/shorten percussive technique given earlier, so that all the slices in the duplicated track have sharp decays. I recommend using the Fast curve, because this makes the sound even more percussive.

You can now vary the duplicated track's level to adjust the amount of transient emphasis. It's quite uncanny how this can bring out the transients without either artifacts or latency. Note that unlike rearranging REX clips, not only is it not necessary to bounce the slices to themselves, but not doing so means that both the original and duplicated tracks will follow tempo changes if needed. 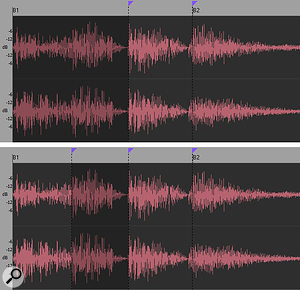 The first slice in the top waveform has two distinct sounds. A transient marker in the lower waveform indicates the start of the second sound.As mentioned previously, for REX files to stretch properly there needs to be a transient marker for every major transient. If not, the more you alter the tempo, the more the rhythm will sound 'off'. Here's how to fix files that weren't edited properly.

1. Right-click on the clip, and choose View / Loop Construction.

2. From the Loop Construction window, choose Clip / Save Loop. This converts the imported REX file, whose transient markers can't be edited, to a true Groove Clip.

3. Import the loop you saved into Cakewalk, and repeat step 1.

4. Going from left to right, click on each slice. Each slice should be a single sound.

5. If a slice has more than one distinct sound, add a transient marker at the start of any additional sounds by double-clicking with the Smart tool, just below the window's header. (Double-clicking just above the waveform changes the calibration from measures/beats to samples.)

6. Listen back to the two slices to make sure each has a distinct sound.

The slice will now play back at the correct rhythm when you change the tempo.

2. Right-click on the clip, and choose View / Loop Construction.

The REX loop will now conform to the project pitch (as set under Project / Set Default Groove Clip Pitch, which matches the song's key), and obey any of the Groove Clip pitch transposition markers on the timeline.

Here's something I don't think you can do with any other program that supports REX files: turn the slices into steps for a step sequencer. Each step can have a different level, pan position and pitch.

1. Load the REX file into CbB.

2. Right-click on the clip, and choose View / Loop Construction.

3. Click on the Slice tab, and choose which envelopes you want to show or hide.

4. Each envelope for each slice will have a line. Drag up or down to change the default value (defaults are no gain, pan in centre, and no pitch change).

Gain varies from +12dB down to -∞ (off). Pan goes from fully left to fully right, and pitch covers ±24 semitones. Note that before you do any edits, the pan and pitch envelopes both default to centre, so you'll need to hide the pan envelope to see the Pitch envelope so you can edit it.

This is an exceptionally valuable feature for creating variations in drum loops — dropping out a slice or two in various iterations can keep the loop sounding fresh. Because these changes become part of the loop, if you roll out the REX file, or copy/paste it, the variations you added remain intact. Given that many REX files slice drum loops at 16th notes, the kind of variations you can add are not quite limitless, but it feels that way sometimes.

You can take this one step further by saving the clip as a Groove Clip, opening it, and adding transient markers to create additional slices which you can then edit in the same way.

If you don't enable the Pitch button in the Loop Construction view, you can change a drum loop's timbre by editing the values in the semitone or cents fields (to the right of the Pitch button and its drop-down menu). Raising the timbre gives more of a beatbox sound, while tuning down makes the drums big and corpulent. Some of the major benefits happen when you layer a drum loop with a detuned version of itself — try it!