Avid's Complete Production Toolkit effectively bridges the gap between HDX and native Pro Tools systems. We look at what you get for your money.

The Complete Production Toolkit is an option for Pro Tools 10 that expands the software to include almost all of the features found in Pro Tools HD software. It gives you the same high Pro Tools HD track counts, full session compatibility, VCA groups, surround mixing and advanced tools, without requiring you to go to the expense of buying HDX or HD Native hardware.

Even LE systems have always been able to open sessions created on other Pro Tools rigs, but there are limitations, and these are especially obvious if you're working in surround. If you tried to open a surround session in non-HD Pro Tools 10 without the Complete Toolkit, you'd see a Session Notes warning, and when you clicked OK, the session would load, but none of the surround tracks would appear, while the mono and stereo tracks would be greyed out if they were routed to surround buses, as these aren't available in the basic PT10. 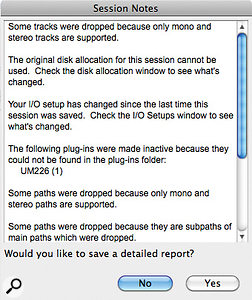 When you try to open a surround session in the basic Pro Tools 10, you'll be warned that it isn't compatible. 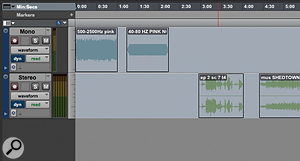 In these screens you can see what happens to my surround session (top) when I open it in Pro Tools 10 (below): the surround track is missing, and the other tracks are greyed out, because they are routed to surround buses. 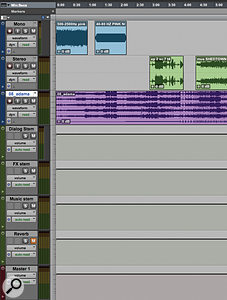 So if, for example, you wanted to work on a surround session away from the studio on your laptop, you'd need the Complete Production Toolkit. You would also need some way of monitoring the surround mix, but, thankfully, that doesn't mean you need to carry your multi-output interface with you. You can use the new Down Mixer plug-in to down-mix your Surround output so you can monitor in stereo, which is great if you need to do some editing on your surround tracks while you are on the train or waiting for a plane. 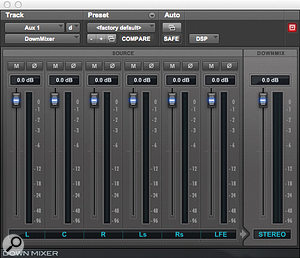 The Down Mixer plug-in makes it possible to monitor surround sessions on a stereo playback device. The addition of Complete Production Toolkit thus gives you complete session compatibility with HD users.

Cache In The Attic

The addition of Complete Production Toolkit to Pro Tools 10 also adds many more tracks. The simultaneous audio playback track count goes from 96 up to 256, while the maximum number of audio tracks in your session goes up from 256 to 768, the number of instrument tracks goes up from 64 to 128, and the number of video tracks goes up from one to 64, enabling you to take on the most complex projects. Obviously, you need the storage capacity to handle these track counts — but another feature, the Extended Disk Cache, means that you don't need racks of very-high-speed drives to be able to play it all at once.

As long as you have plenty of memory in your computer, the Extended Disk Cache lets Pro Tools HD and Pro Tools with Complete Production Toolkit load audio files used in Pro Tools sessions into RAM for cached playback. Pro Tools prioritises files closest to the current playhead location and loads these first into the RAM cache. This way, when you start playback, those files are already cached and ready to go. This is especially useful when you're working with shared media on a variety of types of network-attached storage.

The Cache Size setting in the Playback Engine dialogue determines the amount of memory Pro Tools allocates to pre-buffer audio for playback and recording. You can leave it on the default setting of Normal, as Avid have designed this to be the optimum Cache Size for most sessions. To calculate this value, Pro Tools checks how much RAM you have in your computer and subtracts 3GB for Mac systems or 4GB for Windows systems. For example, if your computer has 12GB of RAM installed, the total amount of RAM available for the Disk Cache will be 9GB (Mac) or 8GB (Windows). If you're not happy with the Normal allocation, you can revise it to leave more RAM available for other tasks.

Pro Tools HD provides two meters in the System Usage window for monitoring the Disk Cache: Disk Cache and Timeline Cached. However, these meters only show up if you move away from the Normal Cache setting and enter a fixed setting in the Playback Engine dialogue. As the session loads, you will see the Timeline Cache load first, and then the Disk Cache. As you'd expect, the Disk Cache display shows how much of the allocated disk cache is filled. For example, if the Cache Size in the Playback Engine is set to 1GB and a session contains 250MB of audio files, the Disk Cache meter reads 25 percent. If all of the audio in the session is cached (including files in the Clip List that are not on the timeline), the Disk Cache meter appears green.

The System Usage window reports on the status of Disk and Timeline caching.

All of this means that you can run Pro Tools sessions from a wide variety of media that might not otherwise be suitable, including network-attached storage. However, depending on the bandwidth of the network and the size of the session, it may take some time to load the session into the RAM cache, and, of course, it is only temporary storage. If you have to close the session and re-open it, you will have to wait for it all to load into the RAM Cache again — although, because Pro Tools starts with the files closest to the playhead, you should be able to get started and leave it to load the rest in the background.

Two of the most important features added by the Complete Production Toolkit have been explained in detail in previous Pro Tools workshops, so I'll only mention them here, and refer you to back issues for more detail. VCA groups permit you to get another 'layer' of gain control over groups that already have automation, and you can solo and mute channels within a VCA group without affecting the other tracks, enabling you to work faster and more easily with grouped items. We looked at how to use VCA groups in detail in the September 2008 issue of Sound On Sound (/sos/sep08/articles/vcagroups.htm).

As I mentioned when talking about session compatibility, another of the major benefits the Complete Production Toolkit brings to PT10 is that you can work beyond mono and stereo tracks through 5.1 and up to 7.1 surround mixes, and use multi-channel tracks up to 7.1. You can monitor surround mixes directly through the outputs of your preferred audio interface, or use the Down Mixer plug-in included in Pro Tools 10 software to monitor surround sound in stereo. We covered some of the basics of surround in Pro Tools in the April 2006 issue of Sound On Sound (/sos/apr06/articles/ptworkshop_0406.htm).

Finally, there are a number of smaller features that Complete Production Toolkit brings to PT10, which HD users perhaps take for granted, but can be very useful. One such is the Scrub Trim tool, which combines the function of scrubbing with the Trim tool, making it easier to locate the in and out edit points on a clip across up to two tracks. 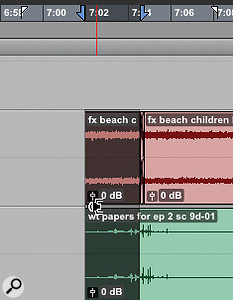 The Scrub Trim tool lets you easily locate the wanted audio within a clip and trim it at the same time.You will find the Scrub Trim tool in the Trim tool options. Note that the Scrub Trim tool changes into a 'right trim' or 'left trim' shape as it is placed over the right or left side of a clip, just as the normal Trim tool does. Scrubbed audio is routed through the track signal path, so you hear any effects in the signal path. This is really useful when working to picture, since as you Scrub Trim the audio, the video will follow the cursor. I forget how much I use this until I am on a non-HD PT10 system and it isn't there! To scrub-trim two tracks simultaneously, drag with the Scrub Trim tool between adjacent tracks. To scrub with finer resolution and not have to zoom in, hold Ctrl (Windows) or Command (Mac) while scrubbing.

The Complete Production Toolkit also adds two further Edit Window Scrolling options in the Options menu, called Continuous Scrolling and Centre Playhead. In both of these modes, the playhead or cursor remains static, while the clips scroll past it. This does use more processing power than the other modes, however.

Track input monitoring is another one of those features I really miss when I'm using a 'normal' PT10 rig. On each mixer channel and track, you will see an additional button with an 'I' in it, which allows you to enable input monitoring on that track. As I always Bounce To Track to write mixes, it's great to be able to click this button to monitor what is going to disk.

As you will see from the comparison chart on Avid's site (www.avid.com/US/products/complete-production-toolkit#specifications), the Complete Production Toolkit brings a huge number of features to Pro Tools 10 — so many, in fact, that I haven't been able to cover all of them in this article. There are, for example, a number of additional features relating to automation, including snapshot automation, which can be invaluable in some circumstances. So although the Complete Production Toolkit isn't cheap, at £1559$1999, it can nevertheless be very cost-effective.