The Long Way Round 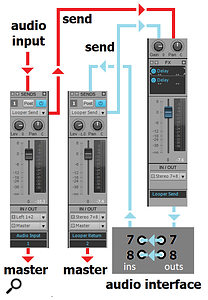 This schematic of the looper routing shows how to create a feedback loop within Sonar by using bussing and external patching with an audio interface.

Loopers, such as those made by Roland, DigiTech, Pigtronix and others, apply feedback to long delays so that playing into them can give atmospheric, ambient effects, or serve as a way to set up a groove where you lay down overdub after overdub. You can use Sonar's Sonitus:fx Delay as a looper with up to four seconds of delay by turning up the feedback far enough to hear a continuing series of repeats.

Although Sonar doesn't have any processors that provide longer delay times, with a little creative patching — and an audio interface with a spare set of stereo outputs and inputs — it's possible to set up loops with delays that extend way beyond four seconds.

Before getting into the details, we need to cover routing. The Audio Input track provides the audio source, and terminates in the master bus.

The Audio Input track includes a send to a bus we'll call the Looper Send Bus. This bus is where you insert delays in series, set for delayed sound only and no feedback, to lengthen the delay time. The bus's output terminates in audio interface outputs seven and eight, which patch through physical patch cords into inputs seven and eight.

A second audio track, called Looper Feedback Return, has its inputs assigned to audio interface inputs seven and eight. This track serves as a loop return channel that picks up the delayed signal, then feeds it to the master bus so we can hear the delay.

But the key element to turning this into a looper is feedback, which is created by inserting a Send into the Looper Feedback Return audio track, and assigning its output to the Looper Send bus. This produces a feedback path (shown in blue in my signal flow diagram) so that the delayed signal recirculates through the feedback loop. 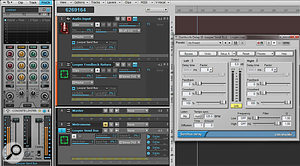 Here's our looper, as seen in Track view. Note that four delays are stacked in the Looper Send Bus to give a total delay time of 4 x 3.840 seconds: 15.360 seconds.

Now let's translate this technique to a Sonar project.

Your looper is now complete.

It's important to avoid runaway feedback. Your 'panic button' is the Looper Feedback Return track's Input Echo button; turning this off silences the audio and flushes the delays. Another option is enabling Mute in the Looper Send Bus. This silences the looped audio, but doesn't flush the existing delayed audio. When you disable Mute, the delayed audio returns unless Mute was enabled for more than the total delay time.

The object of most looping applications is to get as close as possible to 100-percent feedback. With lower settings, the repeats will fade out eventually, while exceeding 100 percent will cause runaway feedback. Set the levels on the audio interface's spare audio inputs to unity gain. Although you can compensate for level differences elsewhere in the looper, it's best to try to start off with a system whose overall gain is as close to unity as possible. 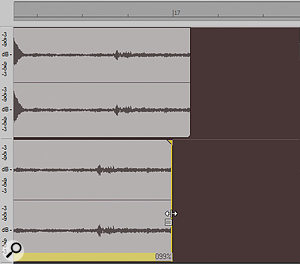 The lower track is a copy of the original looped material in the upper track, but has been shortened to compensate for the added latency and now matches the project tempo.

Ideally, you'd like to be able to record your audio into Sonar and sync the looping to Sonar's tempo; the Sonitus:fx Delays have tempo sync, so it would seem that wouldn't be a problem. Unfortunately, although we can now have really long loops, the sync will be thrown off because of the latency caused by the looped signal doing a round-trip through the interface. So if, for example, there's 5ms of latency, after 10 passes the timing would be off by 50ms, which is definitely noticeable.

However, the loop often starts off as being 'self-contained' without concern about other tracks, so the main reason you need sync-to-tempo is if you're playing something rhythmic and want to be able to monitor a metronome. Fortunately, with today's low-latency interfaces and drivers, I've found you can at least do a pass or two while listening to the metronome as you establish the loop's rhythm. You can then turn off the metronome before any drift becomes significant, and follow the rhythm already established by the loop.

If you then need to have the loop fall into place with a project, you first need to render the track, but the usual track bounce won't work for this. Instead, record enable the Looper Feedback Return track and start playback, so this track will then contain the looped audio. You will probably need to adjust the start time. I find it's a good idea, when recording any loop, to have a 1-2-3-4 audible count-in on the track. That lets you line up the beginning of the loop with the song's beginning.

The easiest way I've found to match tempo is to line up the start-point properly, count the number of measures in the looped material, then compare where the audio ends in relation to the timeline. In the screenshot, the looped audio is exactly 16 measures, but note that it ends later than the start of measure 17, due to the added latency. Hover the mouse over the right edge as if you're going to slip-edit the track to make it shorter, but hold down the Ctrl key to stretch the clip as you shorten it to the correct length. When you stretch this way, you'll hear a preview algorithm when you play back the audio. To use a high-quality off-line processing algorithm:

The clip will now bounce to itself using the Radius Mix stretch algorithm. Play the audio against the metronome to verify that the looped audio now syncs to the project.

For the adventurous, this setup is ripe for tweaking. One trick that's not available with standard loopers is the ability to create internal delays within the main delay. You can do this by turning up the feedback slider within one or more delay processors. Also note that, with the Sonitus:fx Delay, you can set different delay factors in the right and left channels, as well as add Crossfeed between the two channels. The only caution is that the more internal feedback you add, the greater the probability of runaway feedback. Be ready to turn down the Looper Send Bus send level in the Looper Feedback Return track!

It may seem like a lot of effort to get the looper up and running, but you can save a 'looper' project as a template, and then all you need to do is some extra patching. You can create some pretty amazing textures with this technique: build up choirs with a single voice, do ambient patterns, or create bizarre sound effects. And if you play guitar and have an e-Bow, you're in for a real treat…