Even complex audio recordings can be conformed to Studio One’s timeline — with very useful results.

Most DAWs contain features that allow freely recorded audio to be adjusted to fit to a strict tempo. However, while conforming a recorded four-bar groove or a 16-bar solo to a timeline is typically a cakewalk, it becomes more of a challenge with longer pieces — especially if they vary from a straight 4/4 time signature or a single tempo. Nevertheless, it is possible, and in this month’s Studio One workshop I’ll show you how I achieved it with a particularly challenging project.

The piece in question was a live, two-track recording made by 11:11, an early jam band of mine from the mid-’90s. Called ‘Hole In Mariah’, it spends seven minutes travelling from 4/4 through sections in 5/8 and 6/8, throwing in a few transition measures in 3/8, and ending up back in 4/4. Not exactly four on the floor, even in the 4/4 sections. Nevertheless, I wanted to conform the live recording to a sequence laid out with the song form, as a preliminary to several sessions reuniting 11:11 to make good recordings of a few of the band’s best pieces. Doing so would enable us to rehearse the material before the recording sessions, then record into the same song document.

Studio One provides ample facilities for conforming audio to the timeline, but a piece like this requires extra attention and more steps. In my favour were the fact that the pulse stayed the same through all of the song’s changes in mood as well as structure — that is, an eighth note was the same duration in 4/4 and 5/8 — and the discovery that the tempo in the performance was surprisingly consistent, if less than perfect. Though I have conformed audio to sequences many times before, I found this experience instructional and thought you, dear reader, might as well.

Screen 1: The song form is charted, including all time-signature changes. Note that bar counts are used, rather than bar numbers, because the start of the song will be offset from the start of the session document.

The first step was creating the song form in a Studio One Song document. I sat down with the recording and an Excel spreadsheet, listened through the song, and generated a chart of the form. The spreadsheet (Screen 1) had columns for time signature, number of bars, and comments, in which I described each section, for instance, ‘verse 1’, ‘chorus 1’ or ‘short 5/8 reprise’.

I translated the song form map into Studio One by dropping markers at the start of each section. I left two bars blank at the start of the session to have room to work with, and so that when I rerecorded the song I could start before the song’s downbeat. I placed the Start marker at the location where the music actually began, replacing an Intro marker. When I came to a time-signature change, I entered it into the time ruler before dropping the section change marker, because inserting time-signature changes sometimes altered measure numbers (I’m not really sure why). Once all markers were placed, I played through the whole song and double-checked against the chart because of the importance of the song form being correct in the document. A misplaced time-signature change would totally throw things off during rehearsal, let alone recording.

It was time to import the recording. If the recording is not at the same sample rate as the song document, Studio One will attempt to perform real-time sample-rate conversion, which could get messy later when time-correcting the recording; in this case, I knew the recording file to be at the same sample rate as the document and simply dragged it into the song, creating a new stereo track with one big event, then set the track’s tempo mode to Don’t Follow so it would not be affected by the document’s tempo. I trimmed the event start to the first note, which fell on the downbeat in this song. Engaging the Snap function with the quantise value set to an eighth note, I dragged the trimmed recording to begin at the Start marker at bar 3.

The document was prepared, the recording was imported. I went to work.

I chopped the whole song into the sections defined in the chart. As I went, I counted measures in each section to once again verify the marker layout matched the song form. I also renamed each event (which took the name of the source file as a default) to indicate the section it contained. Good housekeeping preserves sanity and serenity.

The actual chopping was achieved by turning Snap off, listening to find a section change, zooming in, placing the cursor at the appropriate point (checking a few times to be sure it was right), using Alt-X to make the cut, then zooming out to continue to the next section change.

It is important to note that it is not necessary for every section event to start on a downbeat. In this particular track there were vocal pickups to each verse, and I thought it best to keep each with the rest of the section following it. To make this work, however, I had to note where in the bar the pickups started, in this case on the eighth note immediately preceding the downbeat. If the tempo is not steady, either by design or just because the performance was, um, exciting, then you will want to define smaller chunks of the song as ‘sections’. A recording with a lot of tempo variation will require a lot more events in Studio One to work out well. That’s more of a pain, but less so than struggling with trying to fit tempo-wobbly events to a rigid sequence tempo.

With the whole song cut into separate events, I now wanted to line each event up to its corresponding section marker. In my experience, live performances are far more often a tad fast than a mite slow, so section changes in my recording generally came a little too early. This suggests sliding the sections into place working from the last to the first as an efficient method.

Screen 2: The cut-up, renamed events have been lined up to start at the correct places in the song form. The space between the events shows the difference between the stated and actual tempos. Note the markers denoting the form.

To move each section in place, I turned Snap on and dragged until the section started in the right spot (see Screen 2).For the verses of ‘Hole In Mariah’, I dragged the verse events to start on the upbeat to the bar, rather than the downbeat; for sections starting right on a downbeat I could drag the event right to the beat. An alternate method when a pickup is not so conveniently rhythmic is to turn Snap off and drag until the downbeat of the bar in the waveform lines up visually with the section-change marker so that the main part of the section starts right on the downbeat.

Even though the performance tempo had been quite consistent, some sections of ‘Hole In Mariah’ ended as much as a whole bar short, so time-correction was clearly called for in order to conform the song to the sequence. Using Studio One’s automatic time-correction features, detecting transients and time-correcting each event to fit as desired would be the easy way to do this. However, that doesn’t work well enough with a fully mixed live recording of a complex tune with sometimes ornate playing. 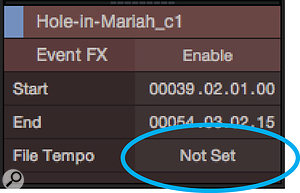 Screen 3: If your file contains time-signature or tempo variation then be sure to Alt-drag and not Command+Alt-drag, or a single file tempo will be set, which messes with all events made from the file.

Fortunately, it’s easy to do the time-correction manually. With the tempo mode of the track set to Timestretch and Snap enabled, I went to the end of each section and Alt-dragged the edge to the next section boundary (remember that my sections all ended a little early). Using Command+Alt-drag (Windows: Ctrl+Alt-drag) would do the same thing and calculate a tempo as well, enabling automatic time-correction. But that wouldn’t have worked in this case, because the tempo is calculated for the entire source file, and any changes to tempo after that affect all events made from that file equally. That defeats the idea of correcting each event separately, so I did not calculate a file tempo (Screen 3), even though the whole song was at the same tempo.

Well, almost the same tempo. The 5/8 section actually sped up just a little, and after conforming it to the same tempo as the rest of the song I realised that it needed to be a bit faster to feel right. So I added a tempo change in Studio One just for that section before I time-corrected it.

Screen 4: Finished. Time-signature changes are in the ruler at the top, song form markers are below, the tempo change is visible in the Tempo track, the time-corrected events in the track below (note the sprocket icon in the lower left corner, indicating the event has been time-stretched). The click track is at the bottom. The ‘mel cues’ track has single notes placed at key section changes to give me aural cues when I’m working just to the click track.

With the entire song conformed and the whole song form mapped out, my last step was to turn on the click, open the Click Preferences dialogue, and click the Render button. I chose to render from the beginning of the timeline to the End marker, which I’d placed after the last note faded out. Printing the click rather than running it live would allow me to remove it from rubato sections or anywhere else it wasn’t desirable. Screen 4shows the finished session. Having the click allows me to practice along with the recording until I feel confident I have the part and the arrangement, then switch over to practising with just the click, which is how I intend to record.

Conforming a timeline to recorded audio is similar: simple for straightforward pieces of music, more work for complex recordings. It takes more steps to conform complex music, but with a bit of persistence and care you can get useful song maps from almost anything that’s worth mapping!