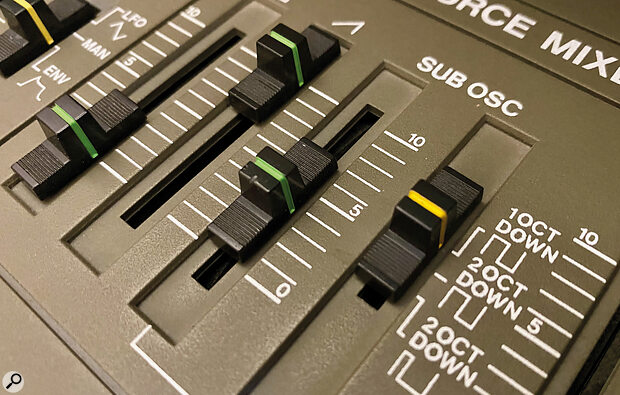 Make your mixes easier by getting the bass right from the start.

When it comes to contemporary production, it’s safe to say that one of the most troublesome areas to get absolutely right is the bass. This bizarrely simple, yet seemingly complicated, instrument can cause no end of trouble for many producers, so we’re going to look at useful ways to utilise the power of the synth bass, by navigating those choppy deep‑bass waters!

From Wood To Chips

Speaking traditionally, basses tend to come in two shapes or sizes; it all started with the double bass, which is a purely acoustic instrument, hosting four strings stretched along the length of a large wooden, hollow body. Double basses are normally associated with orchestral or soundtrack music, where a massed section of basses will create acoustic volume. The double bass is also heavily associated with jazz, where the use of a mic or pickup for amplification purposes assists in keeping the volume of a double bass in‑line with other instruments within a jazz combo, such as drum kit or electric pianos and guitars.

It’s partly the desire for greater volume that resulted in the development of the electric bass guitar; this instrument normally adopts a solid wood body, with inbuilt pickups, much like a regular electric guitar. In line with their guitar brethren, electric basses also require amplification, making them perfect for band work.

However, the undeniable rise of the synth bass as a viable alternative to its string‑based cousins, extends back to its increase in popularity in the early ’70s, spurred on by diverse jazz‑fusion pioneers such as Herbie Hancock and Stevie Wonder, and the electronic pioneers from Europe. The synth bass is more prevalent than ever in contemporary production, but in something of a shape‑shifting form.

Before we get on to styling our own synth bass sounds, it’s important to consider the role of the bass, in production terms. This will most likely be informed by the style of music you are making, but there is one undeniable point, which is pivotal, yet easily overlooked.

The primary role of the bass part, in just about all mainstream music, is to shore‑up and solidify the harmony found within your song, track or composition. Thinking of your bass as the foundation to your track’s harmonic content will create a far more coherent construct, and from this the production elements will hopefully flow. You can argue that there is far more to bass than this, as the relationship between bass and drums within a rhythmic dialogue can inform the overall groove of a track. This is certainly true of ’70s funk right the way through to contemporary EDM. Slightly surprising then that when legendary bass player Jaco Pastorious was asked who composed the funkiest bass lines, he replied JS Bach, and he wasn’t being sarcastic! The elaborate harmonies found in the music of Bach’s Baroque era laid the groundwork for what we do today, it’s just that they didn’t have compressors to hand to keep levels in check!

The double bass can be notoriously difficult to work with as an instrument, both to record and mix; it’s one of the reasons why it’s collected the moniker ‘trouble bass’, but actually the problem is not really the bass itself, it’s more about the wealth of literal and subliminal frequencies offered by its complex makeup. If you ever have the opportunity to hear a double bass in person, take time to get your ear up‑close and personal. You will be overwhelmed by the sheer amount of low‑frequency content, much of which is in the sub‑strata of the frequency range. This creates a problem when working with even the most decent pair of studio monitors, as they often do not extend low enough to reveal the true identity of the bass picture. As a double bass‑playing friend of mine once said, you can remove an awful lot of low‑end frequency from a double bass, and it will still sound very much like the instrument at hand. This is because the sound of the bass also contains plenty of midrange frequencies.

Thankfully, the synth bass is a little more simplistic, so let’s take a look at a couple of examples for mainstream production styles.

When it comes to contemporary production, it’s safe to say that one of the most troublesome areas to get absolutely right is the bass.

Let’s begin by creating a synth bass from scratch that will be useful for a number of commercial production settings, from pop to R&B and beyond. There are many hardware and software synths that will perform in this arena, so pick one that you understand, which offers two oscillators and two envelope generators. The concept will be transferable from one device or soft synth to another.

For our example we’re going to work with the ES‑2, which forms part of the Logic Pro X package. Initialise the patch setting from the ES‑2 drop‑down menu. This will reduce the patch to a single oscillator reproducing a square wave via oscillator 1. Change this initial tone to a sawtooth; this will immediately throw open a richer tone, although it’s worth mentioning that square wave bass sounds have been popular in the past, for certain styles of Garage and hip hop.

Now activate oscillator 2; we’re going to create a sub‑oscillator tone, but this time we will want to use a square wave. We’ll also need to drop the pitch of oscillator 2 by one octave, and blend it into our sound using the mixer. The ES‑2 employs a triangular‑shaped mixer, which blends the three available oscillators together. As we are only using two at this time, aim for a mix of around 2/3rds oscillator 1, to a 1/3rd oscillator 2.

As you play around with the blend between both oscillators, you’ll notice that oscillator 1 can quickly become overwhelmed by oscillator 2. Think of oscillator 1 as our main fundamental pitch, while the lower timbre from oscillator 2 adds that subliminal quality. If you think back to our double bass analogy, oscillator 2 is providing that rich sub‑strata, which we can control later with compression.

The ES‑2 offers a dual filter option, however we are currently only hearing the filter on the left, which is set to a low‑pass, 2‑pole/12dB mode. These settings are ideal for our purpose, so it’s time to reduce the cutoff frequency to eliminate some of the high‑end content. This will have the effect of immediately focusing our sound to something more akin to the bass that we want. 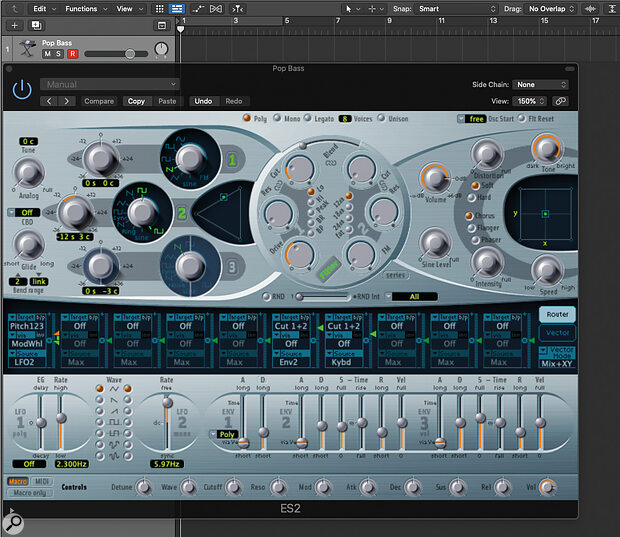 Screen 1. Pop basses need to punch above their low‑end frequency weight, and utilising the envelope control of the filter will allow you to engage just the right amount.

Having two envelope generators at our disposal allows one to be applied to the amplitude (or volume) element of our sound, which is a fairly universal concept, while the second envelope can be applied to the cutoff control of the filter. This allows us to shape the envelopes to form a degree of ‘bite’ at the front of each note played. This creates a mimicking effect of the sound of a finger or plectrum plucking a string on a stringed bass, but will have the added bonus of supplying punch and attack to your bass sound, which will help at the mixing stage.

If we look at our example (Screen 1), envelope 2 is directed to the filter cutoff, while envelope 3 maintains control of volume. In both instances the attack time is immediate, the decay time is fairly quick and the sustain level is low. This creates the instantly gratifying sound of a bright attack, with a slightly muted sustain, making it ideal to sit alongside the drums in your track; you’ll hear the front‑end attack clearly, but the perpetual sustain will stay out of the way.

Clearly, all of these elements can be tweaked to suit your track and production style, but it is no coincidence that this basic concept draws influence from both conventional basses and the much applauded synths sounds of yesteryear. From the MiniMoog to the Roland SH‑101 (which offered a bona‑fide sub‑oscillator), this influence extends to latter‑day classics such as the Novation Bass Station.

While pop is all about punch, a slightly different synth‑bass context has risen from the murky depths of music with a cinematic calling.

Have you ever compared the mixing styles of cinematic soundtracks across different franchised films? Take the original Star Wars trilogy (episodes 4‑6) and you’ll hear the amazing work of legendary composer John Williams. His compositions are heavy on orchestral scoring, with memorable ear‑worms associated with each character in the film. Think Darth Vader and most of us will have that fantastic brass‑based march echoing around our heads. Those groundbreaking scores featured the London Symphony Orchestra in a setting which is considered pretty traditional, at least by classical standards.

Fast‑forward 20 years and film‑going audiences were being treated to new styles of cinema, featuring more elaborate sound systems, making use of enormous PA‑style sub‑woofers. These units extended the range of the cinematic soundtrack, descending to ever lower frequency points. The new breed of film composer, led by the likes of Hans Zimmer, gave rise to the principal of supporting your film score in the bottom end with a sub‑synth. Heavily filtered and bristling with low‑end rumble, these sounds provided the cinematic foundation to the soundtrack, bolstering the double bass section, and that’s part of the reason that the basses tend to sound as loud as they do in modern cinemas. The loud and low frequencies create excitement at a volume that rumbles right through your torso just as the starship is hurtling uncontrollably to earth (spoiler — the engines start and everyone is saved!).

This sub‑cinematic concept is no longer the preserve of the big screen; it has infiltrated the wider production psyche, enveloping artists such as Nils Frahm, Max Richter or Jon Hopkins, as well as music for television and video games. 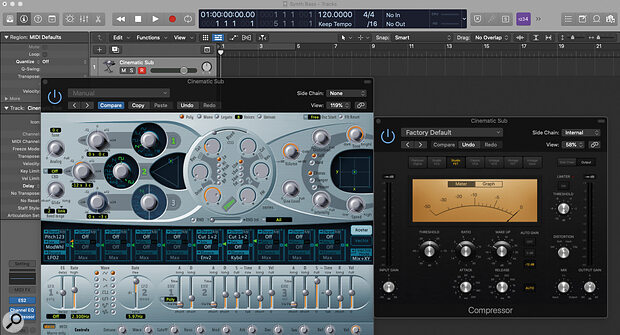 Screen 2. Cinematic sub‑basses have migrated from screen to mainstream. The word ‘Sub’ could almost translate to subliminal!

Unlike our previous pop synth bass with punch, we want to go polar opposite, with plenty of sustain and heavy filtration. The up‑front oscillators remain the same (Screen 2), but we will reduce the filter cutoff amount to create a less colourful overall tone. It’s also important to eliminate the envelope 2 setting, which controls the cutoff frequency. We simply don’t need the bite that we required for pop.

An important part of the cinematic bass armoury is distortion and compression. The ES‑2 is helpfully equipped with an overdrive element within the filter section, which will help bolster the bottom end further. While any overdrive or distortion plug‑in will add to your construct, a favoured distortion plug‑in beckons from SoundToys in the shape of Decapitator. It provides numerous distortion colours, many of which are ideal counterparts for cinematic deployment. The addition of compression is also invaluable, and again there are favoured models to explore. The Urei 1176 compressor has long been considered a classic, with many companies modelling their version of the compressor. Logic Pro X is equipped with a model described as the Studio FET compressor, which similarly doffs its cap to the 1176. Apart from keeping these levels under control, the FET‑style compressors introduce even more low‑end colour, sounding tasteful and rich in context.

Adding the perfect bass to any track need not be stressful, particularly if you understand how to style the sound yourself. One final thought: it can be difficult to get the full picture of a mix, and this is where modern headphones with their over‑extended bottom‑end reproduction can offer a litmus test, alongside more usual monitoring scenarios. Another useful test can be to listen to your mix from the threshold of your studio. If there’s too much boom in the room the chances are you’ll have too much bass in your track; time to tame those low‑end frequencies!