In my SOS November 2013 Cubase workshop, I explained how those of us with less-than-stellar piano-playing skills can play a harmonically correct MIDI chord performance using Cubase’s Chord Track. But what if you just need some melody or bass line assistance? Well, there are some unsung heroes amongst Cubase’s bundled MIDI plug-ins... 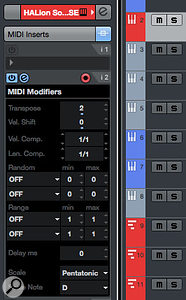 Don’t overlook the humble MIDI plug-ins that are bundled with Cubase — MIDI Modifier in particular can be a powerful tool.Each MIDI/Instrument track’s Track Inspector has a MIDI Modifier section, which allows you to modify your MIDI data in various ways, whether the data is real-time (as you play) or played back from a MIDI clip. There are some useful options, including transpose up/down in semitones, velocity adjustment and random (but constrained) manipulation of note parameters such as pitch, position, velocity and length. Cubase Artist and Pro also include a separate MIDI Modifier plug-in, and while this offers very similar functionality to the Track Inspector, there are some differences. One feature, Transpose To Scale, is required for our ‘keyboard assistant’. It’s super-easy to use: just select the root note of the key and then one of the scale types from the list.

With your key/scale selection made, any MIDI note data will automatically be checked against the chosen key/scale combination and, if required, corrected to ‘fit’. You can now close your eyes and bash away at your MIDI keyboard — whatever notes you press, Cubase ensures everything remains harmonically correct. It won’t guarantee you a melody to die for, but there will be fewer duff notes!

The Transpose To Scale option comes with a huge selection of preset scale types — although no user-defined scale option is included.Another trick that might appeal is re-mapping the notes of your chosen key/scale to the white keys of your MIDI keyboard, for ease of playing. Having made your key/scale selection, simply adjust the MIDI Modifier’s Transpose setting up/down (either by trial and error or by working out the number of steps required) to settings that get the majority of the notes mapped onto white keys. As a simple example, if a song is in Bb major, the scale contains Bb, C, D, Eb, F, G and A. If we set a Transpose value of -2, Bb notes will actually be played on the C key and Eb on the F key. All the other notes are also transposed by two semitones, but they remain on white keys. This can be made to work for many common scales, including major, harmonic minor and pentatonic, although some (eg. the melodic minor) will have one or two ‘correct’ notes mapped to a black key. With Transpose To Scale active, though, the plug-in will pitch-correct for you if your fingers miss the occasional black key.

If music theory isn’t your strong suit, trial and error with the Transpose function is easy enough. But it would be brilliant if Steinberg were to add some sort of keyboard graphic to the MIDI Modifier plug-in to give a visual cue of the notes in the chosen key/scale you’ve mapped across the keyboard — and then see how they shifted as you adjusted the Transpose value. (If you agree, why not add a request for this on the Steinberg forum?)

Another neat feature is the MIDI Modifier’s Record Output To Track button (red when enabled). With this active, the MIDI notes Cubase records are the modified notes produced by the plug-in, which is useful because if you need to do any editing, the note pitches you see in the piano-roll are the ‘corrected’ ones. If you leave this inactive, the ‘raw’ notes are recorded, but the MIDI Modifier will still correct them on playback. If you choose to have this option active while recording, make sure you bypass the MIDI Modifier on playback, or its settings will be applied for a second time — which is obviously not what you want!

There are some other things that the non-specialist piano keyboard hacker might like to do but which aren’t currently possible via the MIDI Modifier plug-in. These include the creation of custom scales and control over the direction of the pitch-correction for out-of-key notes. However, if these are things you would like to be able to do, Cubase Artist and Pro have another MIDI plug-in that can help, called Chorder.

The Chorder plug-in doesn’t have to be used for chords — you can also use it to re-map notes for complex scales, or create custom scales.

I looked at the primary function of this useful little plug-in (building custom chord voicings that can be triggered via a single MIDI note) way back in SOS April 2010, so feel free to read that if you need a quick refresher. It takes a little more effort to configure than the MIDI Modifier options I’ve described above with this plug-in, but it can also be put to good use as a piano keyboard assistant for melody/bass line creation.

The screenshot shows a simple example where I wanted to play white notes (easy for my poorly trained fingers) but to get the seven scale notes of D major (D, E, F#, G, A, B and C#). Note that I’ve selected the One Octave and Single Mode settings. This means that I only have to define my required key mapping for a single octave (it’s then applied across all other octaves) and that I’m not prompted for multiple mappings for different velocity layers (useful when defining full chord voicings but not for our single-note melody application).

The task is then simple — as you select a note on the lower mini-keyboard graphic, click the Learn button, and then select the note from the upper, stripped, area that you want to ‘map’ to your selected note below (to map a chord, you’d select multiple notes in the upper zone). Once a note on the mini-keyboard zone has a mapping applied, a pale blue highlight appears above it. Repeat the process as many times as required for all the notes in your desired scale, and if it contains seven or fewer notes, you can map everything to the white keys for ease of playing. Once the mapping is complete, play away, and the Chorder plug-in will remap your white-key noodling to the programmed scale.

The above process does require you to know what notes are in your target key/scale combination, but if that’s a problem, then you can always consult Google. Two further things are also worth noting. First, when you start playing, if you happen to hit a MIDI key that you’ve not mapped, then no MIDI note will be generated (so no duff notes). Second, if you think it’s an advantage, you can choose to map these ‘empty’ keys as duplicate notes within the required scale. This is what the MIDI Modifier plug-in does, but with Chorder you get to control the mapping and whether ‘wrong’ notes are pitch-corrected up or down. The other option, which I quite like, is to map these empty notes to the root (and perhaps the fourth interval) of the scale. With this configuration, if you did hit a ‘wrong’ key, then your melody gets a root (or fourth) added — as ‘wrong’ notes go, this makes for some pretty solid melodic choices! 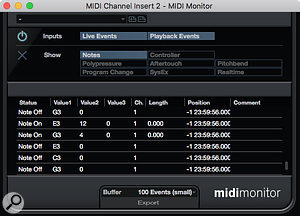 If all this note re-mapping gets a little confusing, the MIDI Monitor plug-in can be a useful troubleshooting tool.This last idea is corrective, but can also be considered ‘creative’ — you can use such mappings to place emphasis on certain scale notes, no matter how random your actual keyboard playing might be. There are other tools in the Cubase MIDI plug-in suite, in particular the Density and Transformer plug-ins (the latter is a real-time version of the Logical Editor and provides an alternative means to access the Transpose To Scale feature), that can apply a creative touch to your melody/bass line construction. Indeed, these might make a good subject for a future column...

Let’s finish with a mention of the MIDI Monitor plug-in. This provides you with a simple window to monitor all MIDI data generated by a MIDI track. This includes note values, so if your attempts to map from one scale to another are leaving you scratching your head then a pair of MIDI Monitors (one instance before MIDI Modifier and one after) can be a useful troubleshooting tool.

Most of us would love to be better at playing the piano keyboard, and it’s still worth working to improve such performance skills. But in the meantime, whatever your current skill level, the suggestions above will at least allow your melodies and bass lines to stay in tune — and leave you free to focus on the creative side of things.