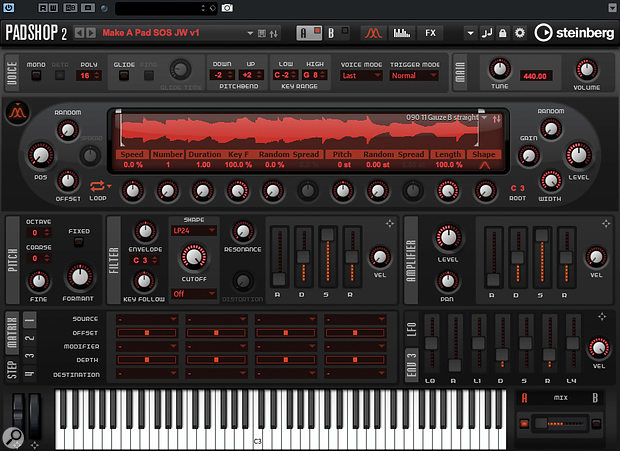 Padshop 2's Granular Oscillator, with layer A set to its initial state and a sample dragged and dropped. Ready to commence pad creation!

Cubase's Padshop has always seemed to me to be something of a hidden gem, but with the Cubase Artist/Pro v10.5 update this granular synth was treated to a significant overhaul. Where once we had only a 'lite' version of Padshop, we now get the full version of Padshop 2 (which is available as a paid product for users of other DAWs). Padshop 2 still includes its predecessor's dual-layer (A and B) engine, the Grain Oscillator, flexible filter, modulation options and effects, and all this is contained in a refreshed, yet still familiar GUI. However, it also boasts an expanded preset and bundled sample collection, drag-and-drop support for your own samples in Cubase, improved sound modulation, additional filter options, an integrated arpeggiator/phrase player (which will be familiar if you use Retrologue) and a new Spectral Oscillator.

The original grain oscillator and the new spectral oscillator make Padshop 2 an intriguing option for sound creation, but they might be unfamiliar concepts to many taking their first steps in DIY sound creation. I hope to take a detailed look at the Spectral Oscillator in a future column, but this month and next I'll do my best to nudge you along the learning curve for the Grain Oscillator, by looking at the creation of pad/soundscape-style patches.

Padshop 2's new Spectral Oscillator provides some very different sound-creation options, which I'll explore in a column in the near-future.

If granular synthesis is an alien concept, Simon Price's article in SOS December 2005 (https://sosm.ag/dec05-granular-synthesis) is an excellent overview. In essence, grain-based audio processing involves dividing your audio sample into tiny sections (each a fraction of a second) called 'grains'. It's rather like beat-slicing but done on a micro-scale: if the individual grains are played back in sequence at the original speed and pitch, you simply hear the original sample, but grains can also be played back individually, sequenced in original order, sequenced out of original order, looped, re-pitched, filtered and reversed; multiple grains can be played simultaneously, different grains can be used on the left and right sides of the stereo image and, well, you get the idea.

There are all sorts of options and combinations, which mean that granular synthesis makes it possible to create entirely new sounds in which the original sound source is unrecognisable. Its potential for original sound design is huge — and you need nothing more than Padshop's Grain Oscillator to get started.

To begin our introductory tour of pad creation using Padshop's Grain Oscillator, start by: (1) ensuring only layer A is active (turn off layer B via its power button, located bottom-right); (2) selecting the Grain Oscillator in layer A (the button located top-left of the oscillator panel lets you toggle between the grain and spectral oscillators); and (3) ensuring that layer A is reset to its initial state (use the drop-down menu towards the right side of the Plugin Functions section, which is the topmost tool strip).

Having 'blanked' layer A, rather than choosing one of the preset samples, you can use one of v2's most significant new features: you can drag and drop one of your own samples (mono or stereo) into the Grain Oscillator. This can be done from various locations, including the Project window, but for the example illustrated here I dragged a sample of a sustained guitar chord from my OS's file browser. If original sounds are what you want, starting with your own unique sound source is obviously a good plan, but almost any sound can provide something useful.

No Pain, All Grain

Tweaks to the number of grains, their relative starting position and the playback speed produce timbral changes, but not always a very musical result.

If you now play a few MIDI notes into Padshop the odds are that you'll hear a very static sound, albeit one that's pitch-mapped across the keyboard. So while the sound will change in timbre as you move the playhead position, you'll need to twiddle a few more knobs to create something more pad-like.

A decent first step is to tweak the Speed knob. When you play and hold a MIDI note, this setting controls the speed and direction in which the playback head moves through the grains from the starting position. At 0 percent (the default value on initialising the settings), the playback position is static (the same grain is played repeatedly), hence our currently rather bland sound. But you can set the Speed between -200 and +200 percent. At +100 percent, the playback speed sequences the grains at their original tempo, and you hear something approximating the original sample. Well, sort of, depending on the MIDI note you play and the Shape setting (which creates different crossfade styles to smooth the transition between grains), amongst other things.

Negative Speed values move the playhead backwards through the original sample, and they can produce some interesting, often unsettling, effects. In this case, I opted for a Speed of +6 percent and the 'Welch' Shape setting, but what's 'best' will almost always depend on the nature of the original sample and what sort of result you want; there are no magic numbers to share!

Granular synthesis makes it possible to create entirely new sounds, in which the original sound source is unrecognisable.

It Takes Two (Or More)

Next, try: (a) increasing the number of grains being played at any one time; and (b) ensuring that each grain uses a subtly (or perhaps not so subtly) different playback start position. The Number setting can be adjusted to a maximum of eight, but even values of two or three (used in my example) will have a noticeable impact on the sound. To the left of the waveform section, adjust the Position Spread control (I opted for 10 percent) so that each grain starts from a different point around the playback head. These adjustments should add greater complexity/richness to the sound.

To add further sonic variation, you can also adjust the Random Position and Position Channel Offset controls. The former injects some randomness to the start position of each grain, while the latter applies start position differences between the left and right channels, to enhance the stereo width. In the example, I dialled in 10 percent for both. (By the way, it's also worth noting that Padshop always creates left and right channels, even from mono samples.)

My Grain Oscillator configuration is complete: it's the core of a pad sound — but the filter, modulation and effects options can help to make this patch sound much less 'static'.

By this stage, the sound can easily be one in which it's impossible to identify the original sample — but it may be as much 'noise' as 'musical', and in most cases, you can shift the balance towards the latter by experimenting with the Duration setting. This adjusts the length (duration) of each individual grain, and it influences the timbre of the sound and the pitched elements. With lower values (shorter grains), pitch is dominated by the frequency at which the grains repeat, while at larger values (longer grains; I've used 50), pitch elements from the underlying sample tend to dominate.

You may also need to experiment with the Duration Key Follow setting. This interacts with the Duration setting, with shorter Duration values generally requiring higher Key Follow values (and visa-versa) so that pitch is mapped in a conventional fashion across the MIDI note range. As a guide, start at 100 percent (which worked fine in my example) and then switch to 0 percent. See which feels most natural, and adjust to taste from there.

Provided you're using more than one grain, perhaps the last initial setting to tweak before digging into the modulation options should be the Pitch Interval. If this is set anywhere other than zero, grains are randomly played either at their original pitch or at the specified pitch interval. Certain values (eg. a fifth) produce more obviously musical results, but the -12 semitone setting I used here is always a good bet; it adds a little low-end depth and richness to almost any sound.

With sufficient tweaking of the Grain Oscillator controls that I've described above — and, as always, a little luck — you'll hopefully now have created a pad-like sound of your own. But while it could well be usable, chances are that you'll feel it could be made somewhat more interesting and engaging!

That's where Padshop 2's filter, effects and modulation options come in, and is where we'll resume our look at Padshop 2 next time. In the meantime, I've created an audio example below that demonstrates the various stages of my pad's development, from original sample through to my final Grain Oscillator tweaks. I've included an example of how this sound can then be enhanced with the filter, effects and modulation options, so you can get an idea of where we're headed next.

The audio example is split into seven short sections.