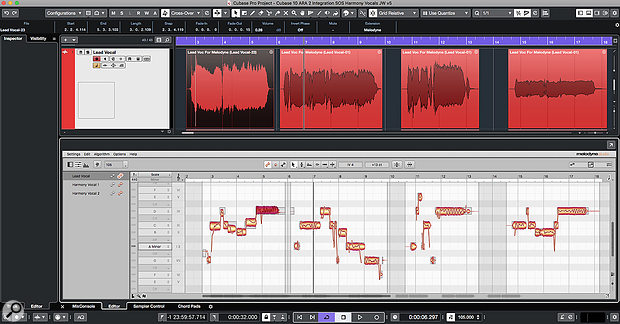 With ARA 2, Melodyne can be just another part of Cubase...

When Cubase Pro 10 was released, Steinberg also announced that support for the Audio Random Access 2 (ARA 2) plug-in format would follow soon, and June 2019's free v10.0.30 update delivered it. A few plug-ins now support ARA (Celemony Melodyne, Synchro Arts Revoice Pro and Vocalign, and — recently acquired by Steinberg — SpectraLayers), but the format is Celemony's creation — so this month I'll consider how ARA 2 might improve the workflow of anyone using both Cubase Pro 10 and Melodyne.

Previously, Cubase users could already insert Melodyne as a VST plug-in, and you still can work that way. But that approach requires an initial 'transfer' of audio data into the Melodyne plug-in before you can make pitch/timing changes in Melodyne, and those changes aren't updated in the waveform in Cubase — so if you try to perform editing of said audio on the Cubase timeline, those changes are not made to the audio in Melodyne unless/until you repeat the transfer process. So it's essential with this VST approach that you adhere very carefully to a certain workflow.

ARA 2 overcomes these problems, and it all feels much more deeply integrated — which it is! To access this new ARA 2 connectivity, you'll need Melodyne v4.2.2 (or later) installed. Select the audio clip(s) you wish to process in Melodyne, go to Audio / Extensions on the main menu, and select Melodyne. (You can unload the Melodyne Extension in the same fashion.) Alternatively, depending on what details you've set Cubase to display in the main Project Window's Info Line, you can load/unload Melodyne via an Extensions option here. After some very brief behind-the-scenes analysis, Melodyne's editor opens in Cubase's Lower Zone — complete with its usual menus, editing options and note blobs ready for action.

Four things are worth noting at this stage. First, while the Melodyne Extension is active, you can't access the usual Cubase Sample Editor options (including VariAudio and AudioWarp). Second, the Extension (Melodyne in this instance) is pre any conventional VST insert plug-ins in the signal path. Third, as with any Lower Zone editor, you can float the Melodyne plug-in window if you prefer. Fourth, a Compare button on the left side of the Melodyne toolbar allows you to toggle between the original audio and the 'Melodyned' version, making it easy to check whether your changes are for the better.

The actual editing tools available are the same as in the VST version of Melodyne. As we've reviewed Melodyne on a number of occasions (most recently v4 in SOS February 2016: https://sosm.ag/celemony-melodyne-4) I'll not describe all that here; instead, I'll focus on the significant workflow advantages that ARA 2 brings to the table.

A very welcome change is that Cubase and Melodyne now communicate with each other in a much more integrated way as you perform edits. For example, if you move, or adjust the length of, an audio clip on the Cubase timeline, those changes are immediately reflected in Melodyne. Equally welcome is that the cursor display in Melodyne doesn't just reflect the cursor position in Cubase's Project Window — it can be used to adjust the playback position of Cubase in real-time. It might seem a small behaviour difference, but it really does make working with Melodyne much more efficient. 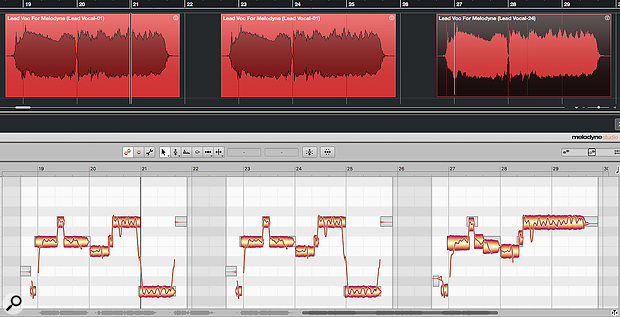 Melodyne editing is sync'ed between copies of the same audio clip (as in the first two clips shown here), but you can break that link if you want to perform clip-specific editing (as in the third clip, where the Melodyne Extension has been unloaded and then reloaded).

The Melodyne Extension can be used to process multiple clips on a single audio track simultaneously. Usefully, the Melodyne toolbar now includes buttons (located top-centre) to toggle between 'track mode' (the two–blob icon) or 'clip mode' (single–blob icon). In the former mode, Melodyne displays all clips on the current Cubase track which have the Extension applied, whereas in the latter it shows only the currently selected clip.

Cubase and Melodyne now communicate with each other in a much more integrated way as you perform edits.

The handling of audio clips that have been copied is interesting. If, for example, you've copied a vocal performance from one chorus section to another and apply the Melodyne Extension to both, or duplicate a clip to which the Extension has already been applied, Melodyne editing for the two clips is linked — as you edit one clip, the edits automatically apply to any copies. You won't want exactly the same vocal performance in every chorus, of course, but this could be a big timesaver for some tasks — especially when working on elements such as oft-repeated backing vocals.

All Melodyne's editing features are retained under ARA 2, including the option to display blobs for multiple tracks in the editor, for easy reference while editing.

Should you decide you need to undo some of your changes, the Melodyne editor window includes the usual options for resetting any edits. And if you remove the Melodyne Extension from an audio clip, all of your Melodyne edits will disappear, returning your Cubase clip to its original state. If you want to lock your edits in place (for example, to unload Melodyne to save resources), a quick Render In Place prior to unloading the Extension will achieve that.

A further welcome change is in how Melodyne's data is handled by ARA 2: the data is now saved within your Cubase project. This is different from how the VST plug-in (which uses a dedicated folder elsewhere in your file system) behaves, and should make project transfer and archival much easier.

It's also worth noting that two of Melodyne's key features are present and correct via ARA 2 in Cubase. First, the option to overlay blobs from multiple tracks in the editor's display via the track list on the left side of the window. The blobs of the currently selected clip are shown in the usual orange, and others appear in grey. This provides an incredibly useful visual reference, particularly when editing things like vocal doubles or harmonies.

Second, assuming you have the full version of Melodyne, the audio miracle that is polyphonic audio editing is possible. Success with things like pitch adjustments in polyphonic audio is highly dependent on the nature of your audio source and its role within the mix. ARA 2 integration doesn't change that, but as with monophonic sources such as a lead vocal, it does streamline the editing process, thus allowing you to determine what's possible quickly and easily.

So far, so good, but there are a few teething issues and limitations. First, it's worth mentioning one VariAudio feature that ARA 2 doesn't make possible via Melodyne: its note blobs cannot be made to 'follow' the Chord Track. (Well, at least not yet... how cool would that be?).

Steinberg hope to improve their ARA 2 implementation in the next update, with support for clip-level fade/volume envelopes and Lane-based comping.

Currently, Cubase's ARA 2 implementation doesn't support comping via the Track Lanes system. You can activate the Melodyne Extension, but on playback you'll hear a mix of audio from all Lanes simultaneously, rather than just your comp. The simple workflow solution is to comp and render to a new track before applying Melodyne. But there are sometimes merits to pitch correcting while comping.

There's been some chatter on the Steinberg Forums concerning the occasional bit of odd behaviour. For example, users have reported problems when working with 64-bit audio, and with playback of 'Melodyned' audio losing sync with the project. On my own system, though, I didn't experience any obvious gremlins, though I did note that fades/volume adjustments applied to clips in Cubase's Project Window seem to be ignored while the Melodyne Extension is active.

But all that said, ARA 2 is already a huge step forward for regular users of Melodyne and Cubase Pro 10 — Melodyne now feels like part of the in-house Cubase editing system rather than a plug-in. And while the ARA 2 implementation might not yet be quite fully formed, Steinberg have indicated that there's more to come, and that the next update (v10.0.40) should resolve the Lanes workflow as well as some of the reported issues.