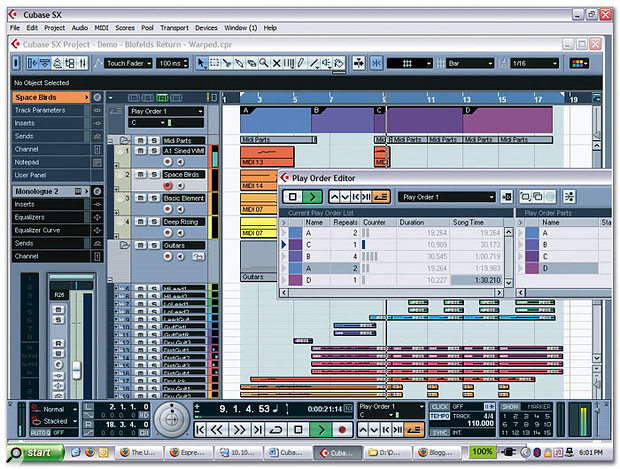 Version 3 of Cubase SX maintains the visual style of its predecessor but includes a number of welcome changes, such as the ability to see the colour assigned to a track, viewing of the Sections for a VST Instrument Channel below the Sections in the Inspector for the corresponding MIDI track, and a smaller 'smallest' height for tracks. Notice also the Play Order Editor, which allows you to specify an order for the defined Play Order Parts when a Project is played back.

This month we provide an exclusive preview of the new version of Cubase, SX 3, and offer advice on how to get the most out of Cubase 's Range Selection tool.

The big news in the Cubase community by the time you're reading this month's column will be Steinberg's announcement of Cubase SX 3, the first major revision to Cubase SX since, well, Cubase SX 2 last summer. But seriously, SX 3 is a very significant update to the application, and, in many ways, is a bigger step forward for Cubase users than last year's update to SX, mainly due to the fact that the emphasis in the new feature set is on musically creative functions. There are also a great many bug fixes and workflow improvements that are especially gratifying to see, as a few stem from a year's worth of campaigning the good people at Steinberg on behalf of a film composer of my acquaintance who uses Cubase and Nuendo.

If you were exhausted by the bad jokes that could be associated with the Time Warp tool introduced in SX 2 (and covered a couple of months back in Cubase Notes), you'll be pleased at the prospect of more warp-related puns in SX 3, courtesy of the new Audio Warping feature. Audio Warping essentially brings Acid-, Live- or Soundtrack-like functionality into Cubase, for real-time timestretching and pitch-shifting of audio, which includes the ability to import Acid loops, opening up a vast library of content for SX users. The feature works in a similar way to the current method of creating hitpoints for slicing up audio, except that once you have identified the rhythm of an Audio Event with so-called Warp Tabs, you can either drag these to timestretch the audio, or have Cubase use them to adapt the tempo of the audio to match the Project during playback. As I mentioned earlier, this all happens in real time and enables the audio to follow even the most eccentric of tempo changes — including ramps.

For those who enjoyed the days of pattern-based sequencers, before the current linear graphical arrange windows came into vogue, Play Order Tracks will be especially welcome, and certainly rank among my favourite new features. A Play Order Track is a new track type that allows you to define regions within your arrangement (called Play Order Parts), which you can then specify to play in a certain order, rather than have your Project play back linearly from bar one to the end. This is a very powerful arranging feature that's great for trying out ideas, and once you have a Play Order you like, it's possible to 'flatten' playback of the Play Order back into a linear arrangement.

One neat feature of the old Cubase was Mixer Maps: the ability to create on-screen panels to control external MIDI devices, so that if you wanted an on-screen representation of your Access Virus synth, for example, you could define various rotary controls, faders and switches to send messages and remotely alter the physical controls on the device, creating a Mixer Map. This functionality has returned in SX 3, as an extension to MIDI Device Maps, called MIDI Device Panels. Once you've created a custom Panel, it can appear in its own window, much like a VST Instrument editor, or in a dedicated Inspection Section or Mixer view.

Last, but not least, in my very brief highlights of SX 3 is Inplace Editing, which enables you to expand a MIDI Track so that it displays an almost complete Key Editor, including Controller Lanes, in the space that the Track occupies in the Project window.

Although that's all we've got space for this month as a preview, look out for the review of SX 3 in next month's issue. There we'll be making a more in-depth examination of what Steinberg have done with the latest version of Cubase.

As you may know, it's possible to manipulate the global timeline of a Project based on the positions of the left and right locators, moving all objects forward or backwards in time on the Event Display, or cutting and pasting sections of Parts across all tracks in the Project in one pass. These time-based commands are particularly useful because they also affect the Tempo Track, moving tempo changes forwards and backwards as needed. That can normally only be done via the Tempo Track editor.

When you're working on a Project, it's quite common to reach a stage where you need to insert an extra couple of bars between objects, and it can be a real pain to manually split all the objects (where necessary) and move them forward. Instead, to insert a couple of bars at a point in the Project, use the left locator to indicate where you want the extra time to be inserted, and the right locator to specify the length of time you want to add. So, if you wanted to add four bars at bar 41, for example, you'd drag out a selection from bars 41 to 45 and select Edit / Range / Insert Silence or press Shift+Control/Apple+E.

The reason the above techniques are worth knowing about in the context of Range Selection, as covered in the main text, is that all of these commands work within the scope of a Range Selection if you don't want to affect the whole Project. For example, if you wanted to insert two bars in the middle of a Project on only two tracks, you could drag out a Region Selection across these two tracks (where the start represents the point to add the extra time and the end denotes the length of time to add), and then use the same Edit / Range / Insert Silence Command.

When you make selections on the Project window with the Select tool, it's only possible to fully select one or more objects, which is great if you want to copy the eight-bar piano Part from bar one to bar nine, for example. However, what if you wanted to copy only bars three to six of the piano to bar nine, instead of the whole thing? While this isn't exactly a cumbersome process, you'd have to perform a little resizing after copying the piano Part, to trim the start and end points, and also make sure the Part started correctly at bar nine. 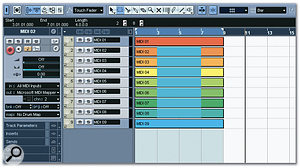 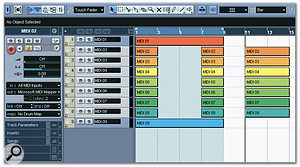 The Region Selection tool makes accomplishing certain operations, such as the one illustrated in these two screens, incredibly quick and easy. Here, a selection that includes certain sections of specific Parts is moved to another area of the Project in one drag of the mouse: no need for the Scissors tool!To make life easier in these situations, especially when working with multiple objects across multiple tracks, Steinberg implemented the Range Selection tool, which allows you to select just a region of the Project window. Taking the previous example, the Range Selection tool would allow us to select just bars three to six, rather than the whole Part, and copy only that section to bar nine.

The Range Selection tool's icon appears next to the main Select 'arrow' tool on the Project window's toolbar and can be selected using the same methods as for any other tool — either by clicking on this icon, pressing the relevant Key Command (2 on the main part of the keyboard, by default), or from the Quick Menu.

With the Range Selection tool selected, you can make a selection by simply dragging the mouse in any direction to cover the area you want. The selection can be made across a single object and track, or over multiple objects and tracks; if you've used a word-processing application such as Microsoft's Word, it might be helpful to think of Cubase 's Range Selection procedure like making a text selection in Word.

While you're making a selection, you might notice that it automatically snaps to the Event Display, if Snap Mode is enabled. Once a selection has been made, you can modify its start and end points by placing the mouse pointer over the start or end of the selection, until you see the resizing tool, and dragging the start or end point to the new position. Alternatively, make more precise numerical alterations to the selection by using the Event Infoline, which automatically displays the settings of the current selection.

It's All In The Wrist

If you hold down the Alt/Option key while dragging a selection with the Range Selection tool, the selected area is copied to another part of the Event Display, leaving the original objects unharmed. To delete an area marked by a selection, select Edit / Delete or press Backspace. You can split objects covered by the selection at the start and end points of the selection by choosing Edit / Range / Split or pressing Shift+X.

A useful way of resizing an object or objects is to drag out a selection representing the new length of the object, with the Range Selection tool, and select Edit / Range / Crop. The objects covered by the selection are cropped to the start and end points of the selection, although no data is actually lost and you can easily resize the object to restore it.