Using an Instrument Track to host your VST Instrument (as shown here in green for the Embracer synth) gives you access both to audio insert effects and to the Quick Control system.

Whether it's Donna Summer's 'I Feel Love', Modjo's 'Lady', Shapeshifters' 'Lola's Theme', Madonna's 'Future Lovers', or any number of dance classics, filter sweeps abound — and Cubase 5 features a number of tools that can, in combination, make configuring and controlling such effects very easy.

To illustrate the mechanics involved, let's consider some examples: a combination of three ought to do the trick. The first example involves basic filter‑sweep processing that's sync'ed to the project tempo; the second requires filter sweeping under manual control — which allows you to use automation and a MIDI controller to alter the effect in real time; and the third uses a gate to give the filter processing a stronger rhythmic component.

If you'd like to hear some short audio clips to help you understand the effects and sounds I'm describing, you can find them at /sos/may10/articles/cubasetechaudio.htm. 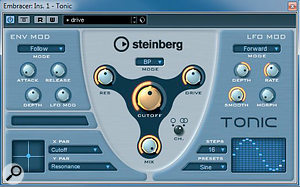 For a basic filter sweep in Tonic, keep things simple: set the Env controls to neutral.

The principles of what follows can be applied to any audio track, whether an individual instrument, a group channel or a complete mix. I'm going to use a VST synth as my sound source, because this is one of the most common sources to which such effects will be applied.

Cubase includes a number of filter effect plug‑ins, but Tonic is the most flexible and interesting. As with any insert plug‑in effect, Tonic needs to be placed across the audio output channel of your VST instrument. So you could take the traditional approach to create your instrument — which is to add it directly to the VST Instruments panel, create a suitable MIDI channel and assign its output to the VST Instrument, and then insert Tonic on the audio output channel of the Instrument in the Inspector (or the Mixer). At the time of writing, this approach has an important limitation: like Group Channels and FX Channels, VST Instrument audio channels set up in this way do not support the very useful Quick Controls, which I explored back in SOS July 2009. I'm told that this may be addressed in the forthcoming Cubase 5.5 update, which has just been announced. Meanwhile, a better option is to use dedicated Instrument Tracks, as these do support Quick Controls. (Unfortunately, they allow only a single stereo output, so you can't take different outputs from a multi‑output instrument such as Kontakt when working in this way.)

To create your Instrument track, go to Project / Add Track / Instrument, and select your choice of Instrument in the dialogue box that appears. You should now have a track that combines the recording/playback of MIDI data with an audio output for your Instrument, the ability to place audio Insert effects on its output, and access to Quick Controls in the Inspector. 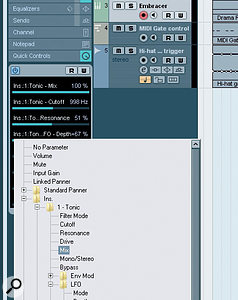 Quick Controls on the Instrument Track give you easy access to key parameters of your audio plug‑ins, as illustrated here for Tonic.

With our VST Instrument configured, we can build our processing chain. For our first example, a simple filter sweep that's automatically sync'ed to the project tempo, all we need to add is our filter plug‑in (in this case Tonic, pictured left). With all the Env Mod controls set to minimum or neutral, this section is effectively bypassed, and the filter, which I've set to Band Pass (BP), simply sweeps at a speed set by the Rate control (two steps per beat here) in the LFO Mod section.

The 16-step, sine‑wave-shaped LFO pattern produces a gradual change in the filter, while the high Smooth control smooths out transitions between steps of the LFO pattern. The Mix level, which adjusts the blend of unprocessed and filtered sounds, and the Depth knob, which controls how extreme the filtering gets, now become your two main ways of controlling the effect.

If all you want is a simple filter sweep in sync with your song, it needn't get any more complicated, but Tonic offers plenty more variety.

For our second example, a more hands‑on approach, with a hardware MIDI controller, is required. Link your chosen controller(s) to Cubase's Quick Controls via Devices / Device Setup / Quick Controls. (This process was covered in the Cubase workshop in SOS July 2009, so I'll not retread that ground here.) Once you've done this, specific Tonic controls can be linked to a QC slot via the Inspector. The obvious targets are Cutoff, Resonance, Drive and Mix. The automation Read and Write buttons in the Inspector's QC panel make it very easy to record and fine‑tune your handiwork.

If you choose to use Tonic, as I've done here, make sure that you initially set the Depth control to zero (the 12 o'clock position), as this will stop the LFO getting in the way of your manual control of the filter. It's also a good idea to set the Smooth control to a minimum, because this control smooths any changes to the filter setting, not just those driven by the LFO: if you leave it in the fully clockwise position, you might be left wondering why your rapid twiddling isn't producing a correspondingly speedy change in the filter's sound. With that done, you can then twiddle your controllers to taste.

Rhythm Is A Dancer 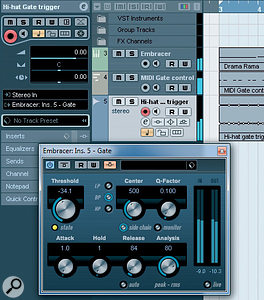 Audio from the hi‑hat track is routed to the gate plug‑in on our synth track via the gate's side‑chain input (the side‑chain button lights in orange when activated).

While you can make your filter processing 'fit' into the overall arrangement and dynamics of your track via MIDI controllers, a stronger sense of rhythm can be achieved by adding a gate to the signal chain — which brings me on to our third example. Cubase offers a choice between the MIDI Gate and the standard audio gate plug-ins. The former, discussed in detail in SOS June 2007, is essentially an audio gate plug‑in whose gate can be controlled using MIDI note information from a separate MIDI track, rather than the incoming audio. With the MIDI Gate inserted after the filter on our Instrument Track, notes on this separate MIDI track can open and close the gate to create a rhythmic pattern.

The other approach is to use the side‑chain input on Cubase's standard Gate plug‑in. As described by Matt Houghton in the June 2008 Cubase workshop, a common trick is to use another rhythmic element in the mix as the side‑chain input signal. This could be a full drum mix, for example, or, more usually, a single element from the drum performance, such as the kick, snare or hi‑hat. Imagine that you have an interesting hi‑hat pattern recorded on a separate audio track. Insert the Gate plug‑in after the filter on your Instrument Track and enable the side‑chain input. Next, go to the hi‑hat track, select the Gate's side‑chain input in a send-effect slot, and increase the send amount until you can see the gate triggering. The Gate will now open and close as the hi‑hat plays (you might need to tweak the send level or the Gate's threshold, to fine‑tune the triggering), and the filtered synth should now sound much more rhythmic. Finally, adjusting the attack, hold and release of the Gate gives you more control over the rhythmic feel. 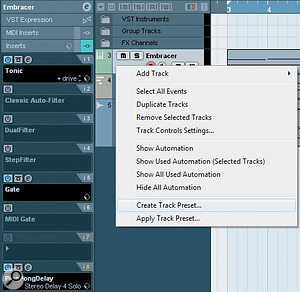 Creating a Track Preset containing all the plug‑ins required for a task, which can be activated as required, enables you to repeat your filtering setup in double-quick time.

A hi‑hat trigger can often produce a busy rhythmic result, and using a kick or snare part will generally trigger the gate less frequently, leaving space to add some further ear candy using a delay plug‑in. For something full on, choose Cubase's PingPongDelay, which will bounce your filtered synth part around the stereo field in sync with your track.

Having combined the use of an Instrument Track and a filter plug‑in, perhaps added gate and delay plug‑ins and configured your Quick Controls, save your chain as a track preset. Right‑click on your Instrument Track and select 'Create Track Preset': next time you want to filter and chop a synth sound, you'll be up and running in no time.

Given the range of controls and the huge number of synth sounds that Cubase now offers, there are almost limitless possibilities when it comes to filter sweeps, and they can be expanded further with any of the excellent third‑party VST filter plug‑ins that are available (such as the freeware Classic Auto‑Filter from www.kjaerhusaudio.com).