Things get gritty as we take a tour of Live's varied distortion effects... 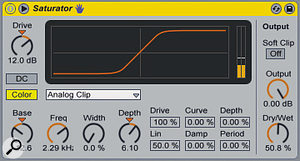 A flabby kick-drum is processed with Saturator to add some harmonics in the upper frequencies and round out the low‑mids for extra punch.

Ableton Live offers many ways to create distortion via its vast array of high‑quality plug‑ins. These processors can be used for many purposes, from warming up digital‑sounding instruments and adding harmonics to dull tones, to completely decimating audio signals for dramatic special effects. This month, we'll be exploring six different distortion effects included in Live 8, giving you the lowdown on their inner workings and on the best ways to employ them in your projects.

It's Getting Hot In Here

Let's begin with the warm‑sounding Saturator plug‑in. This is a waveshaping device that maps the incoming audio signal to new output levels, introducing clipping as a result. It can be used to increase presence by adding harmonics, while also rounding the bottom end for extra punch, which can sound great on kicks, toms and snares. You don't even need to push that hard to get results — I find a Drive setting in the 8‑12dB region is more than adequate. Curve Types are chosen from the menu underneath the waveform display, with Analog Clip and Digital Clip providing the most severe and immediate distortion, while the Soft Sine, Medium Curve and Hard Curve are somewhat subtler. The Sinoid Fold Curve Type can sound quite bizarre and, along with the Waveshaper, is best used for special effects, so I'll leave you to experiment with these in your own time.

To further adjust the sound of Saturator, you can engage its two built‑in filters via the Color (sic) button. The Base knob controls the first filter and determines how much the Saturator effect is increased or decreased for the very lowest frequencies of the input signal. The other three knobs control the second filter, which acts more or less like an EQ, with the Depth parameter adjusting how much effect this filter has. 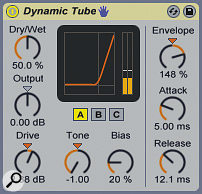 A lifeless drum track is given a little warmth and some subtle higher frequency grit via Live's Dynamic Tube — note the low Drive settings.Now let's look at the Dynamic Tube plug‑in, which is another type of saturation device, though this time it's modelled on real‑world tube amps. There are three models (A, B and C). The first one produces almost no distortion if the Bias is turned down and the input signal remains below a certain threshold, but it adds very bright harmonics whenever the input exceeds this threshold. Model C adds distortion more or less constantly, even at low input volumes, and B is halfway between the two.

The Dynamic Tube's Tone knob concentrates the distortion in certain parts of the frequency spectrum for sound shaping, while the Bias control (along with the Drive) determines the intensity of the non-linear distortion being added to the signal. The Bias control is also linked to an envelope follower, enabling you to increase the amount of distortion as the input volume increases, or the opposite if the Envelope is set to a negative value.

With positive Envelope settings, the Dynamic Tube mimics the characteristics of a valve guitar amp, so soft sounds are ever so slightly saturated and louder ones produce harmonically rich distortion. To get the best from the effect, it's best to feed it very dynamic sounds. For example, it can work wonders (in small doses) on transforming lifeless drum tracks by rounding out the bottom end and adding some grit to the upper frequencies.

One thing to remember with both the Saturator and the Dynamic Tube is that Hi‑Quality mode can be engaged by right‑clicking (PC) or Ctrl‑clicking (Mac) on the Device Title Bar. This will noticeably improve the overall sound quality of the effects, especially in the upper frequencies, albeit at the expense of a slight CPU hit.

A lead synth is given more upper frequency harmonics with Overdrive to help it slice through the mix.

Another guitar‑oriented plug‑in is the Overdrive unit, which was first introduced in Live 8. It's based on the circuits found in distortion stomp-boxes, but there are some crucial differences. While most guitar pedals of this type will apply a rather vicious form of compression to the input signal as the amount of drive is increased, Overdrive gives you the option to preserve the dynamics of the source material. This is controlled via the Dynamics slider, with high settings yielding almost no compression as the Drive is ramped up. Of course, you can still get the classic heavy compression offered by distortion pedals by turning down the Dynamics control.

Another unusual addition to this type of effect is the band‑pass filter, which precedes the overdrive stage, enabling you to dramatically alter the frequency response of the resulting distortion. More sound-shaping options are offered by the Tone control, which can be used to create anything from deep rumbling bass through to screeching white noise at its most extreme settings, especially with the Drive control maxed out. 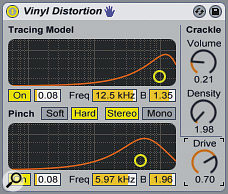 Our master channel is treated to some gritty Vinyl Distortion and a little Crackle, though the settings are deliberately subtle.It must be said that this plug‑in is far less subtle than the saturation units covered above, so it's best used when you want a more over‑the‑top distortion sound for lead instruments. One thing to note is that, even with the Dry/Wet control set to zero percent, the Tone knob will still affect any signals passing through it.

The next modelled effect is the Vinyl Distortion, which is based on the harmonic distortion that is created by turntables. The Tracing Model adds even harmonic distortion, while Pinch produces odd harmonics. The Frequency and Bandwidth sliders adjust the area at which these distortions occur, and there's another unnamed slider for changing the gain. The Hard and Soft modes shown in the centre of the plug‑in's GUI model the sound of commercial vinyl and rough dub plates respectively.

As this is an effect that's usually heard on complete tracks, it's best to use it on the master channel, with the individual Drive amount sliders of the Tracing Model and Pinch sections set below 0.10. Another way of adding interesting vinyl artifacts is to engage the Crackle section, though I'd recommend keeping the Volume and Density very low, so that the effect is only heard subtly during the very quietest sections of your tunes. 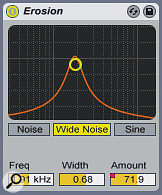 A pad sound is manipulated with Erosion during a breakdown, with the Amount automated to add more distortion over time.

Erosion, like Vinyl Distortion, has been with us since the first version of Live and offers another very useful variant on the types of distortion we've covered so far. Erosion degrades an incoming signal by modulating it with either a sine wave or delayed band‑pass‑filtered noise, both of which produce digital artifacts known as aliasing.

The controls are very simple. In Sine mode, you can decide on the Frequency of the sine wave being used and the Amount of modulation being applied. In Noise mode, there are the same controls, with the Frequency this time controlling the filter's central frequency and Width determining the filter's bandwidth. There's also a Wide Noise mode, which uses separate delay lines for the left and right channels, creating a much wider stereo image.

I've found that Erosion can be particularly useful on background sounds, such as effects and pads, or otherwise employed during selected sections of a tune. Try increasing the Amount control on certain sounds during a breakdown, for example, to gradually reduce the audio quality before turning the effect off completely on the drop.

Adding some retro 8‑bit flavour to synth sounds using Redux's Bit Reduction control.Last but not least is Redux, which is a throwback to an age when digital technology was considerably less advanced. So if you've got a hankering for some of the classic 8‑bit sounds of Commodore 64's SID chip or the 12‑bit tones of old Akai samplers, this is the effect for you. There are just two knobs with which to contend. The first of these, Bit Reduction, is used to lower the bit depth of incoming audio so that possible volume levels are reduced until the point where the signal is either a full positive or a full negative, though this extreme setting sounds absolutely hideous! Nevertheless, a milder setting of eight or 12 can add some of that nostalgic digital magic.

Moving the Downsample knob round to the right gradually reduces a signal's sample rate, meaning that there's a loss of information as the number of processed samples per second falls. This results in a very unnatural, stepped waveform that's full of digital artifacts. Again, automating this knob to gradually increase (or decrease) the amount of degradation on certain sounds is a good trick for intros, outros and breakdowns.

As mentioned, some of the effects (Dynamic Tube, Overdrive and Saturator) feature a Dry/Wet control, while the others do not. However, all six effects can just as well be placed on a Return track in order to blend the distorted signal with the unprocessed one. But why stop there? Now that the distorted signal is separated, try loading up additional effects on the Return track in order to further twist the tone of the distortion itself. For example, you can add a Phaser or an Auto‑Filter plug‑in after one of the distortion effects to either subtly or drastically modulate its sound over time.