Behind the scenes in Pro Tools 9 there are some major changes to how the I/O Setup window works.

When we reviewed Avid's Omni I/O interface back in SOS October 2010, we noted that the way in which Pro Tools addressed inputs, outputs and buses had changed significantly in the HD 8.1 software release. Now that those changes have been rolled out to all versions of Pro Tools 9, it's time to look at them in more detail.

The Way It Was

In any Pro Tools system before 8.1, I/O settings are recalled from the Pro Tools Session document. When you opened a Session, any studio settings for your system would be overwritten by the settings stored with that Session file. This meant that studio settings corresponding to your hardware could change when a new Session was opened, especially if that Session originated in a different studio. Likewise, when creating a new Session, if you allowed the I/O Settings to default to Last Used, you could inherit an completely unknown and unsuitable set of I/O settings, depending on what kind of system created the 'last used' Session.

The I/O Setup window has grown a few new settings to handle this option. You will see that there is now a tick box at the bottom. 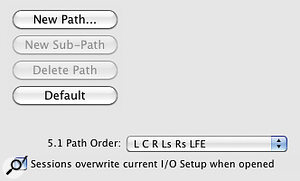 New in HD 8.1 and Pro Tools 9 is the option to retain system I/O settings rather than loading those of a Session. With this ticked, Pro Tools 9 will use the Session settings just as it has always done. To force Pro Tools to use the system settings, you need to untick it. When moving Sessions between systems where one is running Pro Tools 8.0.x or lower, Avid recommend that the box should be ticked, which is the default setting. However, any custom settings saved with the Session that do not match your system may need to be reconfigured in the I/O Setup window, just like we always did. When moving Sessions amongst different systems that are all running Pro Tools 9.0, Avid recommend not ticking the box. This will maintain the custom settings on all the systems, and Pro Tools will automatically re‑map Session output buses to the system output paths when opening Sessions created (or edited and saved) on other systems.

To make this possible, Pro Tools now has two types of buses: internal mix buses, which work as they always did, and the new Mapped Output Buses. 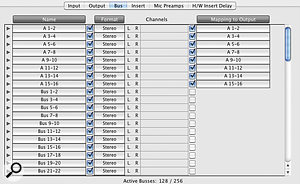 The new Mapping To Output section of the Bus tab makes it straightforward to reassign mixer outputs to physical outputs on your interface. Avid have introduced this additional set of buses in order to differentiate between physical outputs and routing settings, so when you select an output in Pro Tools 9, you are actually selecting a bus. In the Bus tab of the I/O Setup window, you can determine how these output buses are mapped to your actual hardware outputs. It might help to think of this as analogous to using a patchbay on an analogue desk. To reassign a desk output, you would cross‑patch it so that, for example, output 1 fed track 8 on your multitrack recorder. Avid have separated mixer routing and output routing in the same way in Pro Tools 9, so you will see that when you select an output for a mixer channel, the drop‑down menu no longer says 'Interface' but now says 'Output'.

One of my clients regularly has problems with Sessions 'not playing' depending on what system the Session was last opened on. This is because, with the introduction of digital mixers in some studios, the main stereo output is often not analogue outputs 1/2, as it is in the analogue studios, but one of the S/PDIF or ADAT digital output pairs, as these have been used to interface Pro Tools to the digital mixer in the studio where the Session originated. So what happens is that when a Session last used in a digital studio is opened up in an analogue studio, the Session appears to play, but the user doesn't hear anything until he or she goes through each track and changes the output routing to analogue outputs 1/2. 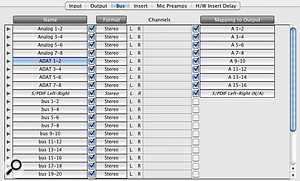 This Session was created on a 003‑based LE system, where the first ADAT output pair serves as the main outputs. In Pro Tools 9, all I need to do to make it play back in my system, which uses the first analogue output pair, is to reassign the output mapping of 'ADAT 1‑2' to 'A 1‑2' instead of the default 'A 9‑10'.

The new system in Pro Tools 9 makes this easier to manage even if you tick the Session Overwrite box when opening such a Session. Instead of having to change the output routing for every track, all that's needed is a trip to the Buss tab of the I/O Setup window, where you will find a new set of buses at the top. These are the Output Buses, and in the screen above you will see that the output buses for ADAT outputs 1/2 — which in this case are serving as the main outputs for the Session — have been mapped automatically to outputs A9/10 in my system. This isn't such a silly idea, because the default settings for my 192 interface are that A9/10 are routed to ADAT outputs 1/2. However, as it happens I use the first pair of analogue outputs from the 192 to feed my monitors, so all I need to do to hear this Session is change the 'A9 & A10' in the Mapping To Output column to 'A1 & A2'. Hey presto: sound! Note, though, that nothing changes on the Pro Tools mixer: the output routing still says 'ADAT 1‑2' even though the audio is now being routed out through analogue outputs 1/2.

So what would happen if I passed this Session back to a studio that used a different output pair as their main outputs? Well, it depends on what version of Pro Tools is in use there. In Pro Tools 9, it would be a simple matter of changing the Mapping To Output column to the appropriate outputs. In Pro Tools 8.0.x or lower, you will get a warning that you may have data in the Session that will be ignored, because earlier versions of Pro Tools don't recognise Output Buses. What will happen is that Pro Tools 8 will use the Session setting data, in which the output routing is set to analogue outputs 1/2, so the Session will be silent again, and the user will have to reset the output routing for every track back to ADAT 1/2 (or whatever pair they are using).

While we're in the I/O Setup window, it's worth mentioning that the options for importing I/O settings have also changed in Pro Tools 9. It is now possible to import the settings for just one tab, and in fact, that is now the default mode, so when you click on Import Settings and select an I/O Settings file, Pro Tools will only import the settings for the tab you're in. You also get the option to delete existing paths: click Yes to remove any unused paths and add the imported paths to the current I/O Setup configuration, but remember that any I/O assignments and automation data associated with the unused paths will also be deleted. Alternatively, click No to add the imported paths to the current I/O Setup configuration. Be aware, though, that if the import results in overlapping paths, the new paths will appear in the I/O Setup window as Inactive.

To help readjust a complex I/O Setup, Avid have also added a Show Last Saved Setup option to both the Input and Output tabs. This enables you to temporarily see the last saved setup from the original Session.

The new system also makes it possible to map any internal mix bus to an output, should you wish to do so. In the screen above right 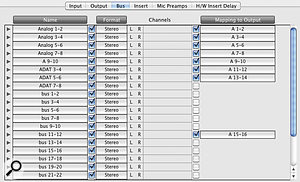 Any bus in Pro Tools can now be routed to an interface output, as here with 'bus 11‑12'. you'll see that I have routed buses 11/12 to outputs A15 and A16. In addition, because output buses are buses and not outputs, it is possible to route more than one mix bus to them. This enables a number of mixes to be routed to an output, so providing even more versatility.

The Keys To The (Output) Bus

At the time of writing, 8.1.1 and 9.0.2 are the latest versions of Pro Tools, and they fix a bug which meant that the standard Pro Tools key modifiers for Do To All, Do To Selected, Cascade Across All, and Cascade Across Selected did not function when mapping mono output buses to multi‑channel output paths in the Buss tab of I/O Setup.

Talking of updates, my transition to Pro Tools 9 (and Mac OS 10.6.6) was relatively trouble‑free, except that Pro Tools very kindly took my full version of Structure out and replaced it with the Free version, losing my large Structure library. If I had left the transition until Pro Tools 9.0.2 came out, that wouldn't have happened, as this was one of the 70 fixes that were implemented in the upgrade.