Drag Techniques/Backing Up In Sonar Skip to main content

Drag Techniques/Backing Up In Sonar 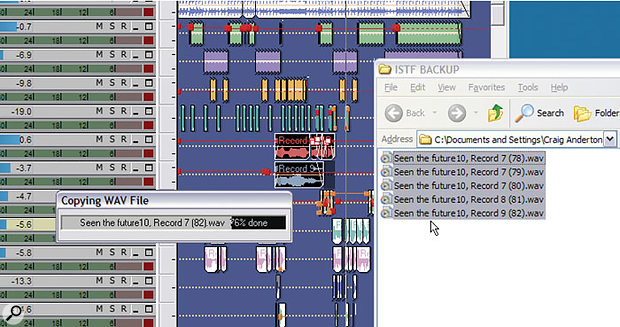 Figure 1: Drag and save in Sonar.

This month I'm going to be looking at a variety of drag-and-drop clip options that Sonar supports. For example, in addition to drag-and-drop within a project, you can drag and drop clips among different projects that are open simultaneously. The rules are the same as for doing this within a single project: dragging the file moves it from the origin to the destination. If you want to drag-copy the clip, click on the clip, then hold the Ctrl key as you drag. Just remember to click on the clip itself, not on any automation envelopes or fades that may be riding 'on top' of it.

Note that if you've slip-edited the clip (for example, to shorten it), when you drag it you drag the entire clip. It still shows up at the destination as being slip-edited, but you can 'unroll' the clip to reveal the slip-edited part.

Also note Sonar's 'drag and save' option. If you drag a clip off the project and onto the desktop or a folder (open or closed), it will remain at its origin, but will also be renamed and saved at the destination. A 'Copying WAV File' bargraph indicator keeps track of the copy progress. You can even select multiple clips and drag them simultaneously to a destination folder.

In Figure 1, several clips have been selected and dragged off to a folder for backup. The 'Copying WAV File' progress indicator shows the copy progress for each clip that's dragged over. In this case, five clips have been saved. Note that this procedure saves the raw files, without the effects of any automation or plug-ins.

The file is renamed with the following useful format: [name of project], [name of clip], and an ID number. This lets you see at a glance the project to which a file belongs. If you don't name the clip, the clip name will simply say 'Record' followed by a number.

If you drag the files to a closed folder, simply opening it should be enough to refresh the view. By the way, if you drag a groove clip (not just a WAV file) off to a folder for saving, it retains all its grooviness.

Consider this: you're conscientious about backing up, and when you finish a project you immediately save everything as a bundle file, or you back up the per-project folder to a medium like CDR, DVD+R or DVDR, tape drive, or removable hard drive. Your job is done, right?

Not necessarily. When you need to open your files five or 10 years from now because someone wants to do a remix or reissue, the media may be fine, Sonar may recognise the file, and all seems ready to go...until you find that several plug-ins won't load, because they're not compatible with Windows a few generations down the line, or you switched to a different computer and authorisation was tied to your original hard drive (worse yet, the company may have gone out of business, precluding re­authorisation).

Figure 2: Backing up by bouncing all tracks to a single clip.Weird stuff can happen too. I tried to pull up a project in Sonar 2.2, but it said it couldn't load plug-ins that I knew were installed on my system — older files, using the same plug-ins, loaded without a hitch. Was there file corruption? Did I rename the plug-ins and not remember that I did? I'll never know. But this made me realise that simply backing up is not good enough.

The most universal backup format is to save each track as an individual WAV file — I think that even a decade from now, programs will be able to, at the very least, import WAV files. This also yields the greatest possible compatibility with other programs. The drag and save technique seems ideal for this concept: Select all tracks, drag them to a folder, back up the folder to multiple media, and voilà. But it's not quite that simple.

The upper track in the screen overleaf consists of a number of clips. The lower track is a clone of the upper track, but with all clips selected, then bounced to a single clip. The beginning has also been extended to the start of the song. Gaps between clips appear in the bounced clip as silence.

First, all the tracks need to have a common starting point, so you can time-align them when you import them into your DAW. Therefore, any track you save should extend from the song's beginning to the end of whatever's recorded on the track. You can do this by selecting all the clips in a track and going Edit / Bounce to Clip(s). This fuses them all into a single clip whose length extends from the leftmost clip to the rightmost (if there are gaps between clips, they are rendered as silence). Grab the leftmost edge of the composite clip, and drag it out to the beginning of the song. Then (important!) go Edit / Bounce to Clip(s) a second time so that this extra space becomes part of the clip as well.

If you don't bounce all a track's clips to a single clip, there are additional issues. If you select each clip, then drag and save, each will be saved as a separate file, with no obvious temporal relationship (Broadcast WAV file time-stamping should take care of this, but let's assume a worst-case scenario.) Furthermore, when you drag a slip-edited clip over, the entire clip gets saved — even any hidden parts. In many ways this is great, because you can go back and 'open up' the clip to reveal the edited part. But it doesn't help in terms of backing up individual tracks, only the clips that comprise them.

Also, automation moves, automation envelopes, clip envelopes, and the effects of any signal processing are not saved with a drag and save operation — only the raw clip data. While this is ideal for remixers, you may want the file to include some of these elements, which brings us to... 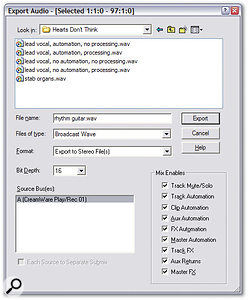 The best solution for a truly universal backup is to export each hard-disk track individually (we'll deal with MIDI tracks and virtual instruments in a bit). To do this, select only the track to export (I also solo it for added security), and select the range to be exported (ie. from the beginning of the song to the end of the track). The signal comes from the Source Buss being fed by the track, so to be absolutely safe play the track all the way through and make sure that both the track and bus meters don't indicate an excessively high or low level.

If the levels are fine, double-check that you've selected the correct range, then go File / Export / Audio. You'll see a dialogue box that determines the exported track's characteristics.

The Export Audio dialogue box lets you choose a file format and type, along with bit depth and 'Mix Enables' options. These come in handy when you want to save multiple versions of the same track — one with automation, one without, one with processing, one with no plug-ins, and so on. For example, perhaps the reverb plug-in you used on the original vocal track sounds pretty cheesy compared to what a native reverb can do in 2008. In that case, you'll be glad you saved a version without reverb. Ditto automation: it's prudent to save a version of a file with automation moves and one without, in case you change your mind about levels.

Render any virtual instrument outputs to an audio track, which can also be saved as a file. We've covered how to do this before, but the basic idea is to drag across the range you want to mix down, in the time line above the tracks. Then solo both the track containing the soft synth audio and the related MIDI track driving the soft synth. In the track view, control-click on both track numbers so that they're both selected, play the part and check the track and bus meters for overload, then export as described above.

While we're in a drag-and-drop mood, let's look at some of the options Sonar allows when moving clips around. 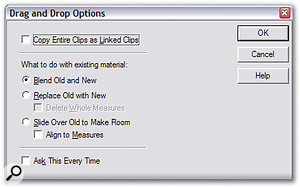 Drag and Drop options.The drag and drop options are powerful, but double­check where you click, because what you select becomes the default. Some users click on 'Replace Old with New' and then wonder why moving a clip deletes parts of older clips. Until you find the default that works best for you (I use 'Blend Old and New'), you have the option to tick the box that says 'Ask This Every Time' and choose the appropriate option.

Right-click in any empty space in the clips pane, and choose 'Drag & Drop Options'. Under 'What to do with existing material', you have several choices.

We're not done yet: Part of the backup should include any MIDI data that drives virtual instruments or provides controller data. Just use the File / Save As function to save the song, choose the file format (I recommend MIDI Format 1, as it saves each channel to its own track), then save. Open up the resulting file and make sure that the tracks are labelled in such a way that it's obvious which track drives which soft synth. In fact, document the entire tune in as much detail as humanly possible, and save this documentation in an ASCII text file with the rest of the files. This will be extremely valuable should you need to work with the song several years hence.