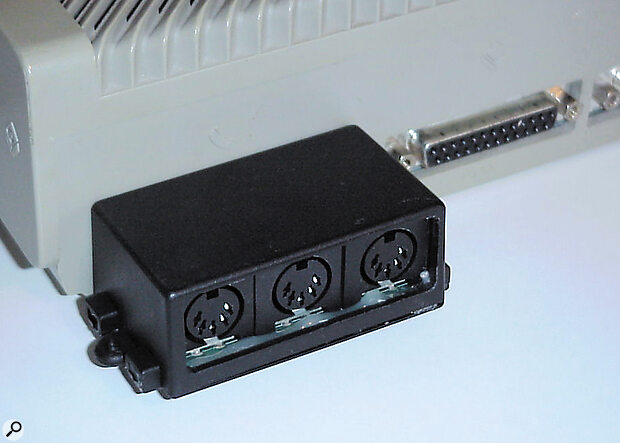 Derek Johnson reviews a new MIDI output expander and ruminates on the release of a herd of Electronic Cow programs as shareware.

The fruitful gadget lab that is New Zealander Mario Becroft's workshop has produced many a handy ST add‑on, including the Qwertyx PC AT keyboard/serial mouse interface, IDE hard disk Interface/TOS 2.06 upgrade board, and ST VGA monitor adaptor. As mentioned a few months ago, Becroft's latest product is the MIDI‑3 multiple MIDI port adaptor. Given the right MIDI sequencing software, this device allows you to run a total of four independent MIDI streams, including the ST's existing MIDI Out. That's 64 MIDI channels in all. 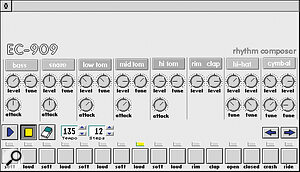 EC909 is Electronic Cow's answer to the virtual drum machine and bass synth sequencers available on other platforms.

MIDI‑3 is a utilitarian device with no frills. The one that I reviewed had a blank exterior, lacking even a screened or stuck‑on name, and no instructions. (The latter should be available soon.) The interface simply plugs into the ST's modem port, and if you're a C‑Lab Creator/Notator user (I'm not), your software will apparently automatically recognise MIDI‑3 as an Export, C‑Lab's own three‑way MIDI expander. Steinberg Cubase users (that's me!) should make sure that the Export driver is in the MROS folder. Though I wasn't able to test the interface with other multiple port‑supporting software, MIDI‑3's output 1 behaves as an extra MIDI Out for Hollis Research's Trackman and Roni Music's Sweet 16 sequencers. The MIDI sockets on the interface aren't labelled, but you soon learn that MIDI Outs 1, 2 and 3 go from right to left as you view the ST head‑on.

If there's a problem with MIDI‑3, it's the one that affects all ST interfaces built along these lines: there are timing and delay problems with data appearing on each numerically higher output, and the busier your arrangement, the more prone data is to clogging on the higher MIDI channels and on the higher‑numbered MIDI Outs. The delays aren't generally audible — I've heard much worse while trying to debug USB MIDI interfaces running under OMS on an Apple G4 — but you'll know when your arrangement is too dense due to a preponderance of choked notes. Under normal circumstances you may never be aware of a problem, though parts that are particularly time‑sensitive, such as drums, should be kept to lower channels on the ST's main MIDI Out.

I also found that the MIDI‑3 had a tendency to come unplugged while I was configuring MIDI leads; though this shouldn't be a problem once everything's set up, some way of securing the interface to the modem port's securing nuts would have been nice.

As for competition, Keychange Music's Proper Job, which is a little more expensive, offers a merging MIDI In and improved MIDI handling, due to interfacing with the printer port. However, it only works with Cubase. The MIDI‑3 requires no PSU and really is plug‑and‑play, for at least two major ST sequencing platforms.

Regular readers of this column will know that I often mention new software from quirky independent developer Electronic Cow. Sadly, Danny MacAleer, E. Cow head steer, has decided that he will no longer have time to develop anything new. I'm sorry to hear that this hard‑working chap won't be releasing new software in his distinctive cowhide‑effect packaging, and think he deserves a big thanks for putting so much into the Atari platform. Altruistically, his Electronic Cow web site is now offering all software as shareware; stump up the very reasonable shareware fees, and you'll be rewarded with a printed manual (and support) for your chosen software. This is quite an incentive; none of the software is difficult to use, but the manuals provide useful background.

So, perhaps for the last time, let's run through the Electronic Cow herd (with their new shareware fees):