Find out what the Pro Tools 11 world will hold for your hardware setup.

In this first Pro Tools workshop of 2013 I wanted to look forward to the future — or at least to what the post-Pro Tools 10 world holds for owners of existing Pro Tools hardware. There has been a lot of discussion and speculation about this issue, so I thought it would be good to take a look at what has and hasn't been said. There are a few conclusions we can reliably draw from the information that Avid have made available:

Still Up In The Air

Although it is clear that the HD TDM cards will no longer work with the 64-bit Pro Tools 11, the future of the 96 and 192 interfaces is much less certain. Avid have made clear on a number of occasions that they won't be doing anything to intentionally break support for the older devices, although they won't be officially supporting them any longer. In episode 88 of Dave Pensado's popular video series Pensado's Place, he put the question directly to Bobby Lombardi, Senior Manager Product Management at Avid: "The 192s won't work in 11, will they?” Bobby replied "My hunch is they will, they just won't be supported.” He goes on to say that Avid are simply "limiting the qualification list”, and further underlines his point by saying "We are not doing anything in the code to turn stuff off.”

Legacy HD hardware may find itself in a similar position to third-party offerings from the likes of Lynx and Apogee: not officially supported but still widely used.

The situation with these older interfaces might become comparable to that of third-party interfaces from companies like Apogee and Lynx. These were never officially supported by Avid or Digidesign. It has always been up to those third-party companies to enable and support that functionality — and that continues to be the case with new products like the Lynx LT-HD card for their Aurora. So it would appear that these third-party interfaces and the legacy 96 and 192 interfaces will continue to work in a post-Pro Tools 10 world for the foreseeable future, but there can be no guarantees.

Moving onto the 002, 003 and Mbox 2 families, the situation is less clear. Although Avid's statements treat them in the same breath as the 96 and 192 'blue' interfaces, my hunch is that post Pro Tools 10, there will be no drivers written for these interfaces, so if you would like to continue using them, you will need to stay with PT10. It is unclear what Avid plan to replace the 003 family with, as its demise leaves a hole in the Avid range. 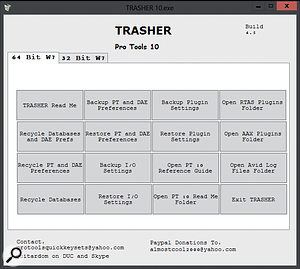 The future of the Control 24, Command 8 and Pro Control is also unclear. Although Pro Control still functions, it has not been officially supported in either Pro Tools 9 or 10, so there is significant speculation that when Pro Tools moves to 64-bit with Pro Tools 11, it will stop working, but who knows? As for the Control 24 and Command 8, there has been no indication as to whether they will continue to work. All we can say for sure is that they definitely won't be supported.

I hope this has helped to clear up some of the confusion that has arisen from Avid's announcements about the future of some of their hardware after Pro Tools 10. In summary, Pro Tools 11 and beyond will definitely not support HD TDM cards, TDM or RTAS plug-ins. There is still life left in the 'blue' HD and third-party HD interfaces, but the future looks less bright for native interfaces and older control surfaces. At least Avid have given us plenty of warning so we can plan what we might do when the time comes!

It is traditional to make resolutions at the start of the new year, so for this January workshop, I have put together some ideas to help you keep your Pro Tools system going in 2013 and beyond...

First, make use of one of the utilities that are out there to help you manage Pro Tools preferences and databases. Windows users have Trasher 10, put together by Steven Gilliland: he doesn't have a web site, but has put some information about it on the DUC (http://duc.avid.com/showthread.php?t=316863), and it can be downloaded from http://dl.dropbox.com/u/6233434/TRASHER%2010.zip. Once you have downloaded and unzipped it, place Trasher 10 inside your Documents folder (not the public Documents folder) and run. A full Read Me will be available once Trasher 10 has launched. This is what you can do with it: 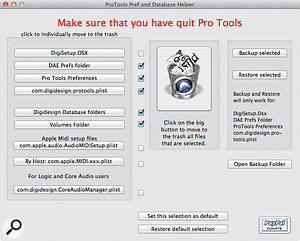 For Macs, Jean-Charles Deshaies has written an application (right) that can do a similar set of tasks — surf to www.jcdeshaies.com and download the version that suits your version of Pro Tools. Once you have downloaded the file and unzipped it, drop the application into your Applications folder and run it.

There are tick boxes for each of the options that I have listed above, and Jean has added a feature which allows you to back up your preferences, once you have a working, reliable set of them. This means that when you have to delete your preferences, you can use the Restore feature, so you don't have to work your way through the various Pro Tools Preference panes resetting them from the default settings back to your preferred settings. If, like me, you find this application useful, make sure you click on the PayPal Donate button and give Jean a bit of cash!

Avid have put together some detailed 'troubleshooting guides' which also help to set up your computer in a Pro Tools-friendly way. It will save you a lot of trouble if you work through these guides and set up your computer as suggested. Avid and the Pro Tools community have a lot of experience of what works and doesn't work, and what won't play nicely with Pro Tools, so do work through these guides before asking for help if your Pro Tools system isn't working properly:

When troubleshooting, only change one thing at a time, and change it back to confirm. That way you can be sure that the problem goes when you changed it and returns when you restore it. It is the only way to be sure you have fixed the problem.

Especially with USB and Firewire interfaces, you should check you have the latest drivers — for third-party interfaces, check the appropriate manufacturer's web site, but for the Avid interfaces check this Avid page, where Avid have been posting regular updates: http://avid.force.com/pkb/articles/en_US/download/en379411.