We examine three different ways to harness the power of granular synthesis in Live.

We follow last month’s coverage of Granulator II with three very different approaches to granular synthesis. Iota is a graphically oriented grain player; Borderlands is an iOS device for hands-on triggering of grains from multiple samples; and Seurat MIDI is a generator of MIDI note streams with random elements that you can use to play Sampler key and velocity zones holding grains.

Iota from Dillon Baston (£25$49: www.ableton.com/en/packs/iota/) is a Max For Live instrument that takes a graphical approach to creating, triggering and automating multiple grains from a single audio clip. You drag a clip from a track, clip slot, Live’s Browser or your computer’s file system to Iota’s display and select the region within the clip from which to extract grains. The sample display then changes to a spectrogram, horizontally spanning the selected time region and vertically spanning the frequency spectrum from 20Hz to 20kHz. You use the Pencil tool to the left of the display to draw rectangular grains on the time-frequency spectrum, the Hand tool to move grains and the Arrows tool to resize them. The Snap-to-Grid toggle above the tools locks grain playback length to the nearest gridline (the grain display does not change). Selecting a grain reveals adjustable playback parameters to the right of the display. To the right of that you select the playback mode, an optional delay amount for the right channel and the overall output level. Looping playback (top) can be free or locked to Live’s transport, whereas the keyboard icon lets you trigger grains with MIDI notes. On the far right, you dial in the ADSR volume envelope applied to all grains.

In Screen 1, I’ve created six grains in a sound-effects audio clip and assigned different MIDI notes to trigger them. The three overlapping regions on the right play different frequency zones from the same time segment of the clip. Keep in mind that Sync only affects length; zones triggering does not align to the sync grid. When you want to force synchronised zone triggering, assign the zones to the same MIDI note.

Borderlands by Chris Carlson (£11.99$9.99) is an iOS application with a hands-on approach to granular synthesis. You start by importing or recording audio clips and you then arrange their positions on your iOS device’s screen. Importing requires the AudioShare app (£3.99$4.99), which, among other things, lets you download and upload audio files to Dropbox. Once audio clips are displayed on your screen you can create grain clouds by double-tapping. You configure each grain cloud’s playback parameters by adjusting circular sliders along with buttons across the top of the screen as shown at the bottom of Screen 2. 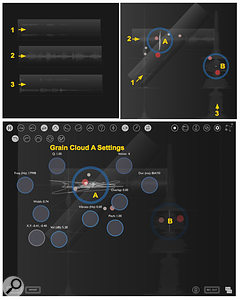 Screen 2: Three audio clips are imported (top-left); moved, resized and rotated (top-right) and played by two grain clouds (bottom).Parameters include the region of the screen from which the cloud snatches grains, the number of simultaneous grains, how grains overlap and each grain’s duration, pitch and volume. The buttons at the top of the screen select grain playback options such as shape, direction and panning as well as filter settings. Borderlands’ most unique feature is that its grain space holds multiple audio files, which you can stretch, rotate and overlap. Where files overlap the grains mix their audio. Stretching and rotating does not change grain playback, but it is useful for mixing and automation.

A good way to hear what’s going on is to create a single grain cloud with one voice, forward playback, Overlap ‘0.00,’ grain size around 1000ms and XY zone ‘0.00,0.00.’ Drag that grain cloud to different locations to see what it picks up. In addition to dragging clouds and clips around the screen, Borderlands offers grain-cloud automation and Gravity control. Automation lets you record your actions as you drag grain clouds around the screen, and Gravity lets you move grain clouds by tilting the screen. Moving and rotating clips is not recorded.

The easiest way to get audio from Borderlands to Live is to use Borderlands’ built-in recorder and then use AudioShare to upload the resulting audio file. You can upload directly to Dropbox or attach the audio file to an email (AudioShare will optionally compress it in a ZIP archive). Another option is to route Borderlands’ output to Live using MusicIO (£9.99$9.99). MusicIO comes in three parts: an iOS app for sending audio and MIDI using a USB connection, stand-alone Mac and PC apps for receiving that audio and playing it directly, and AU and VST audio-effects plug-ins for playing the audio from a Live audio track. Any audio effects inserted after the plug-in will process the incoming Borderlands audio. You can record the audio from the plug-in along with any effects processing on another Live audio track that has the plug-in’s track selected as its input.

Unlike the granular devices we’ve covered so far, Jason Grier’s free MIDI Effect Rack, Seurat MIDI, does not play or process audio — it is a Rack made entirely from Live’s MIDI effects devices (no Max For Live or third-party plug-ins). When fed a single note, Seurat MIDI generates an unending stream of notes of varying pitch and velocity. It is intended to play chunks of the samples loaded into a Sampler, which serve as its ‘grains’, but you can use it to play any instrument, including other granular synths. Read about it and download the Seurat MIDI Effect Rack along with a variety of Sampler presets here: www.ableton.com/en/blog/jason-grier-demonstration-disc.

In practice it’s a good idea to use one track for Seurat MIDI and another for its target instrument. This lets you see and record the MIDI output in all its random glory. I like to record long MIDI clips and then slice and edit them in my arrangement. When used with a granular synth or other instrument incorporating random elements, capturing the audio with each pass is also a good idea. Consider using Live’s Slice to New MIDI Track function to turn an audio clip into a Sampler or Drum Rack of ‘grains’ for Seurat MIDI to play. For example, you might try that with audio captured from Granulator II, Iota or Borderlands.